A glimpse behind the words of Loekie Morales 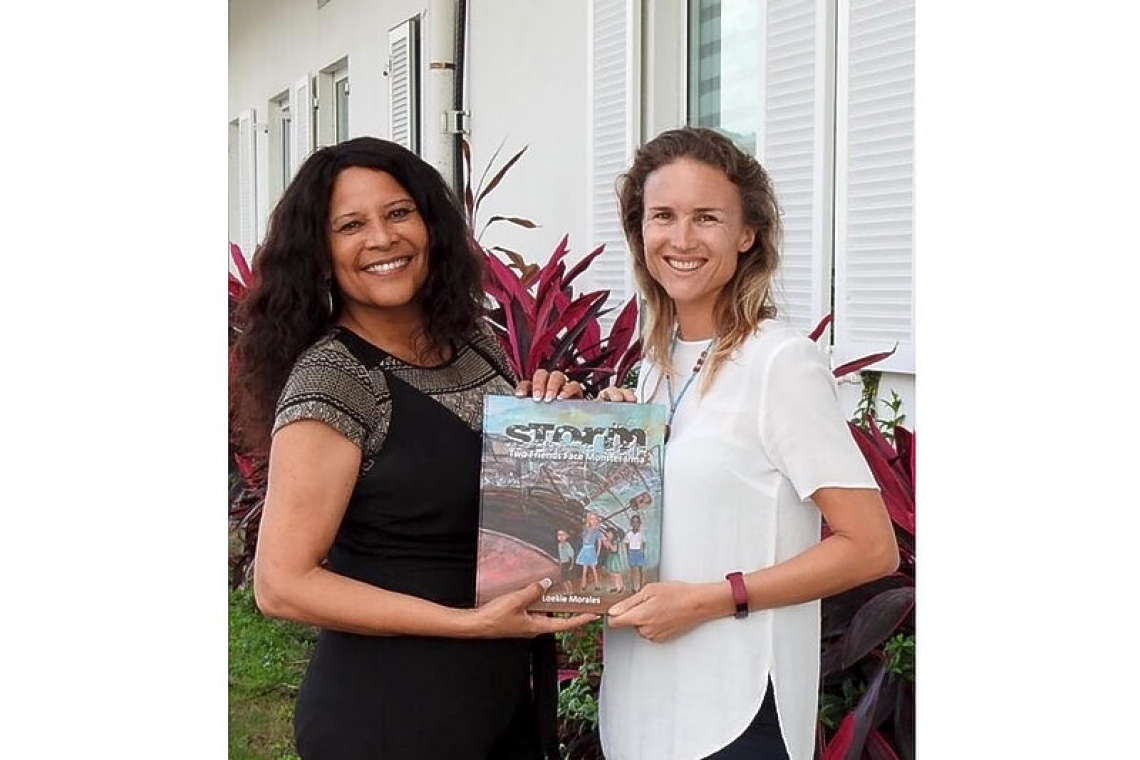 Author Loekie Morales, President of Beyond Kultura Events Foundation, held a book launch ceremony at Wasabi Charlie restaurant on Friday, January 31, for her 15th “spiritual child”, STORM. The book is about the experiences of two St. Maarten boys and their adventures during and after Hurricane Irma, which struck the island in September 2017. The book is beautifully illustrated by artist Penka Petkova, and features the winning entries of a hurricane poem contest held by Morales.

The following speech by translator Barbara van der Woude, given at the launch, offers a glimpse behind the words of the Morales, what it’s like to work and interact with her, and what is so special and significant about her work, specifically for the children of the Dutch Caribbean.

“My name is Barbara van der Woude. I am both a copywriter and teacher of Dutch and English. I have been teaching kids in the Caribbean for five years now. Loekie and I met for the first time when I was still writing my own book Resilience, which is also about Irma.

“I translated Loekie’s 15th book, STORM, together with Rietje. You might think that translating is boring: you run it through Google translate, check for quirky things that happen in that process, and you’re there. Well, that is essentially true. However, translating for Loekie is something else.

“First of all, I will admit to being slightly star-struck when I first actually met Loekie. I have been teaching Dutch and English to kids in the Dutch Caribbean for quite some years now, and Loekie Morales is like the Roald Dahl/J.K. Rowling/Anne M.G. Schmidt of the Dutch West Indies. In other words, she is quite a name in Caribbean kids literature, for very good reason.

“Let me explain this. These days, it is hard to get kids to read. And in the Dutch Caribbean, it’s even harder. It’s not that there are not enough good children’s books. On the contrary, there’s an abundance. And with Kindle and other e-readers access to good books is also hardly the problem. The problem here is that most Dutch and English books are about stuff that kids here don’t identify with.

“A Dutch children’s book would for example describe Jantje going to the train station with mama en papa to pick up oma, grandma. It’s not that a Sint Maarten kid does not understand this when he reads it, but he doesn’t recognize the scene.

“First he would think; ok, a train. I know what it is, but I have never seen one in my life. Second, he thinks: what’s grandma doing living so far away from the kid? She should live with mama en papa, or at least next door.

“Because a lot of kids here are used to their grandparents playing a significant role in raising them; as a teacher, I talk to a lot of grandparents instead of the actual parents. And that is why Loekie’s books are so important. Kids in the Dutch Caribbean can identify with the stories. But that’s not all. Loekie as a person also has a very specific style that really appeals to kids.

“I sometimes feel like she views the world like a kid herself. She sees the things that kids see. She would tell me about herself, growing up on Curaçao: 'I didn’t really know my dad, there were eleven of us, then my mother died when I was still young and I had to move around a lot. But I was so fortunate, because I got to live with people who taught me how to speak Dutch really well, and I was just so lucky.'

“When I listened to this, being the privileged Dutch kid that I am that picks up grandma from the station, attending elitist American College like it was the most ordinary thing in the world, I just looked at her in amazement. ‘You consider yourself lucky? Really?’ I asked.

“But that is Loekie. She sees the wonder, and she spots little things that ordinary grown-ups don’t see. And gets really excited about them too, also on paper. Rietje and I used to have a name for those particular 'outbursts on paper'; we would call it 'a Loekie’.

“It's when she starts writing in all caps and putting comma’s in weird places (sorry, I am a nerd). Then Rietje and I would go over it and look at each other and be like: is that even correct? Can we go with that? But we always decided: it’s a Loekie. So we best leave it in.

“Even with the theme of Irma, which is a heavy theme for a children’s book, she was able to maintain that lightness, that wonder, and of course 'the Loekies'. I am still figuring out how exactly she pulled that off. And an important thing too. Because we might think that kids, growing up so fast with a lot of things happening, have pretty much forgotten about Irma.

“It’s been 2.5 years. But just the other day in school I realized that is not the case at all. I was trying to explain to my class what a pivotal moment in a novel was - an event after which nothing would be the same anymore.

“So I asked them to think about this: what has been a pivotal moment in your life? Was that going to high school, moving to this island, the day your little brother was born, or the day your cat died?

“And they all looked at me like: are you serious? Is that even something that you have to ask us? Duh, Irma. The hurricane has, without a doubt, been THE pivotal moment in these kids’ lives.

“So, Loekie, apart from this being an intense but also lovely story, what you’ve done is very important for so many reasons. For kids in the Dutch Caribbean having something to read that they can actually relate to, for them to process Irma and even for parents to understand what kids talk about, what goes on in their minds after such catastrophic events.

“Anyways, I hope you guys all buy tons of either the Dutch or the English version, or of course both, of STORM, because I would like to say thank you to Loekie. I admire you and your books are ever so important. Please write at least fifteen more.”