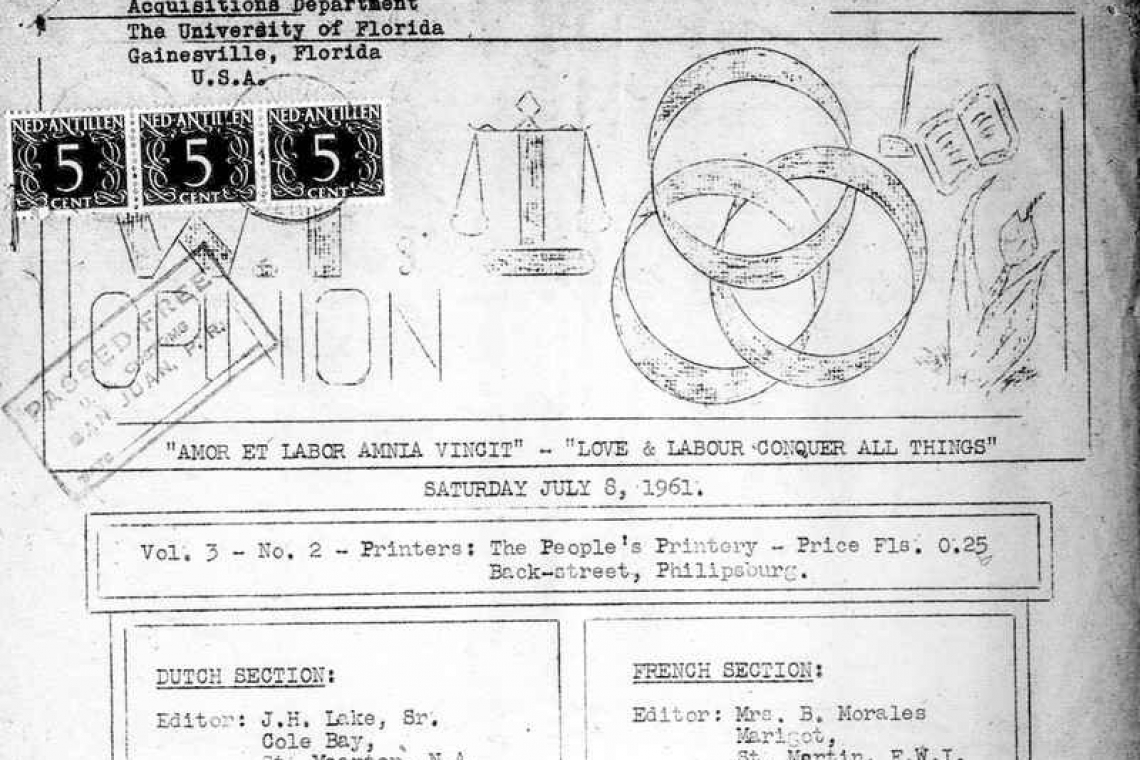 The Digital Library of the Caribbean includes many resources about the region, including archives of old newspapers. Sadly, there aren’t many from St. Martin. Happily, there are some issues of the Windward Islands Opinion from the early 1960s.

The Opinion from July 8, 1961, is just ten pages long, but packed with insights and observations about the island. The front page is dedicated to “Man of the Week” Charles E. Gibbs from Cripple Gate. Gibbs is praised for his work at the Post Office and his active role in the Methodist Church. Though he is the focus, it is clearly important that his daughter is the “Post-Mistress in charge of the Post Office at Marigot.” The article is about honest work, family and the progress of a people.

The paper is like a conversation with its readers: “Our readers of Simpson Bay have again called our attention to the fact that nothing has yet been done about repairing the public cistern of this little town.” The cistern was damaged during Hurricane Donna in 1960. With the peak of hurricane season coming, the readers and the paper were worried about a resource that people still depended on.

Cricket was clearly popular at this time. Three cricket-related articles were published in this issue, including a notice that “a friendly game of cricket will be played between the girls of Philipsburg and those of French Quarter either on July 13, or on July 14.” Due to a lack of players from Philipsburg, it was planned as a “scratch-match between the two teams with each side consisting of players from both teams.”

A letter to the editor lamented the loss of agricultural education. “Some years ago, it was possible for the boys of our island to learn the science of agriculture here in the schools. During the course of that time, it was also possible for these boys to visit the Experiment Station in order to experience that which was taught to them.”

A fashionable wedding was described in detail: “The radiant bride’s gown (imported from Puerto Rico) was truly an outstanding achievement in design. The snug bodice (of rich chantilly lace over crystal satin) featured a scooped neckline and wrist-length sleeves. Shimmering organza roses focussed the attention on the silk organza full-length skirt. Beautifying the bride’s head was a sparkling tiara, which held in place a finger-tip veil of illusion net.”

This one issue includes dozens of other short items. There are complaints about the unsanitary conditions of the Marigot market under the sandbox tree and the irregular mail service between the islands. There is an article about Emancipation Day celebrations on Statia: “It is almost 100 years since freedom was given in these islands.” A 200 room hotel was planned on the French side. Would ferry owners be able to hold up progress on the Saba airport?

This paper is not just a look at the news of the day. It captures daily life in surprising detail. It reveals hopes and fears. It is a rich window into what is now almost another world entirely. Treasures like this need to be saved as a record of both history and humanity.

Do you have memories from this time? Let us know by sending a message to This email address is being protected from spambots. You need JavaScript enabled to view it. or to The Daily Herald.