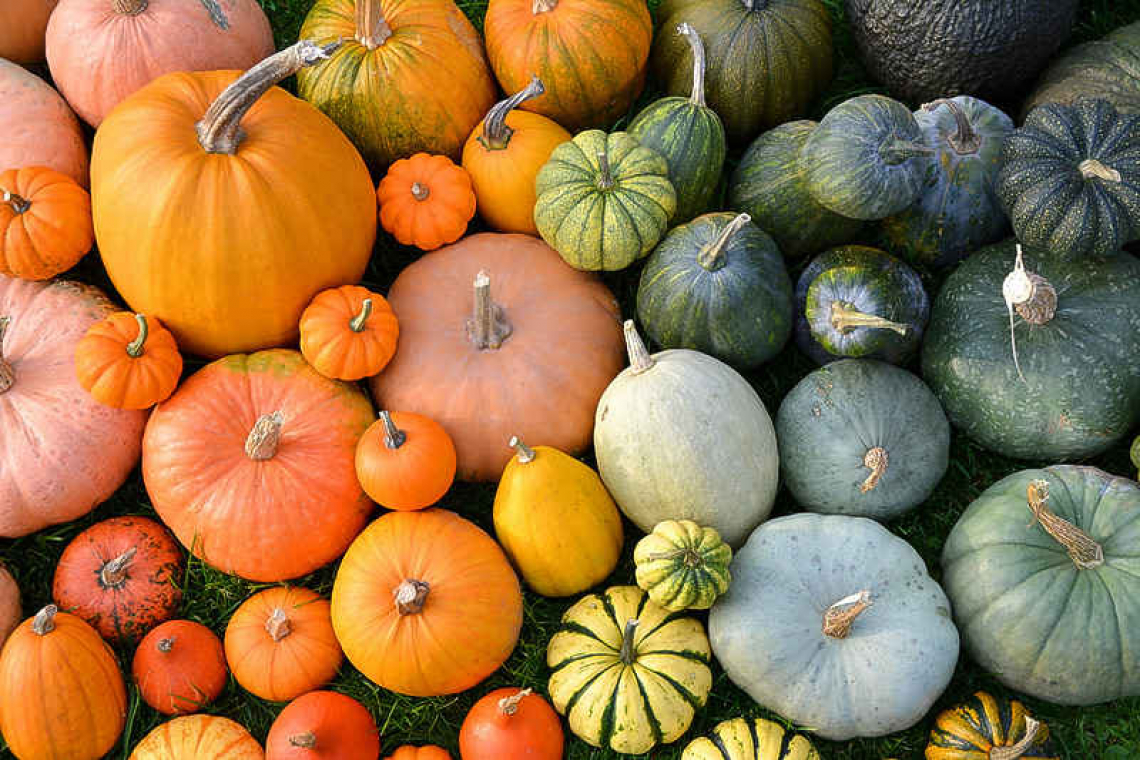 But go out in the field and view the hustling pumpkin vine.

It has the kind o' stuff in it that's needed, boy, in you,

A kind o' get there quality thet most folks say will do.

The weeds may grow around it but the pumpkin vine don't stop,

It shows it's there fer business an' it climbs right out on top.

An' if it strikes a big stone fence or ditch that may be wide,

It jes' lines out 'n strings the pumpkins on the other side.

So boy, don't let the weeds or ditches drive you from your way,

But go ahead and get on top—do something every day.

An' if things look discouraging, don't ever mope or whine,

But go and learn a lesson from the hustling pumpkin vine.

Great heaps of pumpkins laid out for Halloween and Thanksgiving are more than food. Their bacchanal, natural richness fuses our love of traditions and superstitions with a distinctive vegetable. Deeply coloured, they link to other realms, symbols of motherhood, or heaven, or kitchens. They may be carved into Halloween patterns, decorated around windows, eaten as vegetables, soups, breads or desserts, drunk in spiced beer or coffees. The seasonal squash occupies a treasured niche in our kitchens, calendars, cultures and memories. Through the next months, pumpkin recipes will be widely borrowed, tweaked and intertwined into a medley of festive winter delicacies.

Pumpkins have been cultivated for over 8000 years, initially in the Americas. Botanically they are an enlarged vine berry or pepo. They travelled widely and are often used as the first solid food for infants. Nhopi was our treat in Zimbabwe, made with roasted pumpkin and peanut butter. Older children had nhopi with muboora, the boiled pumpkin leaves. Rich weaning flavours based on home-cooked calabaza are likely to be less sugary, less expensive and more nourishing than trendy pouch foods.

Consider the nutritional values of this fruit of a vine, defined by some as incredible. Three tablespoons of its flesh counts as one of your five daily vegetables. It is low in calories but rich in minerals, particularly iron, zinc and calcium. Carotenoids give these melon vegetables their yellow or orange colours, also conferring powerful benefits to the immune system, working like vitamin A. Vitamins B and C are there too. Pumpkins have powerful antioxidant activity. This nutrient combination makes pumpkin a good treatment for anaemia, like spinach. A novel carbohydrate that has the potential to reduce blood sugars was isolated from pumpkins recently – this benefit has been described for generations by Mexican herbalists. One unsung but really valuable component is the fibre content of this vegetable. Fibre cannot be digested in our omnivorous gut systems. It is made of indigestible carbohydrates, often called roughage. Fibre feeds the bacteria in our bowel, reducing our absorption of glucose, cholesterol and other fats. Those with diets rich in fibre have lower blood pressures, less inflammation and longer lifespans – fibre is a crucial food.

Pumpkin seeds are nutritious and medicinal. Their oil contains antioxidants and carotenoids, just like the flesh of the pumpkin. This oil can be used to replace animal fats in the kitchen. But a particularly powerful property of these seeds has been described for centuries by Chinese healers – as a remedy for schistosomiasis. Schistosomiasis, or bilharzia, is a worm infestation of the bowel or bladder that was once relatively common in the freshwater ponds and rivers of Caribbean islands, including St. Martin. It caused significant illness and large public health campaigns were needed for its eradication. Treatments for schistosomiasis have improved, but drug-resistant parasites are beginning to be found in south-east Asia. Two months ago, Egyptian investigators reported that pumpkin seed oil killed schistosomes in several different stages of their development. A pumpkin remedy may prove a particularly valuable tool for this tropical disease.

Globally, we are becoming heavier, consuming more meat and sugar and fewer vegetables. During the pandemic, home-cooked food has proved to be almost a vaccine against chaos. Those Covid cooking moments should encourage us to look at the vegetables in our kitchens. Just how often are we preparing and consuming them, rather than consigning them to the trash? When did we last prepare a potage, a talkari, or use up vegetables for breakfast with a roti? As a catwalk star of vegetables, an environmentally-friendly, sustainable, local vegetable, the pumpkin provides good reasons to eat less meat and support planetary health.

It is worth promising ourselves and our children more pumpkin in 2021. Is it the year to grow a few in the backyard? Perhaps it is time for culinary nostalgia and persistence too, with some of grandmother’s recipes.