“I felt great on the day that I took the blood test.” ~ Gordon Snow on surviving prostate cancer 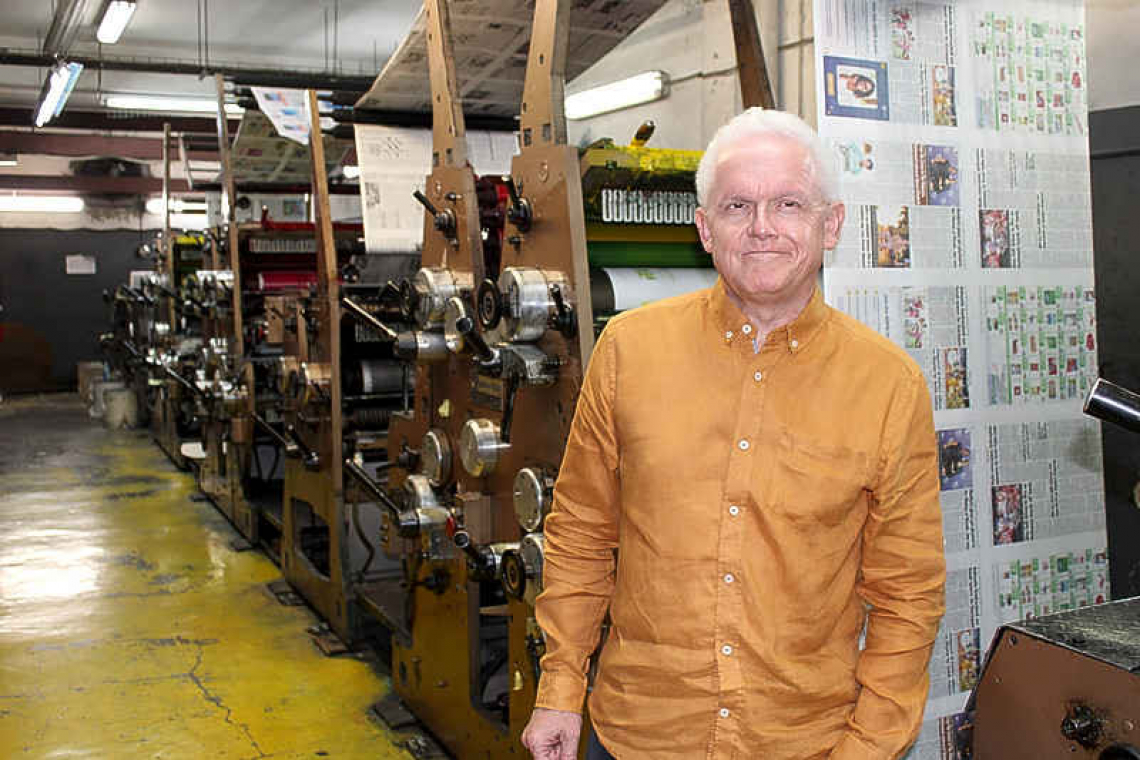 Photo: Managing editor of the Daily Herald Gordon Snow in the newspaper’s printery.

When Gordon Snow, Managing Editor of The Daily Herald, walked into his doctor’s office for his annual check-up, which was a few months late due to the pandemic, he felt great. But looking back, it was a check-up he would never forget – the blood test was the first step in discovering he had prostate cancer. With early detection and decisive action, he is now cancer-free and has a 99% chance of survival over the next 15 years.

Prostate cancer is the second most common cancer in men worldwide (World Cancer Research Fund International), and black men are almost twice as likely to get prostate cancer as white men and other men of colour (Prostate Cancer UK).

How did you find out you had prostate cancer? Were you experiencing any symptoms?

In late August 2021, I went to my doctor for a regular blood test check-up. I usually do this every year, but I hadn’t done so for 1.5 years due to the pandemic. Since I am over 40, it is important to do this to check my cholesterol, sugar – you name it. For men over 40, the check-up also includes a PSA (prostate specific antigen) test. Surprisingly, my PSA was 12.3, which is significantly high – usually anything under 4 is okay.

The doctor told me to go see a urologist. Thankfully, there are currently two very experienced urologists on the island: Dr. Ramos and Dr. Rojas.

A PSA-score can be higher for a number of reasons, such as a kidney infection or a growing prostate – it doesn’t necessarily mean cancer. The urologist performs the infamous “finger test” to feel around for anything hard inside the prostate which might indicate a tumour; it usually does not take more than four seconds. The urologist did not feel anything hard, so he went over my kidneys and my prostate with an ultrasound machine. He then told me I had to undergo a CT and MRI-scan.

These scans gave a more confirmed indication that there was something in the prostate that they needed to look at. In total, they found six different spots that they wanted to take a closer look at. To do so, they had to take a biopsy – in total, they removed 21 samples and sent these to the Netherlands. By mid-November, the results came back: six of the 21 samples were cancerous.

What was your reaction?

After the MRI, I realised things weren’t looking too good. The first weeks were very scary for me, I could hardly sleep. You start making a bucket list and wonder where this is going: if it spreads, if you’ll need chemo; how much longer do you have – you just don’t know at what stage you are.

That feeling started turning around when I started talking to people. Normally, men are not very good talkers – they often wait till it’s too late. I started to talk to people who have had cancer or were medical experts. That made me realise how treatable prostate cancer is, and that I caught it early. It’s a slow-moving cancer. I decided I had to think solution-oriented instead of problem-oriented. This happens to so many people, I just had to go and deal with it. Ignorance only makes things worse, so I started gaining knowledge on how to deal with the diagnosis.

Because I’m a generally fit person and I was at a very early stage of cancer, operation was still an option for me. I could have opted for radiation as well, but if you do radiation first, a subsequent operation becomes too complicated. I also didn’t have a big prostate yet. For most men, the prostate grows as they age, which makes surgery complicated.

During surgery, the doctor cuts the urethra. This is because right between penis and bladder is the prostate, sort of wrapped around the urethra. If the prostate is too big, it pushes against the bladder. That is why some men experience incontinence or erection issues after surgery.

I was referred to a robotic surgeon in Panama – Leticia Ruiz at the Panama Clinic. After speaking to several men on the island, I decided to go for it. I opted for robotic rather than traditional surgery because it is more precise, and the wound is smaller. It is, however, important to note that we have two very experienced urologists on the island, and you can do the operation here.

With robotic surgery, the robot goes in through six very small holes across the abdomen above your belly button, so you don’t get a big wound. Also, there is no risk of a trembling surgeon’s hand – and a robot can twist in ways a human hand can’t. I had a zoom meeting with the surgeon, which instantly gave me a good feeling. I knew this was a person I could trust and put my body at the mercy of.

After surgery (February 2022), I stayed in Panama for about two weeks. For the first six weeks after surgery, I could not lift anything over five pounds. I needed help with groceries. I was allowed to walk, but could not do any other form of exercise – and – for a sportsman, that’s killing. But I was more than happy to oblige. For me, it’s simple; if the doctor tells me to do it, I do it.

From day one, I started walking as much as possible and tried to keep a normal routine. I also had to take injections every day for two weeks to avoid embolisms [blood clots – Ed.]. Thankfully, I didn’t have a lot of problems with the pain. I handled painkillers they gave me well and had a regimen. Of course, urinating wasn’t comfortable, but that’s the price you pay.

For the next year, I have to take a PSA test every three months. I took two already and scored below 0.1 for both.

After the operation, they analyse the organ to determine where the cancer was. In my case, 20% of the prostate was already eaten away. But no cancer cells were found in the border of the organ or surgical margin, nor in the two seminal glands that were also removed. So, the chance it will spread is negligible – and I have a 99% survival chance over the next 15 years. I was lucky; gotta touch wood on that.

What is your advice to others?

Health begins with how you live your life. However, anyone can get cancer. I shocked a lot of friends because I live a healthy lifestyle – I eat healthy, work out and avoid pork and red meat. Besides staying fit, check yourself on a regular basis and don’t take your health for granted.

I also found out that during the six recovery months that I couldn’t move much, due to first the biopsy and then the operation, my cholesterol went up significantly.

Check yourself on regular basis and don’t take your health for granted. Don’t think that if you feel alright and that you feel healthy that there’s nothing wrong. I felt great the day that I took my blood test.

I did not experience any pain in my prostate. A lot of men find out when they have pain when urinating, because the enlarged prostate presses against the urethra, but by that time, the cancer is often already in an advanced stage. So check yourself on a regular basis – also check sugar, cholesterol, and your thyroid values.

If you are experiencing any kind of pain, don’t be afraid to talk. As men, we generally don’t share things easily. But talk to your partner, or friends who might have experienced something similar, or call your doctor. Don’t wait, be macho, and think it will go away – listen to your body.

How is cancer-free life?

I’ve been very lucky: I had a scare that I have overcome. I want to be as open as possible about it. People think it’s something private; but because of this knowledge, I can do something – warn other men to go test themselves. The prostate cancer foundation has been busy over the last couple of years trying to raise awareness, but a lot of men are not open to talk about it. I had the privilege to talk to men like Mike Ferrier, who experienced the disease. Now, I’m willing to talk to others because I know how much it helped me.