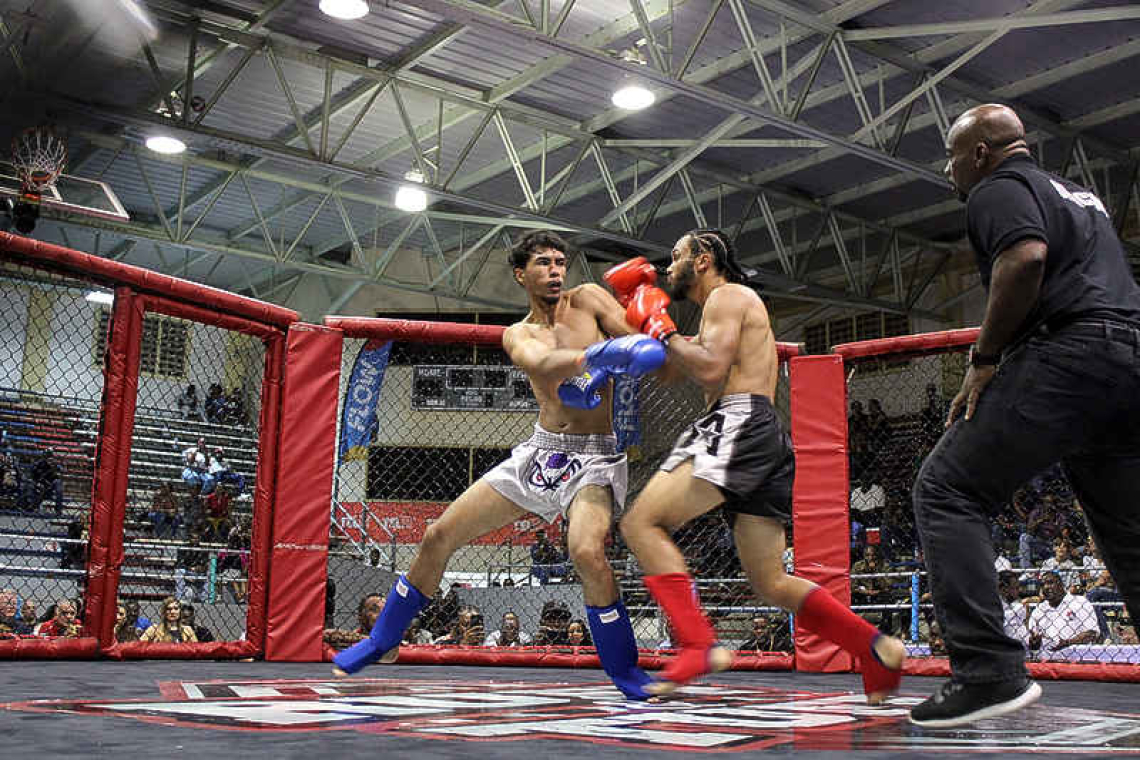 The much-anticipated event saw a revival of Kick Boxing and Mixed Martial Arts (MMA) in St. Maarten after an absence of several years. It was the first time a cage or octagon was used.
It was a great night overall for St. Maarten kickboxers with Casey Beresford winning an electrifying bout with a TKO of Martinique’s Erny Dorian who was taken out on a stretcher as a precaution for observation and fresh air but made a quick recovery.
The all-female match-up of St. Maarten’s Rollincia Charles and Martinique’s Sandrine Lindor, the first fight of the night, was declared an exhibition match with no winner due to the big weight difference of the two fighters.
Grenada’s Vincent Samawano defeated St. Lucia’s Juneiah Busette in the first MMA fight of the night while Curacao’s Christopher Elliot overcame Martinique’s Mergerie Mandel in the third kickboxing bout.
In other results, Curacao’s Keanu Irasqui defeated Martinique’s Kevin Patrice and St. Maarten’s Trinity Romney won his title fight against Jamaica’s Nicolai Reid as did Jahiem Doram against Curacao’s John Granville.
Results of the other MMA fights saw Rondell Oliver (Trinidad) win by submission in the first round against and Tevin Greenidge (Trinidad), Addison Andrews (Trinidad) won by decision against Juneiah Busette (St. Lucia), and Andrews won again against Grenada’s Vincent Samawano.
The MMA fights were organised under a round robin format and fighters fought twice before a final fight to decide the champion. Addison Andrews won the 145lb MMA belt, Vincent Samawao was second and Juneiah Busette third.
Coach of the St. Maarten kickboxers Marco London declared it a great tournament except for the absence of local champion Akeem Lewis who would have featured in the final bout.
“Akeem had an opponent and then it was found out his opponent was too heavy, and was switched to someone else and then all of a sudden, his bout was cancelled during the evening,” explained London. “It was very disappointing but otherwise all the fights went well.”
London was especially impressed with the two title fights of Trinity Romney and Jahiem Doram.
“Trinity had great technique and was dominating the fight. And with Jahiem we took a risk by putting him against John Granville from Curacao who is a semi-pro and very experienced but Jahiem took him by completely surprise and showed great skill.”
Government dignitaries present included Acting Minister of Tourism, Economic Affairs, Transport and Telecommunication Omar Ottley, Minister of Education, Culture, Youth, and Sports (ECYS) Rodolphe Samuel and Member of Parliament (MP) Rolando Brison, who each gave congratulatory remarks to the organisers.
President of Pan American International Mixed Martial Arts Association, Jason Fraser, presented certificates of appreciation to Minister Ottley and Marco London.