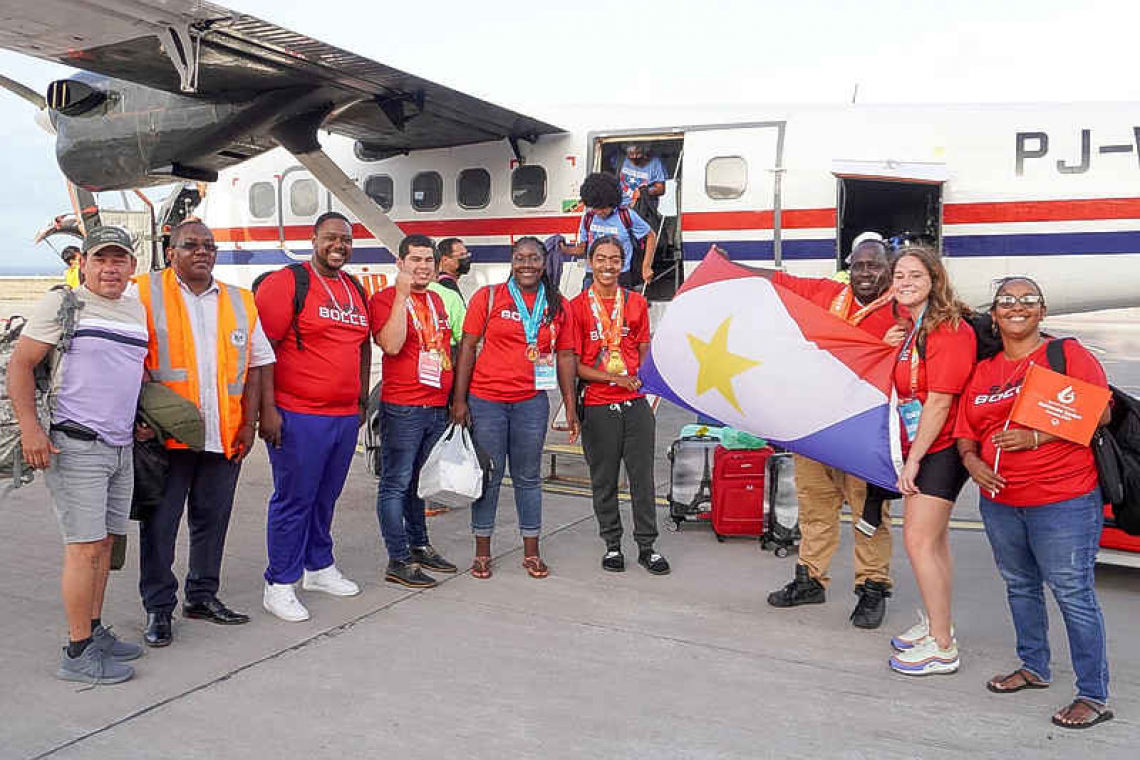 SABA--A large crowd of family, friends, and supporters gathered at the Juancho Yrausquin Airport to welcome the three Saban participants of the Special Olympics Netherlands held in the Twente region June 10-12, on Tuesday evening. The Executive Council, also a part of the welcoming party, invited the community to welcome the athletes home.

Commissioner of Health Rolando Wilson had a short message on behalf of himself and the community saying, “We are very proud to know that once again Saba has made another milestone which will go down in history. Congratulations to the Saba bocce team, their coaches, parents, and companions on a job well done. Continue training, and we hope Saba can continue participating in the future.”
The Special Olympics Netherlands is a biannual event, part of a worldwide movement in more than 190 countries that are committed to improving the lives of people with intellectual disabilities through sporting events. This year in Twente was the largest organized multi-sport event for people with intellectual disabilities in the Netherlands with 30 different sports and more than 3,000 athletes and supervisors.
The Ministry of Public Health, Welfare and Sports VWS sent an invitation to the Public Health Department for a Saban team to participate in the Special Olympics Netherlands. This was the first time Saba participated in this event, so this meant putting a team together and training them. They worked closely together to organise the logistics to make this a reality for the Saban team.
The athletes Antonio Pierre, Nacio Zaegers and Nicolas Bautista, met every Friday for six weeks leading up to the competition to learn and practice bocce, coached by Joelyn Robinson and Lauren Risley of the Public Health Department. Bocce is a ball sport played on long courts between two players or between teams of two or four players.
“Although there are a lot of team sports, we had a small group, so we chose bocce, a relatively simple game to learn in a short period, and they could play individually or in smaller teams,” said project leader Lauren Risley
The Special Olympics Netherlands was a three-day event. The opening ceremony on Friday consisted of a parade around the Fanny Blankers Koen (FBK) stadium in Hengelo, speeches by the athletes from the Netherlands, and a little party with live music.
Day two, Saturday, was the teams’ competition in which Bautista and Zaegers won gold medals. Day three, Sunday, was for the individual games in which Pierre placed fourth, Zaegers won a bronze medal, and Bautista his second gold. The event ended with a closing ceremony.
Sports coordinator Joelyn Robinson said the trip was a great experience, and the boys had fun.