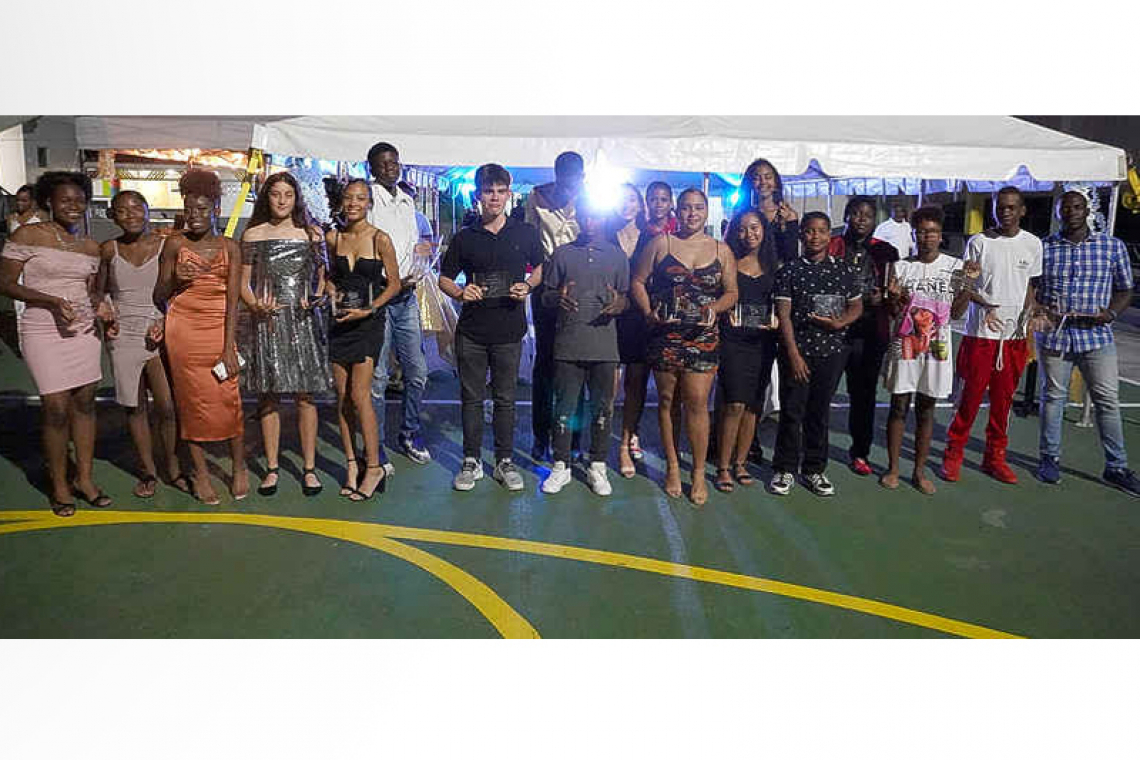 was awarded  the island’s Male Athlete of the Year. These two youngsters were selected by the coaches for excelling in athletics.

The Public Health and Sports Department of the Public Entity Saba, hosted a well-attended All-Sports Banquet for Saba’s athletes on Saturday night.

The Banquet was to showcase the commitments that the athletes have made towards sports in different ways, 25 youngsters received awards in five sports: volleyball, basketball, baseball, soccer and track & field.

Edward Zagers excelled on both a sport level and academic level and won the Student Athlete of the Year Award. He was selected by teachers and coaches.

The Sports Banquet, organized by sports coordinator Joelyn Robinson and project leader Lauren Risley, reminded the youngsters that sports are not only entertainment, but also a form of character building.  “Sports teach us to trust, teach us loyalty, teach us to tackle situations calmly and teach us that if you fail, you should never give up and practice harder.”

Commissioner of Social Affairs, Public Health and Sport Rolando Wilson said in his introductory remarks that he was proud to be part of the Sports Banquet to honor and acknowledge the athletes who have excelled, supported and promoted sports on Saba. He encouraged the athletes to keep up the good work.

Wilson said the battle to see development in the area of sports on the island had been hard, but that it was good to know that many never gave up.  “Tonight’s event truly shows that we are on the right track.

Member of the Island Council Vito Charles was the guest/motivational speaker.

He shared his personal, story of how he took up running and so far, has participated in four races within the timespan of a couple of months. Winning wasn’t the goal, he said. “The training for those runs helped me to develop a passion for running, and now I run most days of the week.”

Charles shared three things that his journey of health and fitness through running thought him about life: discipline, to not compare to others and to achieve goals. “Running is about discipline. Discipline is everything. Discipline is what wakes you up to get it at no matter what happened the day before. Some runs are good, all runs are tough, and it takes discipline to get up and run another day. Because running is not easy, especially on Saba, it’s difficult to stick to. Through this discipline, though, you develop good habits. Train your body and mind, and learn what it is to be disciplined.”

Charles said that running teaches us not to compare ourselves to others. “When you train to run you have to put in so much hard work that you’re only concerned about getting better, achieving your personal best. Imagine what your life would be like if you trained well and gave your best, if you focus on what your own achievements could be? Then we would be less concerned with the results of others and we would be able to help them develop the skills, necessary to achieve their own personal best.”

Thirdly, running is about achieving goals. “In the running world there are several distance achievements, from 5k to ultramarathons that are over 100 miles. You learn that to complete any given distance, it takes the right training, and you must have the right goal in mind. Much of running is about being uncomfortable and having the patience and trust in the training process and believing that the outcome you want to see will happen over time. We don’t train for a 5k and then expect to be able to complete a marathon.”

According to Charles, the greatest satisfaction on the day of the race was getting over the finish line and meeting your goal. “This is the process that if we took from running and applied it to other areas of life, we could see dramatic improvements in studies and careers, by simply focusing on achieving a series of goals over our lifetime.”