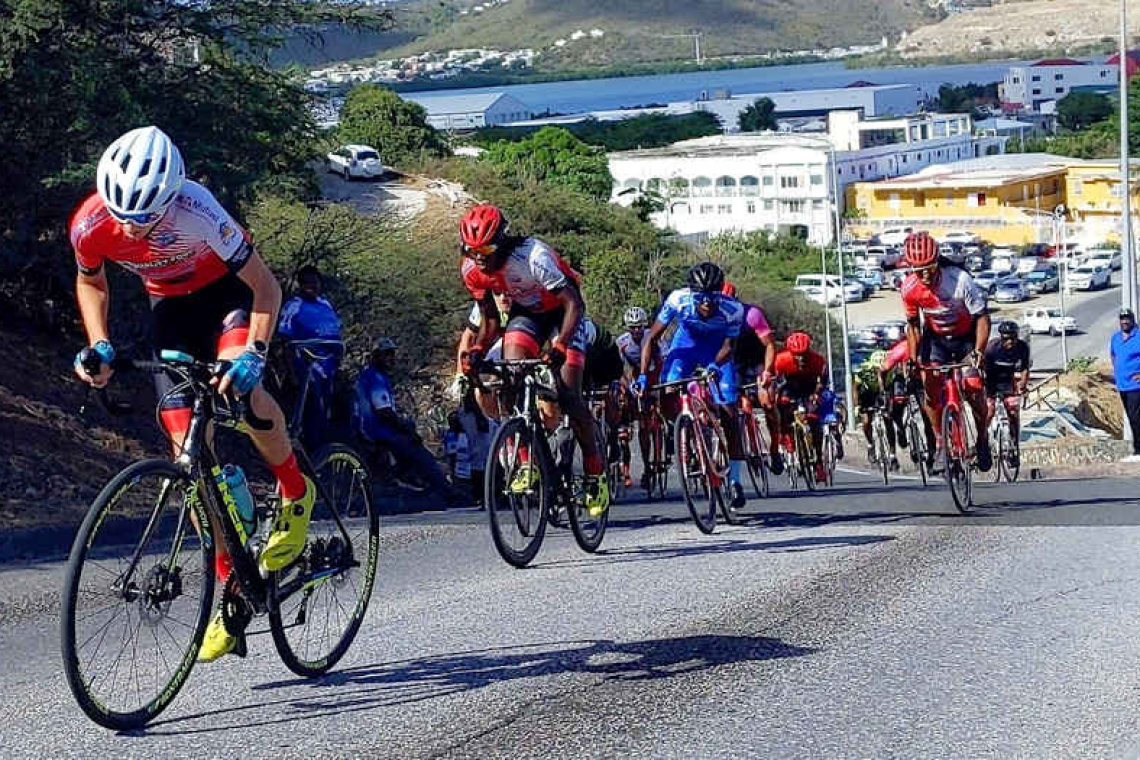 PHILIPSBURG—Sunday’s bike race organised by SXM Sport Evasion and the St. Maarten Cycling Federation was exactly that, fast and furious, with all the usual suspects gathered for an ultimate bragging rights contest.

The top two cycling clubs Association Sportif de Marigot (ASM) and Velo Club de Sandy Ground (VCSG)were well represented and it was a given that the young stars from these two clubs with their seemingly unlimited reserves of cardio and talent would shine on the day, and so they did, but veteran racers also hung in well.
There were three categories on offer; women, novice males, and an open male category that contained all the best of the best, juniors and elites, the fastest on the island, all mixed together. This latter category was the largest by far with at least 31 riders and was definitely the one to watch. Each category had a separate start, novices first, then women and lastly the open men category.
The course started from Raoul Illidge Stadium, went past Carrefour supermarket down to the Prince Bernard Bridge, turning right at the traffic lights, past the old Vlaun car dealership, past the former Great Bay Hotel and up the punishing hills towards Belair and Raoul Illidge Stadium. Women and novices were required to do four laps (20K) and elites 12 laps (60K).
As expected, there was battle for dominance between ASM’s Kianny Noel, VCSG’s Jahkim Carty (16) and Yerlin Garcia, and Juju van Heyningen (ASM). SXM Tri Academie’s Gregoire Pigeon was also in the mix pushing hard up at the front, along with Andy Guibreteau (16) who was riding for VCSG.
The final result of the open male category was Kianny Noel (ASM) first, Jahkim Carty (VCSG) second, Yerlin Garcia (VCSG) third, Juju van Heyningen (ASM) fourth, Patricio “Blade” Carty fifth, Reni Arrondell (ASM) sixth, and SXtreme Runners’s Xavier Dias in seventh place.
Dias had earlier won his age category at a 10K run in the morning while Andy Guitbreteau had also participated in the same run.
The women’s category with six riders was won by ASM’s Raymonde Gumbs Emboule, Susy Piscione (Tri Sport Tigers) was second, Severine Juminer (ASM) third, and Annee Baum fourth.
Also participating on Sunday was Anguilla’s Delroy Carty who has been selected to represent Anguilla at the Commonwealth Games in England.