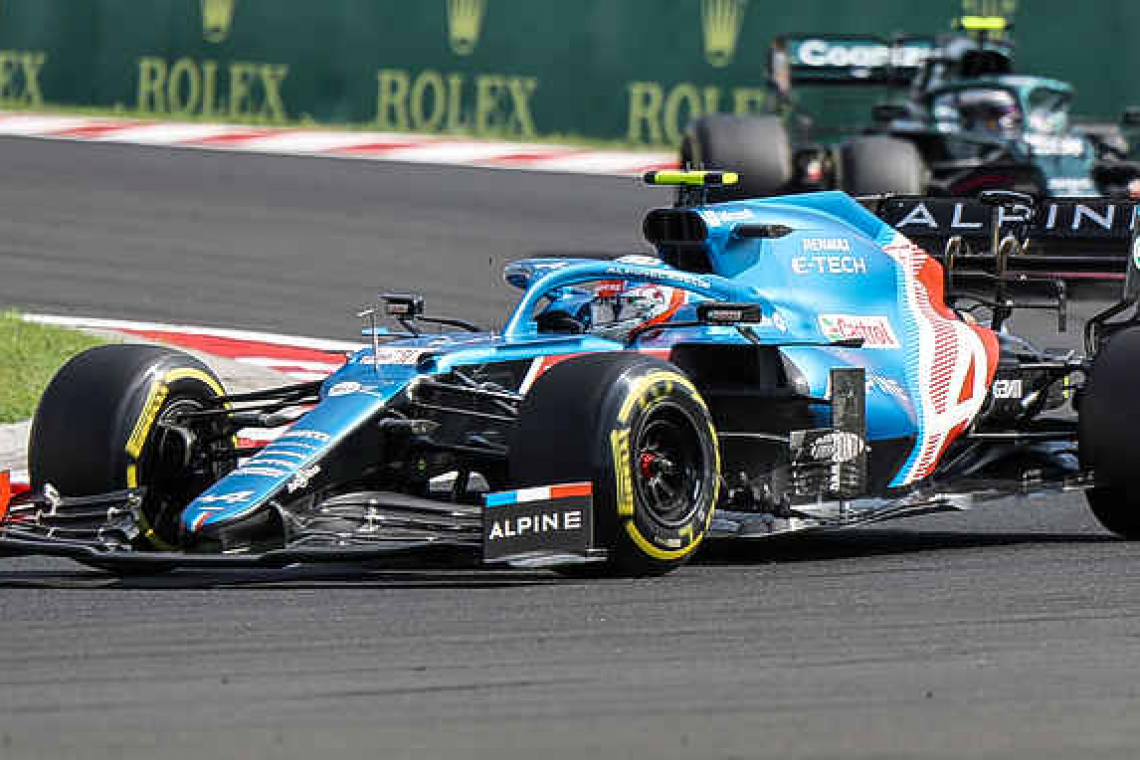 HUNGARY- - Frenchman Esteban Ocon raced to his maiden Formula One win in a chaotic Hungarian Grand Prix on Sunday, ahead of Sebastian Vettel and Lewis Hamilton, who vaulted back into the championship lead with a charging drive from last to third.

The 24-year-old Ocon took the flag 1.8 seconds clear of Aston Martin’s four-time champion Vettel, who piled on the pressure on the Alpine driver but could not get past.
Hamilton, who put in a stirring drive to recover from a strategic misstep that dropped him from first to last, very nearly caught the pair up, but ran out of laps as he crossed the line 2.7 seconds behind in the final podium spot for Mercedes.
The Briton, however, can draw consolation from turning an eight-point deficit to Red Bull title rival Max Verstappen in the standings into a six-point lead.
The Dutchman scored a single point after finishing 10th having been caught up in an opening-lap collision.
The result also handed Mercedes a 10-point lead over Red Bull in the constructor standings.

Fantastic Day
“What a moment, what a moment. It feels so good,” said an exultant Ocon, handing his Renault-owned team their first win in their Alpine guise and their first since the season-opening Australian Grand Prix in 2013 when they raced as Lotus.
“It’s the first victory since the Renault group came back into Formula One.
"It’s been a fantastic day,” added Ocon, who also became the first Frenchman to win in a French car since Alain Prost with Renault in 1983.
Starting eighth and 10th respectively, neither Ocon nor Vettel were thought to be remotely in contention for a race expected to play out as a straight fight between pole-sitter Hamilton and third-placed Verstappen.
But carnage on a wet opening lap and a strategy error wrong footed both title protagonists.
McLaren's Lando Norris smacked into the side of Verstappen's Red Bull after being tagged by the slow starting Mercedes of Valtteri Bottas, who went on to collect the other Red Bull of Sergio Perez, putting both cars out of the race.
That incident and a collision between Ferrari’s Charles Leclerc and Aston Martin's Lance Stroll brought out the safety car before the race was halted on the second lap.
Verstappen’s crew tried to repair his car during the interruption but the Red Bull had suffered far too much damage to bring the Dutchman, now in 13th, back into contention.

Hamilton Setback
Hamilton suffered a setback of his own as he lined up alone for the restart on intermediate tyres on a bone-dry grid even as the rest of the field peeled off into the pits.
He pitted a lap later but came out last, scything through the field in a charge that saw him engage in a potentially race-deciding duel with Fernando Alonso, who finished fifth and was voted 'Driver of the Day' by fans.
“We always make it difficult for ourselves ... but these things happen and we learn from them,” said Hamilton, who was denied a landmark 100th career win and a record ninth in Hungary.
“I gave it everything and I had nothing left at the end,” added the Briton, who had to be looked over by the Mercedes team doctor after suffering fatigue and dizziness on the podium.
Carlos Sainz took fourth for Ferrari ahead of compatriot Alonso.
AlphaTauri's Pierre Gasly, the last Frenchman to win a race, finished sixth and took the point for fastest lap.