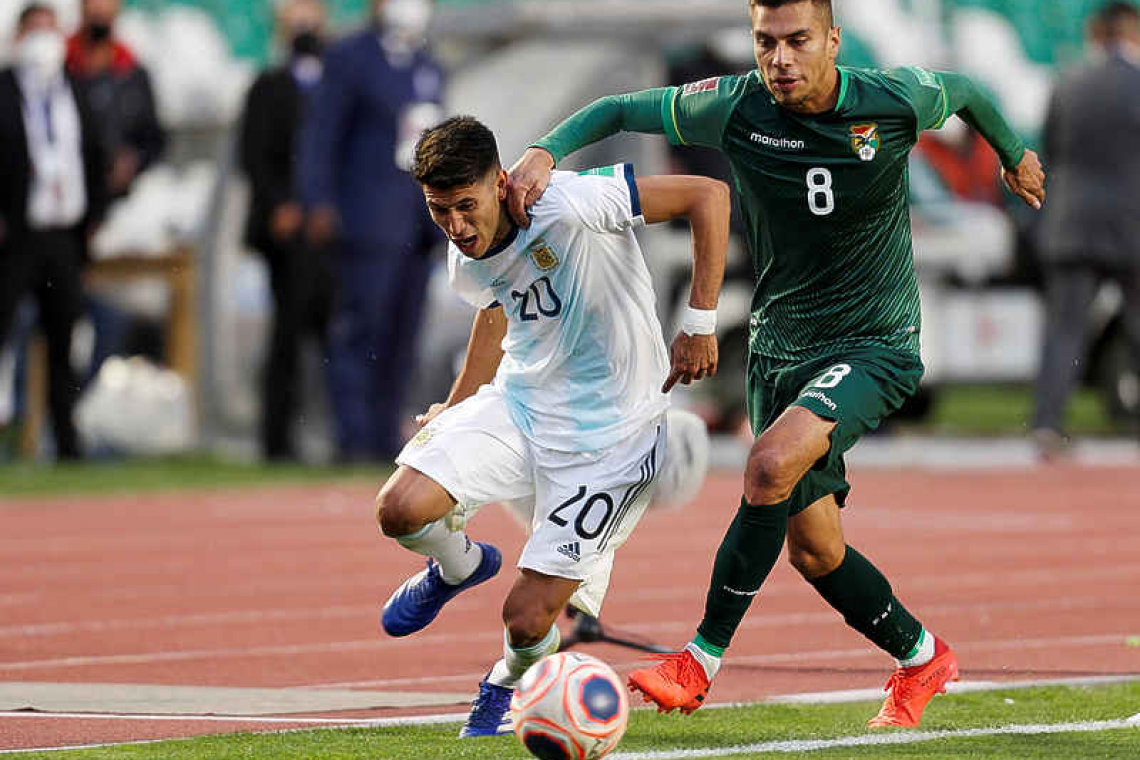 LA PAZ- - A late goal from Joaquin Correa helped Argentina come from behind to beat Bolivia 2-1 on Tuesday and maintain their 100% record in the South American World Cup qualifiers.

Bolivia took the lead after 24 minutes when captain Marcelo Martins rose unmarked to head home a cross from the left.
However, Argentina, who beat visitors Ecuador 1-0 in their opener last week, equalised seconds before halftime when a clearance from defender Jose Maria Carrasco hit Lautaro Martinez just yards from goal and flew into the net.
Correa then got Argentina’s winner with a sweet left-foot strike 11 minutes from the final whistle as Bolivia suffered another defeat following their 5-0 thrashing away to Brazil last week.
The result was Argentina’s ninth game unbeaten under coach Lionel Scaloni and their first win in Bolivia since 2005.
It came in spite of their evident troubles with the thin air, with the game being played at high altitude in La Paz, and some of their players took gulps of oxygen at the side of the pitch during a busy second half in which they dominated their rivals.
Martinez could have had a hat-trick but scooped one chance over the bar and had another well saved by the Bolivian keeper.
"We knew what this game meant to us because of its history," the Inter Milan striker said. "We're not going to deny that it's difficult to play here."
"I think this team showed lots of heart and lots of brains. We're very happy."
Lionel Messi was another outstanding performer for the visitors, although the Barcelona forward played a deeper role than usual and was more of a creator than taker of chances.
The result was a disappointment for Bolivia, who were attempting to record back-to-back wins over Argentina for the first time in their history.
Bolivia have started the qualifiers for the 2022 tournament with two consecutive losses.
Their next two opponents in November's double header of matches are Ecuador and Paraguay, while Argentina will face Paraguay at home before traveling to Peru.
The top four sides in the 10-team South American group qualify directly for Qatar 2022 and the fifth-placed side goes into an inter-regional playoff.