Barcelona dumped out of Cup by last-gasp Athletic strike 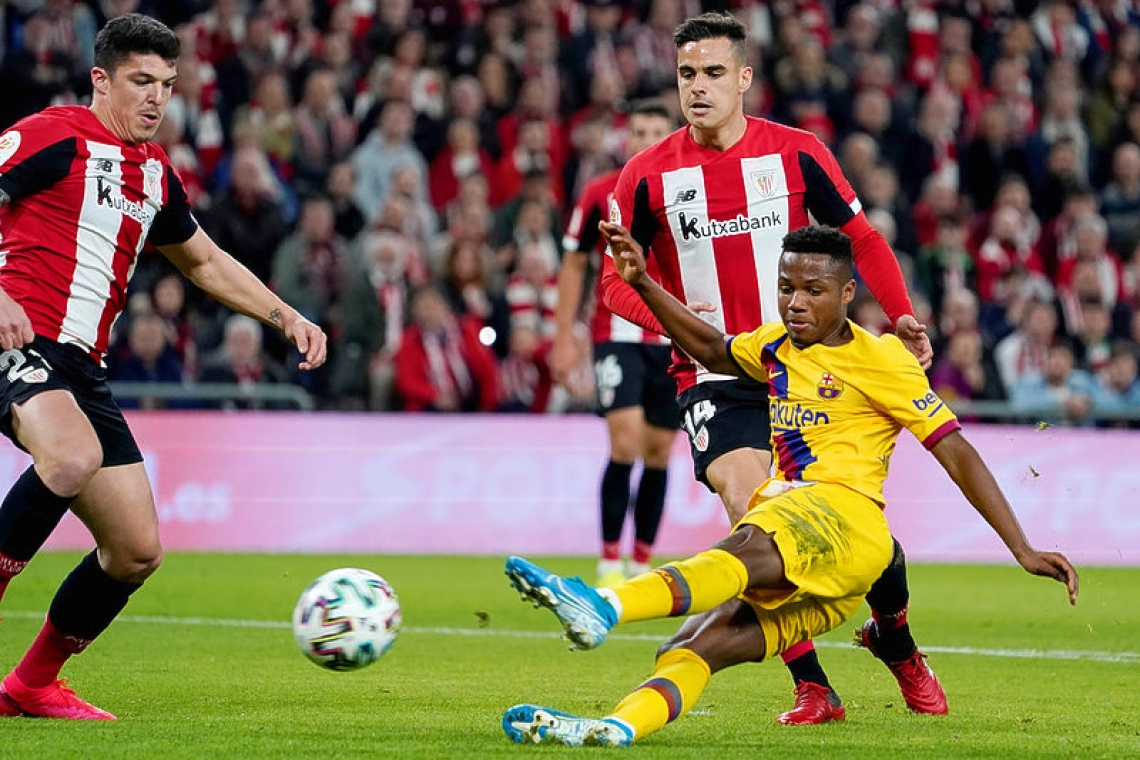 BILBAO, Spain-- Record 30-times winners Barcelona were sent crashing out of the Copa del Rey in a 1-0 defeat at Athletic Bilbao on Thursday after a stoppage-time header from Inaki Williams.

Spanish striker Williams glanced a cross into the bottom corner to spark jubilant scenes at a rocking San Mames stadium and recalled Aritz Aduriz's added-time goal in Athletic's 1-0 home win over Barcelona on the first day of the Liga season.
They join Real Sociedad, Granada and second-tier Mirandes in Friday's semi-final draw, which will not include Real Madrid, Barcelona or Atletico Madrid for the first time in 17 years.
The defeat heaped more misery on Barcelona in a tough week for the Catalans in which captain Lionel Messi spoke out against sporting director Eric Abidal and forward Ousmane Dembele was ruled out for the rest of the season with a hamstring injury.
Barcelona defender Gerard Pique said the team needed to show unity and refrain from in-fighting, adding that the performance, if not the result, proved that they had moved on from the saga.
"Now is not the time to air our dirty laundry, all I can say is we have 100% confidence in ourselves and we are pleased with how we played today and how we have reacted in the face of all this noise," he said.
"It's very tough to have been knocked out but we can take a lot of positive things from the game."
Coach Quique Setien said he was hurt by the elimination but was pleased with the display.
"Today everything went well apart from the result," he said. "We took a step forward in our play and I'm pleased with many things we did, I'm not only looking at the result."
Messi spurned a glorious late opportunity for the visitors when he could only shoot at the legs of Athletic keeper Unai Simon and his fellow striker Antoine Griezmann also went close in the second half.
The game looked to be heading into extra time when Williams missed a gilt-edged chance but he made amends by getting the slightest of touches on a cross from Ibai Gomez in the third minute of stoppage time.
"I'm lost for words, you should never lose faith," Williams told reporters. "The fans deserved this moment after the way they supported us and I now hope we can go on and fulfil the dream that we all have by going on to win it."
The victory must have felt like redemption for Athletic, who were knocked out of the Cup by Barcelona in 2017 and 2016 and lost to them in the final in 2009, 2012 and 2015.
The Catalans have appeared in the last six finals but they joined Real Madrid in being knocked out after Zinedine Zidane's side were beaten 4-3 at home by Real Sociedad earlier on Thursday.