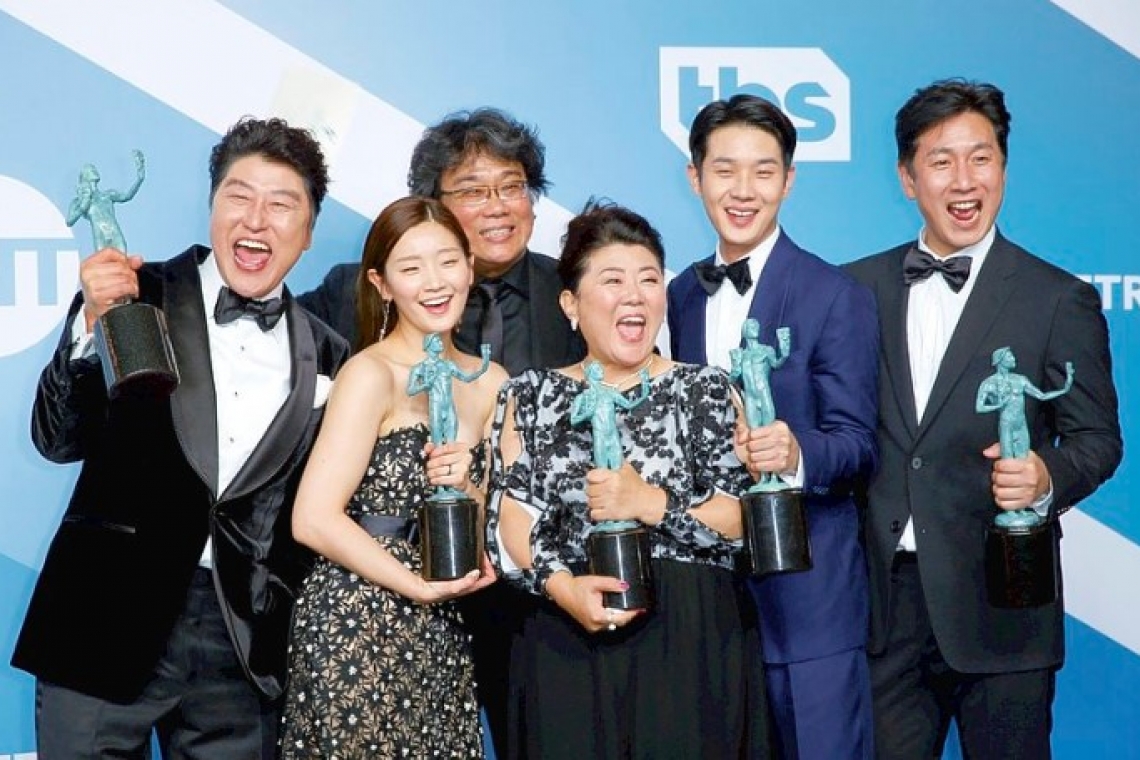 LOS ANGELES--South Korean thriller "Parasite" was the upset winner at the Screen Actors Guild (SAG) awards on Sunday, while Joaquin Phoenix and Renee Zellweger were named best actors, cementing their roles as frontrunners at the Oscars next month.

"Parasite," the Korean language social satire about the wealth gap in South Korea, was the first film in a foreign language to win the top prize of best cast ensemble in the 26 year-history of the SAG awards. Despite an unknown cast, it beat homegrown Hollywood movies "The Irishman" and "Once Upon A Time in Hollywood" which both have A-list stars.
The SAG awards, which focus entirely on performances, are closely watched as an indicator of Oscar success because actors form the largest voting group in the Academy of Motion Picture Arts and Sciences. "Parasite" director Bong Joon Ho said backstage that no-one could predict what might happen at the Oscars on Feb. 9
Speaking through an interpreter he added; "It is true that the momentum is building and we are a part of the awards race and campaign. But what happened today, what’s truly important, is that these actors were acknowledged by fellow peers as the best ensemble cast of this year."
Phoenix's terrifying performance as a loner who finds fame through violence in "Joker" has swept awards season. "I am standing on the shoulders of my favourite actor - Heath Ledger," Phoenix said on Sunday, referring to the actor who won a posthumous Oscar in 2009 for his turn playing the comic book villain.
Zellweger, likewise, has picked up most of the prizes so far for her performance as a desperate, aging Judy Garland in biopic "Judy".
Brad Pitt picked up another trophy for his supporting role as a charming stunt man in "Once Upon A Time in Hollywood," while Laura Dern was named best supporting actress for playing a ruthless divorce lawyer in Netflix domestic drama "Marriage Story".
"It was a difficult part," quipped Pitt of his role. "A guy who gets high, takes his shirt off and doesn't get on with his wife. It was a big stretch," he said to laughter, riffing on his own life as a twice-divorced Hollywood heartthrob.
Sexual harassment drama "Bombshell" went into Sunday's awards with a leading four nods but emerged empty-handed. Martin Scorsese's $170 million Netflix gangster movie "The Irishman" had another disappointing night, despite a cast that includes Robert De Niro, Al Pacino, and Joe Pesci.
Several of the contenders for best picture at the Oscars on Feb. 9 were not nominated for best movie cast ensemble at SAG. Those left out include immersive World War One film "1917," the big winner at the Producers Guild Awards on Saturday, as well as "Joker," "Marriage Story," and novel adaptation "Little Women".
De Niro, whose lead performance in "The Irishman" has been snubbed by the Oscars, Golden Globes and SAG, was given a lifetime achievement award at the SAG dinner and used his speech to take a veiled shot at U.S. President Donald Trump.
In television, Jennifer Aniston was an upset winner for her role as a TV anchor in "The Morning Show," bringing the second award this year for the new Apple TV+ streaming service. Her co-star Billy Crudup won a Critics Choice award last week.
Comedy "The Marvelous Mrs Maisel" and British royal drama "The Crown" took the prizes for their TV ensemble casts. But "Mrs Maisel" actress Alex Borstein said the comedy prize should have gone to quirky British comedy "Fleabag".
Moments earlier, "Fleabag" creator Phoebe Waller-Bridge accepted the best television comedy actress statuette, capping a year of multiple awards for her and the show.
"This whole thing has been a dream and if I wake up tomorrow and find it's been just that, thank you. It's been the most beautiful dream," Waller-Bridge said.