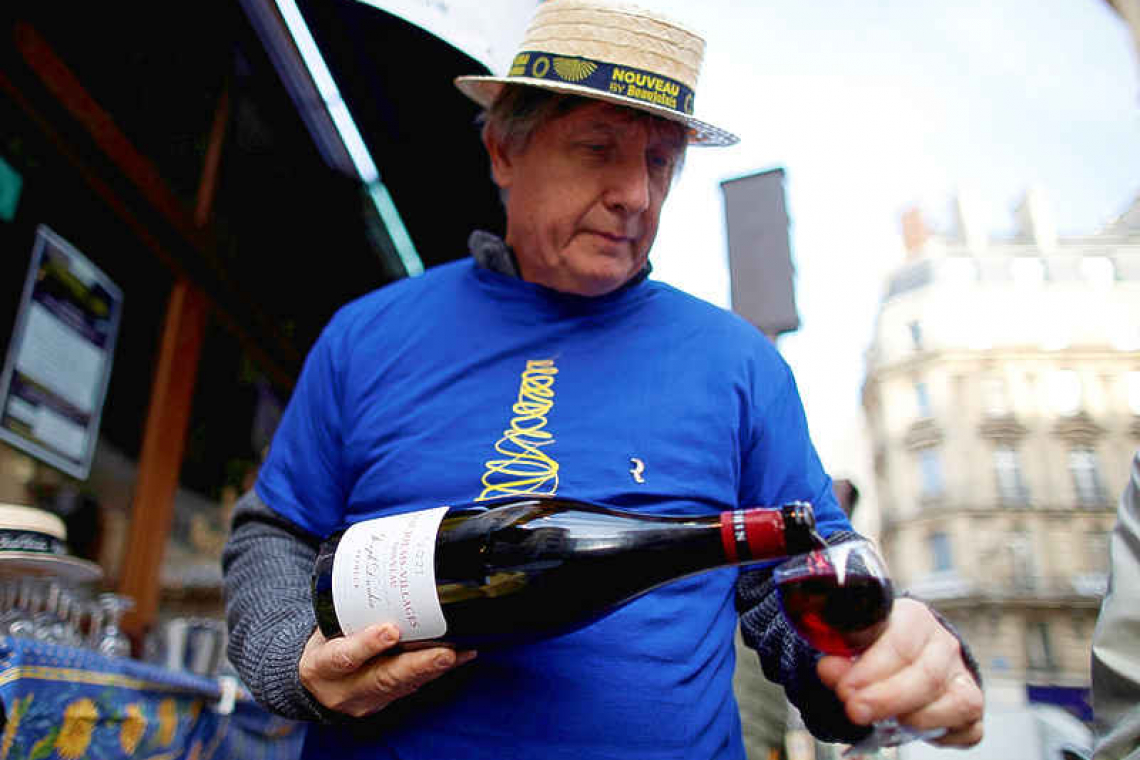 PARIS--French wine lovers washed away the misery of months of coronavirus social distancing and a wet summer that weighed on wine output, welcoming the new Beaujolais in bars across the country.

Every autumn on the third Thursday of November, wine growers from the Beaujolais region market the first bottles of the year's harvest in the annual "Le Beaujolais Nouveau est arrivé" campaign that started in the 1960s.
"If there is one day we can call a day of renaissance, after all the crises we have lived through, it is today," said Le Mesturet owner Alain Fontaine as he served free glasses of Beaujolais on the sidewalk in front of his Paris restaurant.
Parisians loved the free wine, even if Beaujolais - a light red wine that is just a few weeks or months old - struggles to overcome an image of being cheap plonk. "It's a nice little wine. It's not the biggest grand cru, obviously, but it is pleasant and not very expensive," said Felix, an employee at the French national library.
Wine growers were less upbeat as France is set to produce its lowest wine output since records began, after vineyards were hit by spring frost, hail and disease. The farm ministry has forecast total production a quarter below the average of the past five years with the Burgundy-Beaujolais region's output among the worst hit, seen down by nearly half.
"The year has been quite hard weather-wise and the grapes have required more manual work than usual, only for us to end up losing around 30% of the harvest. That's too much work for such meagre results," said Beaujolais Nouveau winemaker Julien Revillon in Villie-Morgon, north of Lyon.
Revillon said that even though output has been disappointing, people are more than ever attached to the Beaujolais tradition, seeing it as an opportunity to get together with friends and colleagues after months of isolation. "In difficult periods, people hang onto traditions. Even during a war, we want to celebrate Christmas, even during a pandemic, we want to celebrate the Beaujolais Nouveau," he said.
Ninety-year-old Parisian Marie-Francoise, who initially found the new Beaujolais too tart, changed her mind after a second tasting. "It’s a good wine, a very good wine. There is no better Beaujolais!" she said.