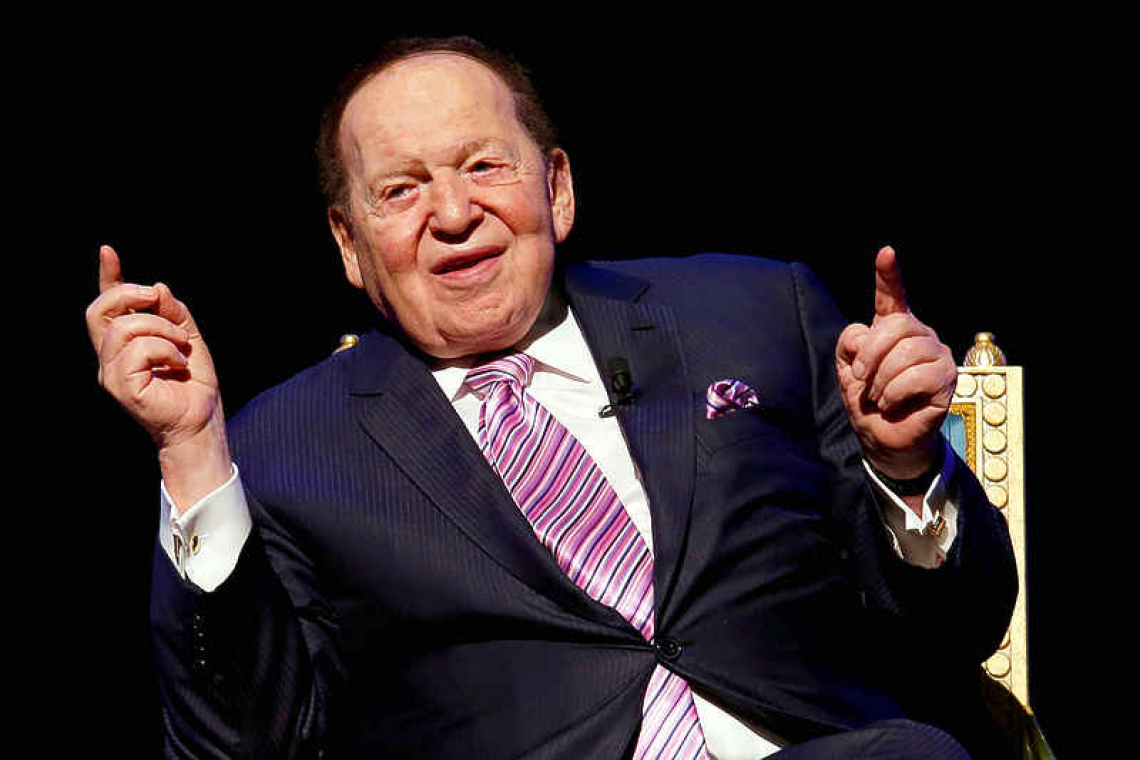 LAS VEGAS--Combative self-made billionaire Sheldon Adelson, who assembled the world's largest casino empire and used his fortune to nurture conservative politicians and policies in the United States and Israel, has died at age 87.

The American casino mogul, raised in a poor Jewish immigrant family in Boston as the son of a cab driver, established lavish hotels and casinos in Las Vegas, Macau and Singapore, and headed the world's largest casino company, Las Vegas Sands Corp.
Adelson's wealth made him a formidable figure in American and Israel politics and in the news media. He was a vigorous supporter of U.S. President Donald Trump, former U.S. President George W. Bush and Israeli Prime Minister Benjamin Netanyahu as well as a prolific donor to U.S. Republican politicians and foe of Democrats, including former U.S. President Barack Obama.
"He was an American patriot, a generous benefactor of charitable causes, and a strong supporter of Israel," Bush said in a statement.
Adelson died on Monday night from complications related to treatment for non-Hodgkin's lymphoma, a cancer of the lymphatic system, Las Vegas Sands said in a statement on Tuesday.
With a net worth of $33.4 billion as of this week, Adelson ranked as the world's 38th richest person on the Bloomberg Billionaires Index. Known for his extensive philanthropy and business ventures in Israel and donations to Jewish causes, Adelson counted Netanyahu as a close friend.
"Sheldon's tremendous actions to strengthen Israel's standing in the United States and the connection between Israel and the (Jewish) Diaspora will be remembered for generations," Netanyahu said in a statement.
Adelson and his Israeli-born physician wife Miriam gave more than $218 million to Republican and conservative causes in the 2020 U.S. election cycle, according to the Center for Responsive Politics, which tracks political spending, more than anyone else.
They were prolific backers of Trump's 2016 presidential bid and remained supportive throughout his turbulent presidency. The casino magnate was in regular contact with Trump after he took office and saw some of his cherished goals relating to Israel come to fruition including the moving of the U.S. embassy to Jerusalem in a break with decades of American policy. Adelson attended the embassy dedication ceremony in May 2018.
"I'm against very wealthy people attempting to or influencing elections. But as long as it's doable, I’m going to do it," Adelson told Forbes magazine in 2012.
Adelson, a college dropout, was short and stocky, had thinning red hair and in later years used a motorized scooter because of a medical condition that made it difficult to walk. But his appearance belied his clout and drive.
His empire in the United States, Macau and Singapore was exemplified by the Venetian resort casino in Las Vegas, which boasted replicas of landmarks from Venice, Italy, like canals, the Rialto Bridge and the bell tower of St. Mark's Basilica. He filled his gambling hubs with trendy restaurants and shops, making them luxury destinations for business travelers and tourists alike.
In November 2018, Trump awarded Adelson's wife the highest U.S. civilian honour, the Presidential Medal of Freedom, a move critics assailed as a presidential "thank you" for the couple's financial backing. During the White House ceremony, Trump hailed the Adelsons for protecting "the sacred heritage of the Jewish faith," placed the medal around her neck and kissed her on both cheeks.
"I know that a lot of people think that guys like me succeed by stepping on the broken backs of employees and other people, but they don't understand that we, too, have philosophies and ideals that we adhere to very scrupulously," Adelson said at a Las Vegas event in 2008, according to the New Yorker magazine.