Story of the Year – The protests in St. Martin 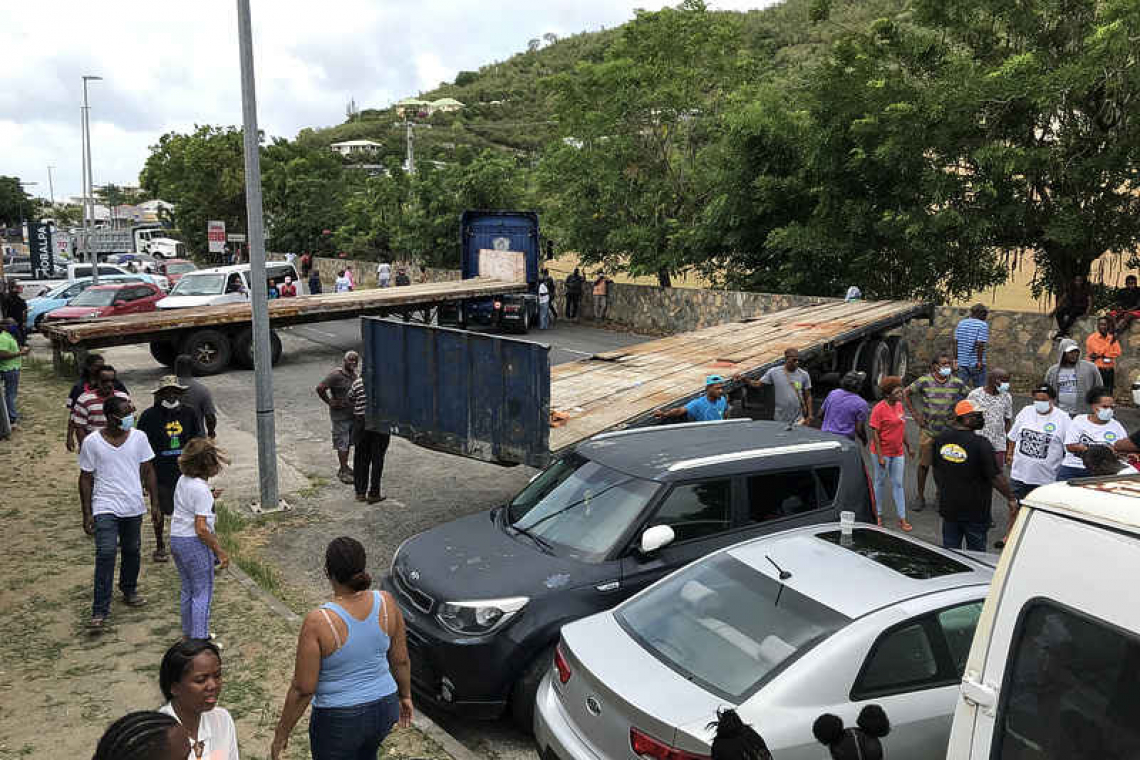 MARIGOT--2021 was a dramatic year for protests and social unrest on the French side, much to the dismay of the Dutch-side neighbours who again had to put up with the inconvenience of blocked roads. Even if grievances of the movements were legitimate, for events to turn awry at the end of the year was unexpected.

Fortunately for a small territory, protests and sporadic violence up to now have been short-lived. Common sense usually prevails knowing that tourism, the one-pillar economy, is at stake and any prolonged strike activity could sound the death knell.

That didn’t happen but strikes and protests didn’t do the island’s image any favours when word got out to the island’s biggest market, North America. Businesses and hotels on the French side also suffered loss of business.

At the height of the troubles in the first week of December, Hotel Hommage in Baie Nettle saw at least 15 bookings cancelled when violence erupted in Sandy Ground and Baie Nettle. Cruise ship companies Royal Caribbean and Celebrity cancelled their bus tours to Orient Beach due to the protests and barricades in French Quarter.

Numerous wrecked vehicles were set alight as well as car tyres and other debris. The Baie Nettle Restaurant Mezza Luna had tables and chairs robbed by vandals to erect and set alight their barricades. Two small supermarkets and a laundry were also vandalised.

Some seven Gendarmes were injured, two seriously, including one who was hit by a bullet that entered his thigh. Commandant of the Gendarmerie Lieutenant Colonel Maxime Wintzer noted later that even when Gendarmes were entitled to retaliate with increased force, it would have been very unwise to seriously injure or kill a protestor and exacerbate an already volatile situation.

What made protests different in St. Martin in 2021 compared to the December 2019 single protest against the natural risk prevention plan PPRN, was that three separate protests occurred simultaneously: the Collectivité strike, the Webster land protest and the protests against mandatory vaccinations and the health pass.

As a result, the various unions and movements all came together as a “collective of collectives” to package all the issues together. This collective included union UNI-T 978, Soualiga United, Soualiga Grass Roots Movement, United People working together for St. Martin (L’Association Union du Peuple Travailleurs Saint-Martinois (UPTSM)), and the health section of union Conféderation Générale des Travailleurs de Guadeloupe (CGTG).

Another movement SXM Resistance formed to protest against the mandatory vaccination requirement and health pass did not join the collectives, preferring instead to focus on their own agenda. SXM Resistance organised two protest marches and held information and exchange meetings for the population.

Meetings took place with Préfet Serge Gouteyron to address all the issues point-by-point with the objective of signing an agreement protocol, still to be signed by the collectives. Initially these meetings did not go well at the Préfecture, with walk-outs and an instance when the préfet made derogatory remarks about the protestors that only increased tension. However, at the last meeting before Christmas, the meetings were back on an even keel, cordial and respectful on both sides.

The Collectivité strike began on July 5, with the union UNI-T 978 presenting some 30 grievances or demands on behalf of Collectivité employees. It ended on October 8 with the signing of a “suspension of conflict” protocol between UNI-T 978 and President Daniel Gibbs.

At the same time, the highly charged Webster family land issue came to the public’s attention when the family disclosed the court ordered their parcel of land in Griselle, Orient Bay, to be auctioned off despite the Websters having title to the land since 1986. Negotiations between the family, the administrator for the Beauperthuy succession, Cadisco that purchased the land and Préfet Gouteyron are ongoing to find a solution.

And by the time President of the Republic Emmanuel Macron had announced mandatory vaccinations against COVID-19 for all health workers and firefighters on July 12, protests began at the Louis-Constant Fleming Hospital. Secretary of the health section of union CGTG, Marceline Dessout, became the face of the protests on behalf of hospital workers.

Lenny Mussington, the unofficial spokesperson for the collectives, said no one from the collectives gave any instructions to the young people to turn violent.

“You didn’t have to because everything was live on social media. The préfet’s remarks and cancellation of meetings was the trigger for the young people to react,” he said. “It’s unfortunate but it’s sometimes only through the language of violent protests that a door opens for negotiation. Guadeloupe was protesting for months, and when the blocking and burning started, that’s when ministers came over from France to negotiate.”

Questioned on why such protests had to occur when the Collectivité and Préfecture constantly publicise employment incentives and training opportunities for the youth, accompanied by the financial means, he replied: “That’s because what is being done is not working. What is on paper does not mean these schemes are being applied concretely to benefit the people, because the suffering is still there. You can have all the beautiful schemes you want on paper, but in practice if they don’t filter down to the lowest levels of people who really need it, then it’s pointless.”

It’s why Mussington wants the préfet to include the collectives as part of a watchdog committee to ensure funding for programmes is monitored; and the training institutions themselves to be controlled and to show results.

For Mussington, the mindset of the State is a real problem, where a common thread to the grievances between State and St. Martin lies in the State imposing its authority and making unilateral decisions to restructure St. Martin without consulting the population.

“The State gets its way because local government is too weak, leaving us collectives to fight for the causes that really matter. It’s a constant confrontation, and we always have to find ways to push back. The State is not interested in empowering us, it only wants to dominate and maintain its interests.”

A good example, he said, is education, where the system works in France but not in St. Martin.

“French is not the mother language for children here: that’s why we want a bilingual approach to education with stable teachers who also understand the culture. With 40 per cent youth unemployment, half of whom are not trained, and only 12 per cent of children going to high school passing the reading test, it’s a cocktail for disaster. This means years down the road there will continue to be inequality of social standing and clashes between the “haves and the have nots.”

“For now, it’s only blocked roads, but if the same situation is not corrected and the State does not change its mindset, it will be much more than blockades in the future,” he warned.