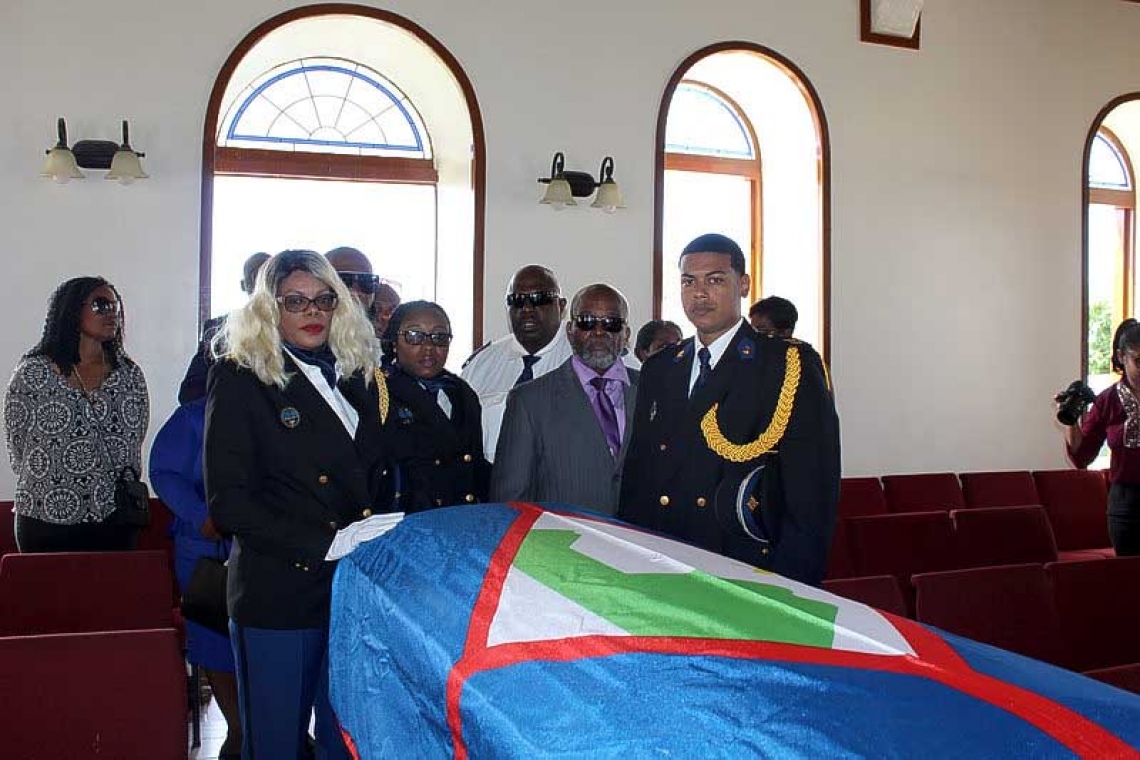 A tribute for Van Putten was carried out by his former colleagues of the Caribbean Netherlands Police Force St. Eustatius and the St. Maarten Police Force.

Van Putten’s casket was draped in the Statia flag to pay tribute to his dedication to the island. He leaves to mourn his 19 children, 47 grandchildren, 45 great-grandchildren, a large extended family, his former colleagues of the Police Force and a multitude of friends too numerous to mention.

The eulogy was given by Van Putten’s son, former Senator/Commissioner and Island Council member Clyde van Putten who spoke fondly of his father’s love for his family and how family always came first.

The service was led by the late Van Putten’s nieces Beryl Fortin-van Putten and Gloria van Putten, and was officiated by Reverend Vincia Celestine.

Van Putten was a highly decorated Statian who received many medals for his service to the island.

Chief Inspector of Basic Police Care St. Eustatius, Robelto Hodge also spoke during the service. He said, “On behalf of Josie Rosales and the Police Corps of the Dutch Caribbean, I would like to extend our sincere condolences to the family and friends of the late van Putten.”

Hodge said Van Putten had been a true friend, a counsellor, an adviser, a confidant, a colleague, a source of information and a mediator.

Van Putten worked with, for and around the police for more than 47 years. He served as the department’s only prison warden during his time with the department.

During the absence of police officers at the station, Van Putten would also take over the telephone service and would attend to those persons seeking police assistance.

He also hoisted and lowered the police station’s flags daily, rain or sunshine. When officers lacked knowledge of proper flag protocols, Van Putten would promptly educate them on the matter, Chief Hodge added.

“Tat was always on the move, he made himself available to the police operation 24/7. He was a very proud man and deservedly so because he performed his duty with professionalism and a sense of pride that is seldom seen in today’s society,” Hodge said.

Van Putten’s frequently-used words were “Never late, never sick,” always available day, evening and night. He often told the officers that he took pride in the fact that he had taken two oaths of office, one as a prison warden and as the “bode” for the island government. He wore with pride the medal he had received from the Queen of the Dutch Kingdom.

Van Putten took pride in his athleticism. Even after he passed the age of 60, persons could see Van Putten running like a young boy from the police station to Fort Oranje to ring the bell. He would ring the bell, rain or shine, 365 days without fail.

“His friendship and willingness to help is what we most remember him by, as he was a mentor to the younger officers who just left the police academy and came to Statia to work. We would depend on Tat to show us the ropes, meaning there were many things we learnt in school, but the life’s lessons he taught us contributed to the growth of many of our officers, including myself,” Hodge said.

“He made sure that the officers understood and learned to appreciate Statia’s culture, and instructed us on how to operate in its culture and respect its traditions.”

Hodge ended by saying that the department had loved Tat like a brother, like a father, a friend; how much they will miss him; and may his soul rest in peace.