SMMC says it expects a surge in local COVID-19 patients 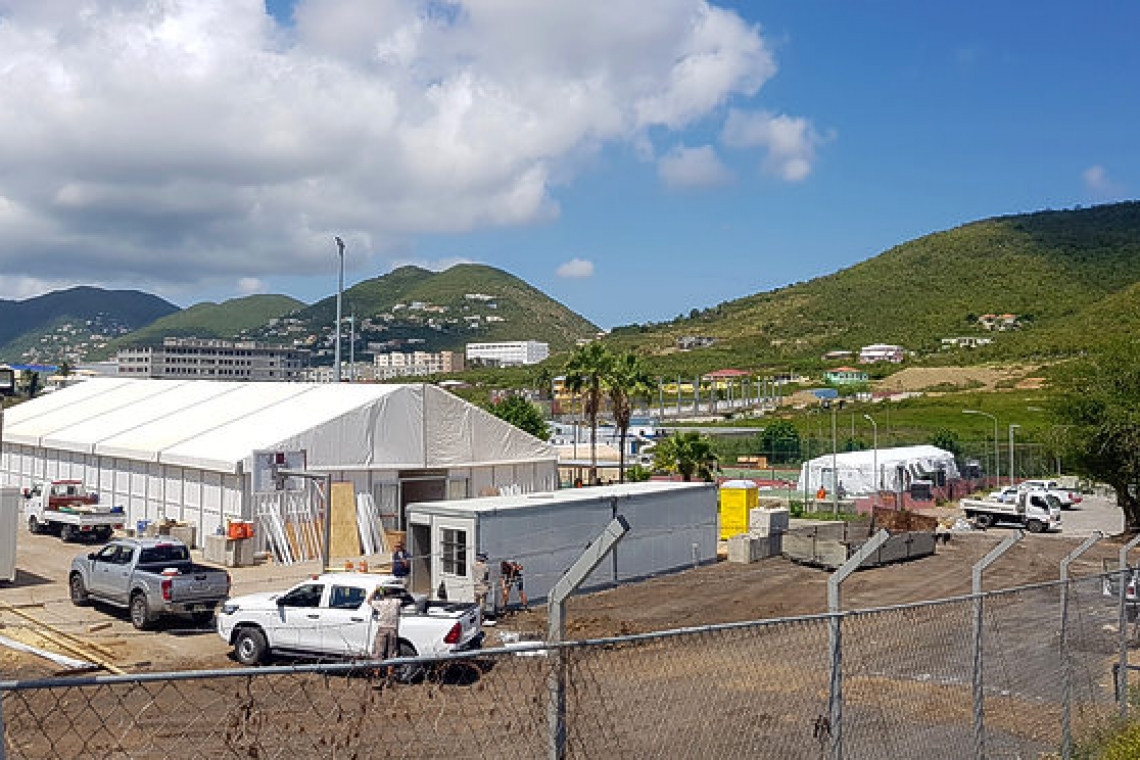 SMMC’s Mobile Medical Pavilion in foreground and the ICU Tent in the background.

CAY HILL--The St. Maarten Medical Center (SMMC) said it is preparing for more suspected or confirmed COVID-19 patients that need to be admitted to the hospital.

“Based on case studies and data analysis from other COVID-19 countries where communal spread has occurred, estimates on the actual number - not to be confused with the reported number - of infected persons in the community can be forecasted based on the mortality rate and the doubling in cases over a specific number of days,” said SMMC in a press release on Tuesday.

As per April 7 SMMC has admitted 12 COVID-19 related patients since the start of the outbreak of which two are currently admitted, in critical condition and being ventilated, while five are deceased and five have been discharged and are in stable condition in strict home isolation.

SMMC said from the admitted COVID-19 related patients to SMMC so far, the conclusion is that patients are predominantly in very poor condition and in most cases suffer from comorbidities (pre-existing health conditions such as hypertension, diabetes, asthma and/or overweight).

Looking at the patient population on St. Maarten where hypertension, diabetes and overweight are common health issues, SMMC expects a surge in the number of (suspected) COVID-19 patients that are in (extremely) poor condition once admitted to SMMC, said the release.

“If a correlation is made using the figures from Collective Prevention Services (CPS) and based on data analysis from other countries, the expected number of COVID-19 admittances and mortality on St. Maarten can be estimated based on the global scientific and societal experiences. SMMC therefore has been taking preventative measures such as establishing more ICU capacity in the past weeks to prepare for the surge in admitted COVID-19 patients it is expecting,” said SMMC.

With the expansion of the Medical/Surgical ward by hermetically sealing off the ward and designating it to the care for acute COVID-19 patients only and the extra Intensive Care Unit (ICU) capacity brought in through the Dutch Government’s support, SMMC has increased its isolation capacity to 14 isolation beds inside of the hospital of which six beds are for ICU care with each having its own ventilator.

The extra ICU capacity that has arrived on St. Maarten on Sunday, April via Dutch military plane transport also includes a special “ICU-tent”. SMMC said this ICU-tent has six beds - each with its own ventilator - and has negative pressure. The ICU-tent will be transformed into an ICU-container (a so-called “Hospitainer”) in the near future, which is more storm resilient, but because of logistical reasons could not get to St. Maarten sooner, so a tent has been erected in the meantime.

“It is important to note that increasing ICU capacity and the number of ventilators alone will only be effective with the help of additional medical (ICU) staff as SMMC does not have the medical staff capacity currently to man the additional ICU beds,” said SMMC. “It takes approx. four medical staff to operate one bed, per day. As such, a medical team consisting of at least 30 additional healthcare professionals has been recruited and is expected to arrive on St. Maarten in the course of this week to help with the much-needed ICU care in the ICU-tent.”

SMMC and he Government of St. Maarten are also working on completing additional medium care capacity in the form of a Mobile Medical Pavilion (MMP), which will also to be used for triage purposes for anyone showing flu-like symptoms. The MMP houses seven double patient rooms and support staff rooms.

The MMP and ICU-tent are both located in the same area - opposite SMMC - at the Raoul Illidge Sports Complex basketball and tennis courts respectively.

SMMC noted that it must be taken into consideration that putting a patient on a ventilator is an extreme and invasive measure. It is a form of life support that takes over the breathing when a patient is unable to breathe on their own. “Ventilators can be lifesaving but they do not fix the problem that led to the patient needing to be put on ventilation in the first place,” said the hospital.

According to the release, the procedure of being put on a ventilator is a very invasive one; the patient is given a sedative, then a paralytic that stops their breathing after which a long plastic tube is inserted through the trachea and vocal cords into the lungs. This allows the ventilator to deliver puffs of highly oxygenated air to the lungs. Once a patient is put on a ventilator, they might have to remain on ventilation for two to four weeks in case of COVID-19.

Unfortunately, preliminary research into the mortality among COVID-19 patients on ventilators found that in the United Kingdom out of 98 patients, just 33 were discharged alive. In Wuhan (China), only 3 out of 22 ventilated patients survived, according to the release.

SMMC urges the public to call their family doctor or the CPS hotline 914 (or 721-542-1122, 721-542-1222), if they have any of the general COVID-19 symptoms (fever, cough, tiredness, shortness of breath) or if persons may have any questions or require additional information regarding COVID-19.