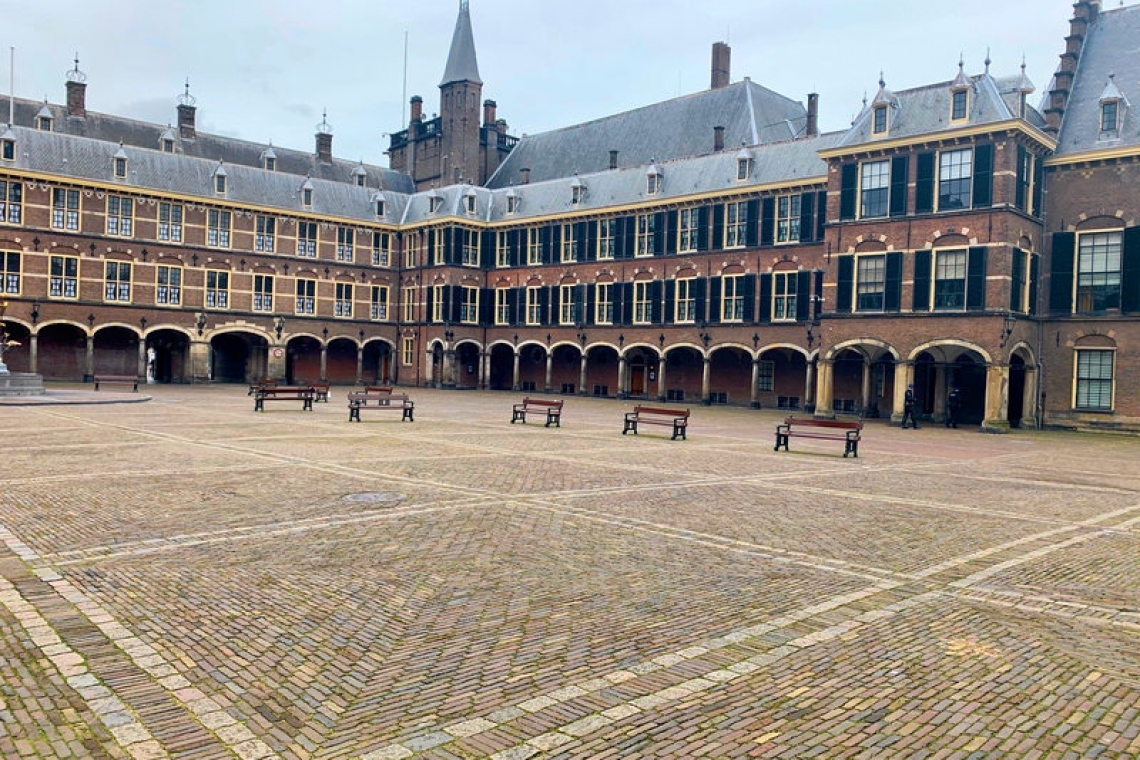 The Binnenhof in The Hague where the First and Second Chambers of the Dutch Parliament meet.

THE HAGUE--The Dutch government on Wednesday released more details about the emergency package for Bonaire, St. Eustatius and Saba so people can keep their jobs as much as possible and to limit the consequences for the islands’ economies.

The Hague is taking “sizable” measures for the coming weeks and months, including financial support for the private sector so businesses can continue to pay their employees, a financial contribution for self-employed people, deferred payment of taxes, and loans for small and medium-size companies.

“The government is totally cognisant of the difficult period that residents and companies of Bonaire, St. Eustatius and Saba are facing. Depending on the developments, the government will not hesitate to take necessary and suitable follow-up measures in case this is needed,” the Dutch government stated in a letter sent to the Second Chamber of the Dutch Parliament on Wednesday.

The (near) ceasing of air traffic and cruise tourism has had and for a while will continue to have great economic impact. “The consequences for the small communities that heavily lean on tourism are enormous,” it was stated in the letter.

Saba was mentioned as an example where many residents depend on the rent income from students of the Saba University School of Medicine, of which it is not sure whether it will re-open in May.

Also, there is increasing concern about the logistical issues of getting goods to the islands. Due to the increasing border restrictions both in the Caribbean part of the Kingdom as well as in the United States and the Netherlands, securing the commercial supply of goods will become a great challenge. The Dutch government will continue to keep a close watch on this aspect.

“Workers, self-employed persons and companies in the Caribbean Netherlands have, just as in the Netherlands, concerns about income to pay bills, to keep people on the payroll or to keep the company afloat. The government considers it of great importance to maintain jobs and to offer support in acute situations that workers, self-employed persons and companies face.”

The direct responsibility that the Netherlands has for the three islands was emphasised. “This letter concentrates on giving content to that responsibility. This does not lessen the fact that the government stays in close touch with the autonomous countries Aruba, Curaçao and St. Maarten and we try to support each other with advice and assistance.”

To ensure a quick process to compensate troubled companies, government has opted for a regulation that comes close to the existing sickness insurance law “Wet Ziekteverzekering BES”. Companies will be able to receive 80 per cent of the maximised daily wage for their employees when there is less work due to the crisis.

Companies have to show a turnover loss of at least 20 per cent to be eligible for compensation. Companies have to indicate the wages of the employees and the size of the work reduction. The regulation also counts for persons with a zero-hours contract.

The compensation will be paid for a maximum of three months with the possibility of an extension of another three months. Under this regulation, companies have to continue paying their employees and as long as the company makes use of this regulation, it may not fire an employee for business and/or economic reasons.

A facility will be available for self-employed persons. This group can receive a maximum compensation of 80 per cent of the legal minimum wage. Another potential group, dismissed employees, can also make use of this facility.

The facility, also the one for companies, has already gone into effect. The requirement of having a 20 per cent minimum loss of turnover will be applied as of March 13, the day Bonaire’s airspace closed.

Entrepreneurs in Bonaire, St. Eustatius and Saba who are running into liquidity problems can seek a temporary tax deferral. These entrepreneurs need to get in touch with the Caribbean Netherlands Tax Office for a request, which will, in principle, be immediately awarded.

The temporary facility under the medium and small entrepreneurs’ regulation BMKR will be open to the Caribbean Netherlands for a year. Financing up to a maximum of US $1.5 million, with an increased guarantee credit, will be admitted from 50 to 75 per cent to soften the financial blow of the COVID-19 virus crisis. This will enable financiers, especially banks, to easily expand credit.

The Dutch government will provide a financial contribution of maximum six million euros to the micro-credit organisation Qredits, which will also offer this support to Caribbean Netherlands entrepreneurs. Entrepreneurs can get a six-month deferral of repayment of their loan and an interest reduction for six months. This facility will last until late May.

The public entities can also take measures regarding the local taxes. To limit the loss of companies in the tourism sector, the Ministry of Home Affairs and Kingdom relations BZK will discuss the possibilities with the public entities and how to fit this in budget-wise.

The Dutch government has opted for a “massive and broad package,” just as it has for the Netherlands. The emergency package will, in principle, be for three months. “Government keeps a close watch on the developments and has continuous contact with the Executive Councils of the public entities, the Acting Government Representative and employers’ and employees’ organisations on the islands.”