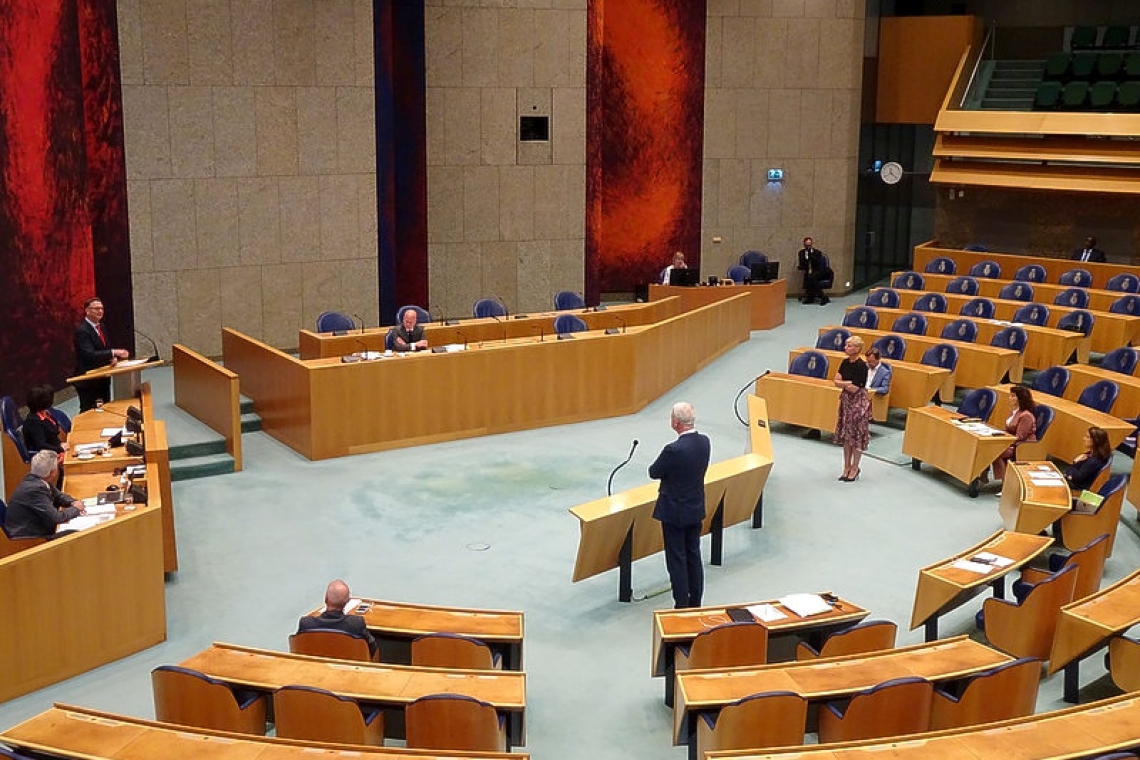 The Second Chamber in session on Wednesday during the debate on the issuing of liquidity support for Aruba, Curaçao and St. Maarten. (Suzanne Koelega photo)

THE HAGUE--The Second Chamber of the Dutch Parliament is in full support of setting conditions to the financial assistance for Aruba, Curaçao and St. Maarten, it became clear during a plenary debate on Wednesday. Above all, Dutch funding should help the large group of needy persons on the islands and certainly not benefit the small group of the rich elite.

“The poor man should not suffer. They need our help in this crisis situation. The broadest shoulders should carry the biggest weight,” said Member of Parliament (MP) Nevin Özütok of the green left party GroenLinks, who pointed out like many of her colleagues in the Second Chamber that the humanitarian urgency was high, and that a swift start of the reforms by the countries was needed to increase resilience and to realise growth.

In that sense, there was full support for the proposal of State Secretary of Home Affairs and Kingdom Relations Raymond Knops to link the second tranche of liquidity support to Aruba, Curaçao and St. Maarten to a number of stringent take-it-or-leave-it conditions aimed at cutting government cost. Next week Tuesday, the Second Chamber will vote on the suppletory budget amendment to facilitate liquidity support for Aruba, Curaçao and St. Maarten.

Asked by MP Ronald van Raak of the Socialist Party (SP) whether St. Maarten had already said yes to the proposal, Knops said that he had received a letter from St. Maarten that morning, but that he didn’t have a chance as yet to read it because he was in the middle of the debate in the Second Chamber about the same issue.

The State Secretary said that he would inform the Second Chamber of St. Maarten’s decision in the second term. However, during the second term he said that in the meantime, St. Maarten had withdrawn its first letter, and that a second letter was coming. By the end of Wednesday’s debate in the Second Chamber, Knops had not received St. Maarten’s second letter. He promised to keep the Parliament informed. Shortly after the debate in the Second Chamber, St. Maarten informed the State Secretary that it completely accepted the conditions. Aruba accepted the conditions last Friday, and Curaçao did so on Tuesday.

The Second Chamber shared the opinion of the State Secretary that it was either a yes or a no. “No buts, no ifs. This is not an invitation to have talks about the liquidity support. It is time for action,” said Van Raak. Knops agreed: “It has to be a straightforward yes. Saying that we have been working on that already doesn’t cut it for me.”

MP Attje Kuiken of the Labour Party PvdA asked the State Secretary about possible legal objections to the conditions, which Curaçao and St. Maarten have indicated was the case. Knops replied that possible objections could always be dealt with at a later stage, but that for the moment, quick decision-taking was needed.

“The conditions are loud and clear,” said MP Antje Diertens of the Democratic Party D66. “We are not open to negotiations. The conditions that have been set to next loans are binding and non-negotiable,” said MP André Bosman of the liberal democratic party VVD.

According to Bosman, the Dutch Caribbean countries have enough economic opportunities. If the earnings are justly divided among the society, there should be prosperity for everyone, but not as long as the elite keeps most for itself and lets the poor suffer.

“There is a lot of money, enough it is evenly divided, but it now ends in the pockets of a small club of old rich families. Things will never work out for the countries if this small club keeps sucking the economy dry for its own benefit,” said Bosman.

MP Machiel de Graaf of the Party for Freedom PVV brought up the term “pack of thieves” which the party has used in debates about the islands in the past years. He said that the stealing by the small elite group, by certain established families took place at the expense of the poorer people.

De Graaf said that if it turned out that the money that went to St. Maarten now in connection with the corona crisis disappeared into the wrong pockets, the monies in the Recovery and Resilience Fund, managed by the World Bank, should be frozen.

“We all know that we shouldn’t really give the countries money, and still we do it. That is because of our Kingdom feeling. But we only give money with the demand that it helps the people who are in need, not the small rich elite group. The conditions that we have set are totally logical, normal. We do that to help the right people, not because we want to play the boss,” said Van Raak.

“We fully support the State Secretary. Considering the experiences within the Kingdom in the past years, we think that the islands also benefit from a straightforward approach, also so improvements can be realised in a short period,” said MP Chris van Dam of the Christian Democrats CDA, who also spoke on behalf of the ChristianUnion.

Van Dam said that it was important to keep having attention for the poverty aspect of the corona crisis. He said it was very good that the Netherlands supported the islands with 16 million euros for food parcels, but what if the money is finished, he asked. He said he was shocked to learn that 45,000 persons on the islands or 15 per cent of the Dutch Caribbean population depend on food aid.

Kuiken asked if the 16 million for humanitarian could not be expanded. She emphasised the aspect of poverty. “It cannot be that in this Kingdom, children are going to bed hungry while we discuss the issuing of loans for the countries.”

Both Van Dam and Van Raak mentioned the importance of supporting the people on the islands. “Our brothers and sisters,” as Van Raak put it. “Our family in the Kingdom,” said Van Dam. “We should do this together as one Kingdom, in solidarity and out of humanity,” said Diertens.