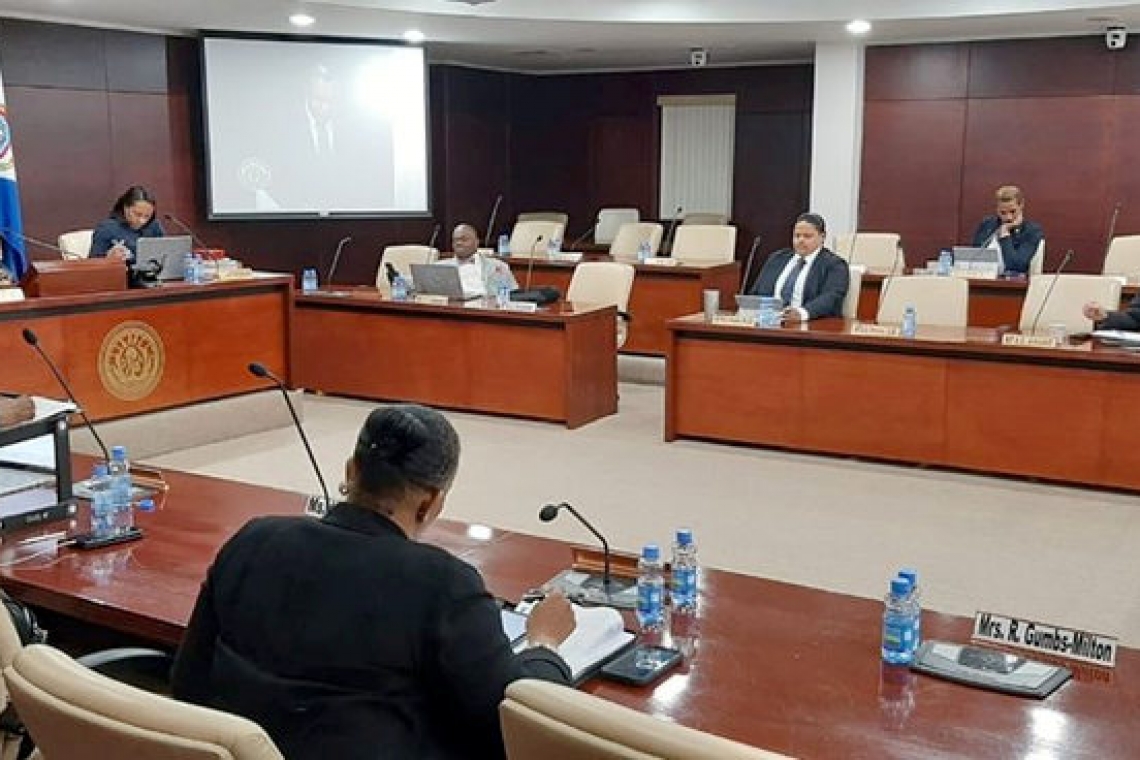 PHILIPSBURG--Members of Parliament (MPs) are likely to vote on amendments to the draft Criminal Procedure Code in a follow-up meeting of Parliament, which would bring the legislation one step closer to becoming a reality.

The passing of the draft Criminal Procedure Code has been highlighted as necessary to move into the fourth round of the mutual evaluations of the Caribbean Financial Action Task Force (CFATF) and to avoid St. Maarten being blacklisted by the CFATF.

In a Parliamentary meeting on March 6, MP Rolando Brison of United People’s (UP) Party said he withdrew the amendment he presented in October 2019, and announced his intention to present another amendment in the follow-up meeting. MP Sarah Wescot-Williams of United Democrats (UD) had previously submitted an amendment in a previous meeting.

Brison said the amendment he is to present will be a joint amendment of UP Party and US Party. If passed, the amendment would return the wording of Articles 122, 261, 282 and 289 to that of the existing Criminal Procedure Code. Additionally, parts of Articles 177 and 289 would be removed.

“This amendment proposes, among other things, to remove the crown witness issue, when every indication we have received [is that it – Ed.] has nothing to do with CFATF compliance. Therefore, let us revert that Article back to its original form … and stop this debate about a crown witness,” said Brison.

Wescot-Williams said she has taken into consideration the reservations of MPs concerning the draft Criminal Procedure Code. Her amendment concerns when the Criminal Procedure Code goes into effect after it is passed by Parliament. She also said the amendment regulates the law’s transition, allowing for separate Articles within the legislation to be put into practice at different times.

In the Parliament meeting on Friday, March 20, Justice Minister Egbert Doran answered questions posed by MPs in the earlier meeting. During that meeting on March 6, a majority of MPs were critical of the draft Criminal Procedure Code, highlighting issues with provisions on crown witnesses, among other things. Only MPs Melissa Gumbs and Rhaeyhon Peterson of Party for Progress (PFP) indicated they were ready to vote on the draft law as presented.

In the March 6 meeting several MPs asked about the consequences of being blacklisted. “In short, this action could result in hardship for everyone in St. Maarten due to the fact that St. Maarten is an import economy and a one pillar economy … heavily reliant on tourism,” said Doran.

MP Rodolphe Samuel of National Alliance (NA) asked when the CFATF recommendations had been fused into the draft Criminal Procedure Code. This was done in October 2015, according to Doran.

“A crown witness is a suspect or convict who is willing to testify in a criminal case against another suspect in exchange for a promise of the Public Prosecutor,” said Doran in response to Samuel’s request for a definition of the term. He said the definition and rules surrounding crown witnesses can be found in Article 261 of the draft Criminal Procedure Code.

Doran said the Prosecutor and the Judge of Instruction determines who can become a crown witness. He also said the funds for crown witnesses come from St. Maarten’s budget.

Second round of questions

In the second round of questions, many MPs reiterated their discontent with the draft Criminal Procedure Code’s current form.

MP Claudius Buncamper of United St. Maarten Party (US Party) said passing the draft Criminal Procedure Code will not save St. Maarten from being blacklisted. However, it “may bring us a step closer to compliance,” said Buncamper.

Buncamper referred to Peterson’s remarks on crown witnesses, which were said in the meeting on March 6. “If you do the crime, you must be able to do the time. We are not here to protect the criminals but the people of St. Maarten. And we must use the small fish to catch the big fish,” Peterson said in that meeting.

Buncamper said he disagreed with the part of that statement. “We took an oath to represent all the people of this country, not just some. Why did we allow the convicted criminals in jail to vote if we are not going to stand by them and support them?” he asked.

He also asked how crown witnesses are dealt with in the Netherlands, specifically if they are given immunity from prosecution and whether assets seized during an investigation are returned to crown witnesses.

“In various Articles we realise the Judges of Instruction are being replaced by the Prosecutors. This takes away the checks and balances [and] a proper judicial review,” said Buncamper.

He said he cannot support the draft Criminal Procedure Code as presented as it gives too much power to the Prosecutor’s Office. “Let judging be to the Judges and prosecution to the Prosecutors. Let us not start tipping the scales of lady justice.”

MP Omar Ottley of UP Party said he consulted with “experts” regarding the draft Criminal Procedure Code, who “all said this has nothing to do with the CFATF.” Ottley did not specify the persons he consulted with or why they are considered “experts.”

“The Prosecutor has a free-for-all and this needs to be stopped. Families go through five, six, seven years of prosecution only to be vindicated,” said Ottley.

Like Buncamper, Ottley said he agrees with part of Peterson’s remarks. “If you can’t do the crime, don’t do the time. While I may agree, my fight is for those who are doing the time that did not do the crime,” he said.

MP Christophe Emmanuel of NA said the draft Criminal Procedure Code is not so much about preventing the country from being blacklisted as it is “something a different entity wants approved to benefit them and they slap it on to [the draft Criminal Procedure Code] knowing it is something the country is obligated to approve.” He said it “boils down to being blackmailed.”

“I see that my quote has stuck in several of my colleagues’ heads, so I am pleased that it had the effect that it did … The people of St. Maarten should also know that this law proposes to regulate the already existing crown witness procedure. Regulate, as in set the rules for its handling.

“Currently, it seems as if there is a ‘free-for-all’, as any Judge can decide how a crown witness is handled from one case to the next. Why would we be against bringing this concept under control, if the sentiment is that the Prosecutor, at this moment, can ‘do what they want?’” emphasised Peterson in his turn to speak.

He also said St. Maarten will face economic difficulties because of the coronavirus COVID-19 pandemic and it would be “irresponsible to subject our country to the risk of blacklisting that comes with not passing the law.”

Peterson said Parliament can pass the law now and amend it later if MPs so desire. “At no point is a gun being held to our heads, but it seems as if we are doing this to ourselves,” he said. He concluded by reiterating PFP’s wish to vote on the draft Criminal Procedure Code.

Brison asked whether the CFATF plenary session, which is scheduled for May, will still take place considering the coronavirus pandemic. Doran confirmed that the meeting has been postponed indefinitely.

Near the end of the meeting, a member of Doran’s support staff said the amendments need “to be looked at more diligently” because removing Articles from the draft Criminal Procedure Code could have detrimental effects for the law.

“It is a system. It is not a provision that stands by itself. Other Articles in this draft refers to Article 177… If these provisions have to be taken out of the draft, then we also have to amend other provisions. That is why the amendments as proposed should be tweaked,” he said referring to crown witnesses.

Parliament First Vice Chair William Marlin adjourned the meeting until a later date so amendment presenters can “synchronise with government.” Doran is also to answer questions from MPs.

MPs are likely to vote on these amendments in the next meeting.