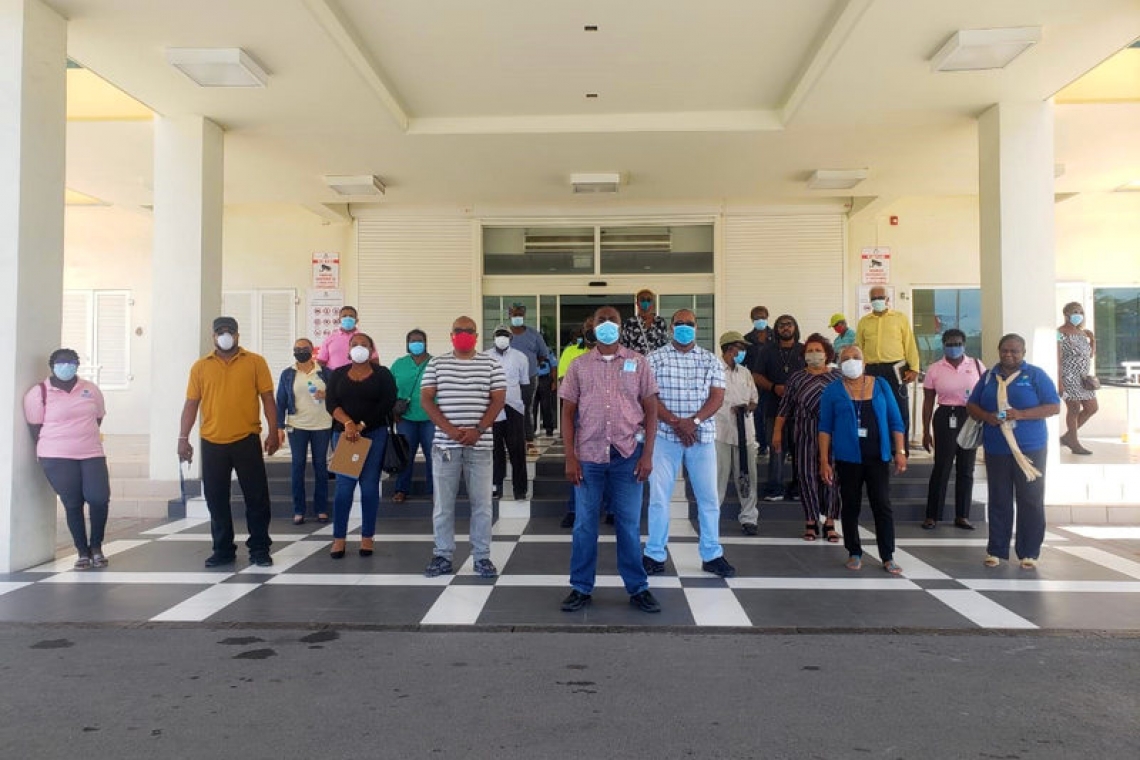 Union leaders and members stand in unified stance at the Government Building as they await a response from the Council of Ministers on Friday morning.

PHILIPSBURG--The unified labour unions of both the private and public sectors called for a meeting with the Council of Ministers (COM) on Friday, May 22 to obtain clarity and information on the cost-cutting measures demanded by the Netherlands as a condition for providing liquidity support to Sint Maarten.

The unions collectively submitted a letter addressed to Prime Minister and Minister of General Affairs Silveria Jacobs, Minister of Finance Ardwell Irion and Minister of Public Health, Social Development and Labour Richard Panneflek along with their request for the meeting.

The letter said, “The unified unions representing the workers in the private and public sectors, namely ABVO St. Maarten, NAPB (Police union St. Maarten), Windward Islands Teachers Union (WITU), Windward Islands Civil Servants’ Union/Private Sector Union (WICSU/PSU), Windward Islands Federation of Labour (WIFOL), St. Maarten Communications Union (SMCU), Windward Islands Health Care Union and Associates (WIHCUA) came to a unanimous decision in a meeting held on Wednesday, May 20 to approach you both to respectfully demand clarity and request information on negotiated cost-cutting measures with the government of the Kingdom of the Netherlands with regard to conditions to acquire a zero-per-cent interest loan for COVID-19 financial support.”

The labour unions representing civil servants sat in a virtual meeting on Thursday, May 7, with the COM where they were presented with four cost-cutting measures that would affect civil servants. This meeting was followed by a meeting of the Committee of Civil Servants Unions (CCSU) on Wednesday, May 13, where a request was put forward to the unions via the CCSU to come up with proposals on those cost-cutting measures.

The unions presented their proposed measures to the CCSU on May 14, after two virtual meetings held with members, and CCSU confirmed submitting these to the COM.

“We have followed the meetings in Parliament and the motion adopted on Wednesday morning 1:00am. To date we haven’t heard from the COM on the approval of our proposals and how these would be incorporated and forwarded to The Hague to be able to obtain the financial aid (loan or money grant),” the letter stated.

“As unions we can’t take lightly that decisions will be taken that would infringe on the acquired rights and benefits of the workers in the private and public sectors. Based on the different International Labour Organization (ILO) conventions, our unions can’t tolerate a violation of our human and trade unions rights. This COVID-19 pandemic must not be used as an excuse to cut salaries and benefits from the workers in general and our members in particular,” the letter stated.

The unions said that, as representatives of public service workers, they strongly and unitedly feel that any such conditions are discrimination and violations of their human and trade union rights and the ILO conventions 87, 151 and 154.

The letter further states that, therefore, the Kingdom government and the St. Maarten government should refrain from any interference which would restrict or impede the lawful exercise thereof.

According to the unions, the Kingdom of the Netherlands was forewarned on April 15 in a letter of independent United Nations expert on COVID-19 and Human Rights Juan Pablo Bohoslavsky to not use the lack of financial resources argument to implement cost-cutting regressive income measures on workers.

The unions said that they are therefore not accepting this crisis or pandemic to be used as an argument to accept new ways of cutting wages, other social rights and benefits from jobs.

“In St. Maarten many front-liners, especially police officers, teachers and other civil servants, have suffered for 10 years the infringement of unfavourable working conditions, not being placed in the right function and right salary scales, no ‘equal work for equal pay’ to provide a decent living for workers and their dependents,” stated the letter.

The unions said that private- and public-sector workers are rebuilding the country while still trying to rebuild their lives after the impact of the two major Hurricanes Irma and Maria in 2017.

“Cost-cutting measures imposed unilaterally to be applied to public servants and private sector workers in the three Caribbean countries (St. Maarten, Curaçao and Aruba) in the Kingdom constitutes an act of racial discrimination and apartheid,” the letter stated. “These cost-cutting measures are contrary to commitments the Kingdom made by signing and ratifying international human rights treaties.”

The unions explained that COVID-19 is a worldwide pandemic and the Sendai Framework for Disaster Risk Reduction recognising and respecting democratic decisions of the United Nations General Assembly places the State (the Kingdom) in the primary role in reducing disaster risk, but also stipulates the principle of protection of persons and their assets, while promoting and protecting all human rights including the right to development.

“We are in addition to this almost at the beginning of a next hurricane season,” they added.

In resolution, the unions said, “The unified unions on behalf of their members stand in solidarity and firm that their members are in need of every penny they work hard for to take care of themselves and their families.