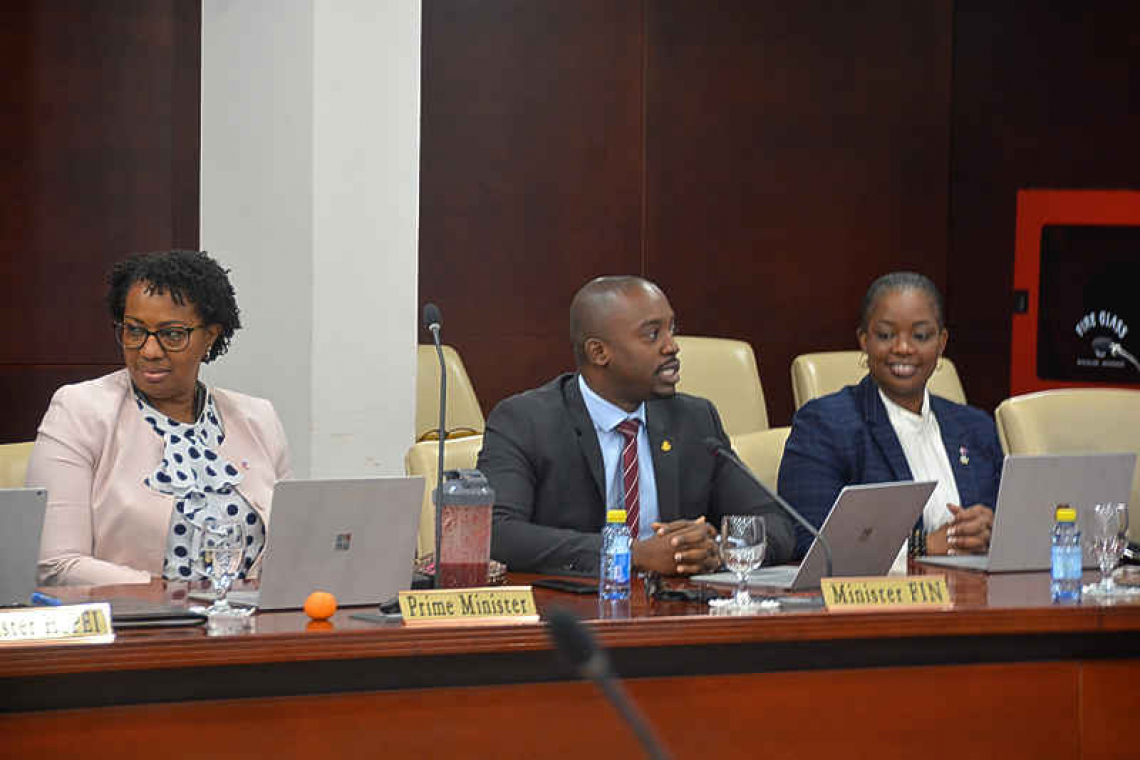 PHILIPSBURG--“We recognise that the 2021 budget needs much improvement,” Finance Minister Ardwell Irion said on Thursday as he presented the NAf. 613 million draft budget to Members of Parliament (MPs) during a meeting of the Central Committee.

The meeting started with Irion giving an overview of the budget and of his ministry for this year. MPs were then allowed to ask questions. Several other ministers then provided an overview of the budgets for their respective ministries followed by questions from MPs. The meeting was adjourned late last night and will continue at 10:00am today, Friday.

Irion told MPs that the draft 2021 budget is based on the approved budget amendment of 2020. The revenue was calculated based on the realised figures from 2020 adjusted with the International Monetary Fund (IMF) projections. IMF forecasts indicate a decrease in gross domestic product (GDP) of more than 25 per cent in the first three quarters and recovery starting in the fourth quarter.

The stimulus programme, he said, is budgeted for nine months (until the start of the new high season). However, the execution is very much dependent on liquidity (support). The draft budget also includes additional expenses that are the result of the COVID-19 pandemic.

Also, personnel cost is adjusted as follows: reduction of 25 per cent for the members of parliament, ministers; reduction of 12.5 per cent for civil servants and employees of subsidised institutions and government entities such as foundations, schools and non-governmental organisations (NGOs).

In elaborating on the financial consequences of the country packages that were taken up in the budget, he said the pension legislation was approved and the changes were implemented as of July 1, 2020. This led to a substantial deficit in the 2021 budget, and as such authorities are unable to comply with Article 15 of the Financial Supervision Act RFT. As a result, exemption from this article was requested and granted by the Kingdom Council of Ministers (RMR) based on Article 25(1) of the RFT.

“We recognise that the 2021 budget needs much improvement, and the government is determined to make much-needed improvements to the 2022 budget and further automate the budgeting process to make it more effective,” Irion said. “The extent to which gains remain primarily dependent on the availability of funding for priority projects at the Ministry of Finance, but these improvement plans are part of the country package within reach of St. Maarten.”

He said strengthening of financial supervision is part of the country package which includes the implementation of proper financial management and tax reforms. The backlog was reduced in 2020 and the financial statements for 2017, 2018 and 2019 are drafted and proceeded. New vacancies are taken up in the personnel cost as well.

“When you exclude the cost for new vacancies and take into account the freezing of increments, reduction of vacation days and the use of unpaid vacation allowance, the 12.5 per cent is incorporated.”

Housing cost is currently NAf. 1.78 million per year. The financing cost for the new building will be NAf. 150,000 per year (this investment will be recuperated within 10 years).

Based on the IMF projections the country expects four per cent GDP growth in 2021 which will result in a slight increase in revenues, Irion said. “The projection of our GDP according to the IMF shows that our budget will balance again in 2024/2025. This means another two years of deficits are projected.”

He explained that the budget post “unforeseen” has an amount of five million budgeted. These funds include a provision awaiting the decision by the constitutional court on the National Ordinance pertaining to the adjustments related to the personnel cost.

Personnel cost has decreased from budget 2020 due to a number of factors, but has increased in relation to realised figures of 2020. The increase is in direct relation to critical vacancies for a number of ministries in association with the personnel needed for the implementation of the country package. Adjusted personnel cost also includes 25 per cent political authorities, 12.5 per cent civil servants and employees of subsidised institutions, other government entities, he said.

The increase in material cost, goods and services is due to an additional NAf. 4 million for expenditures consisting of improvements in financial management and the tax authorities, one million for courses and training in justice, bus transportation and various projects under the Ministry of Education for 3.4 million, amongst others.

A number of cost-cutting measures were immediately implemented in 2020, including the switch to fuel-cards whereby in real time government can analyse and adjust fuel usage per ministry. The switch from post-paid to prepaid was also introduced whereby phones are topped up on a monthly basis, which is determined by function. This has allowed for better management of phone usage, Irion explained.

With the completion of the Bureau Telecommunications and Post (BTP) building in its final stages and moving of various satellite departments into the BTP building, the government expects to save, on a monthly basis, around US $25,000. “The ministry of Finance has engaged in conversation with several ministries on how we can structurally reduce the cost of doing business, which is beginning to materialise and should be reflected in future budgets,” Irion said.