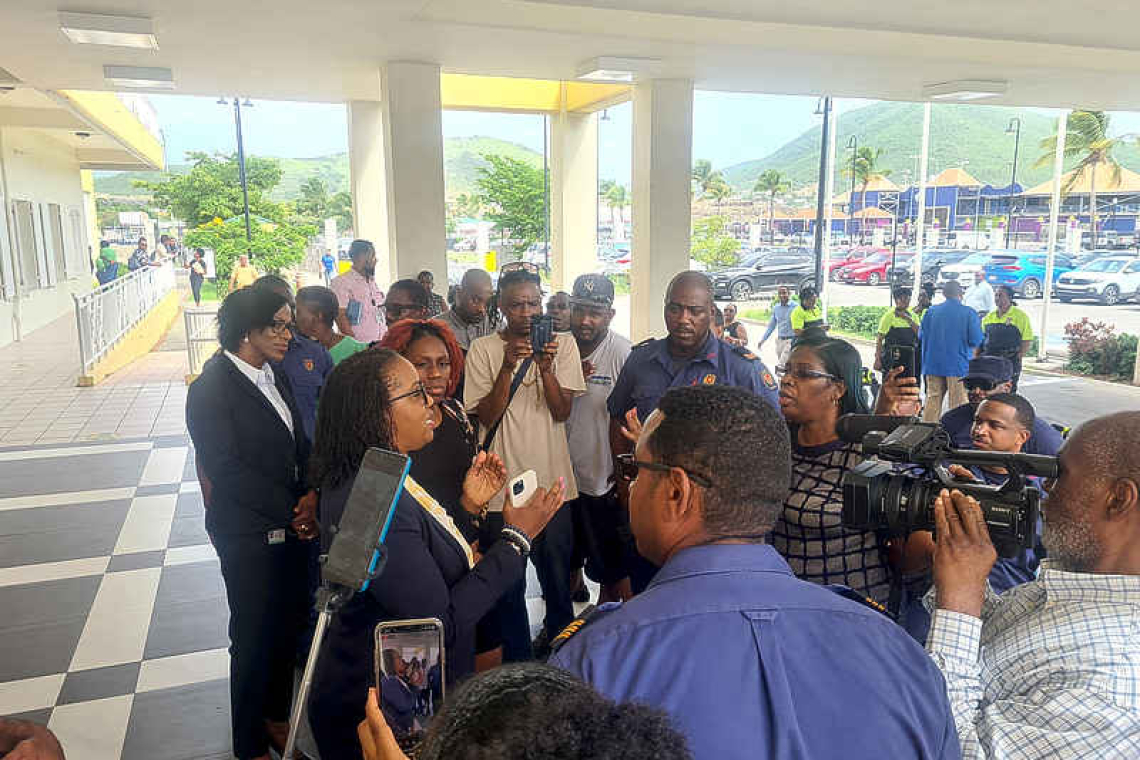 Firefighters stood outside the Government Administration Building Thursday morning, horns and sirens blazing, after showing up for a meeting with Prime Minister and Minister of General Affairs Silveria Jacobs which was not honoured.

PHILIPSBURG--Firefighters stood outside the Government Administration Building Thursday morning, horns and sirens blazing, after showing up for a meeting with Prime Minister and Minister of General Affairs Silveria Jacobs which was not honoured.

According to the union, the meeting with Jacobs, union and members was set to take place at 8:30 on Thursday morning. The union, on behalf of its members, requested for the time to be changed to 9:00am, as the firefighters would still be busy with changing of shifts at 8:30am.

On Wednesday evening, the union received a response in which they were informed that the prime minister could not meet at that time as she had another meeting scheduled at 9:00am.

The Daily Herald understands that, due to the time at which the email was sent, many of the firefighters were unaware of its content and therefore showed up for the meeting.

The firefighters said they were left outside waiting, with no one from the minister’s cabinet coming out to address them. After about an hour, at 10:00am they started blazing the horn and sirens of the fire truck parked at the entrance.

They were adamant to have some sort of dialogue with the minister. Soon after, persons – staff and visitors – could be seen exiting the building and gathering outside to witness what was happening.

The firefighters maintained a stance in unity, lining up in their fire suits along the fire truck as they patiently waited for a response. This continued for another 30 minutes, after which the prime minister joined by members of her cabinet came out to address the union and its members at the entrance.

After some discussion, it was settled that they will get to sit with the prime minister today, Friday, at 1:00pm. Until then the firefighters remain on a go-slow.

“The matter, as it pertains to the firefighters, is a very serious one, and highly deserving of our attention. These men and women are part of our first responders, they put their lives on the line for us every time they are called to duty. Their voices do matter,” said Prime Minister Jacobs in a press release issued late Thursday evening.

“It is unfortunate that we were unable to meet sooner during the week, as I was travelling, but just as I have been handling the processing of the advices for that department, so am I dedicated to ensuring we find solutions to realise the needed equipment, uniforms and other pending gear which has been delayed due to unforeseen circumstances.

“I think they are not forgotten, and I aim to keep my meeting with them to hear them on what needs to be spoken. I have always been open to hear from and dialogue with them and have cooperated with the request made via the union representative.

“There was a list of concerns, I gathered answers from the management and responded, and have always been open to meet with them to hear them out further and give feedback as to the status of their legitimate concerns raised. There is also a need to hear from management and include them in the meeting to reach a proper conclusion on the way forward.”