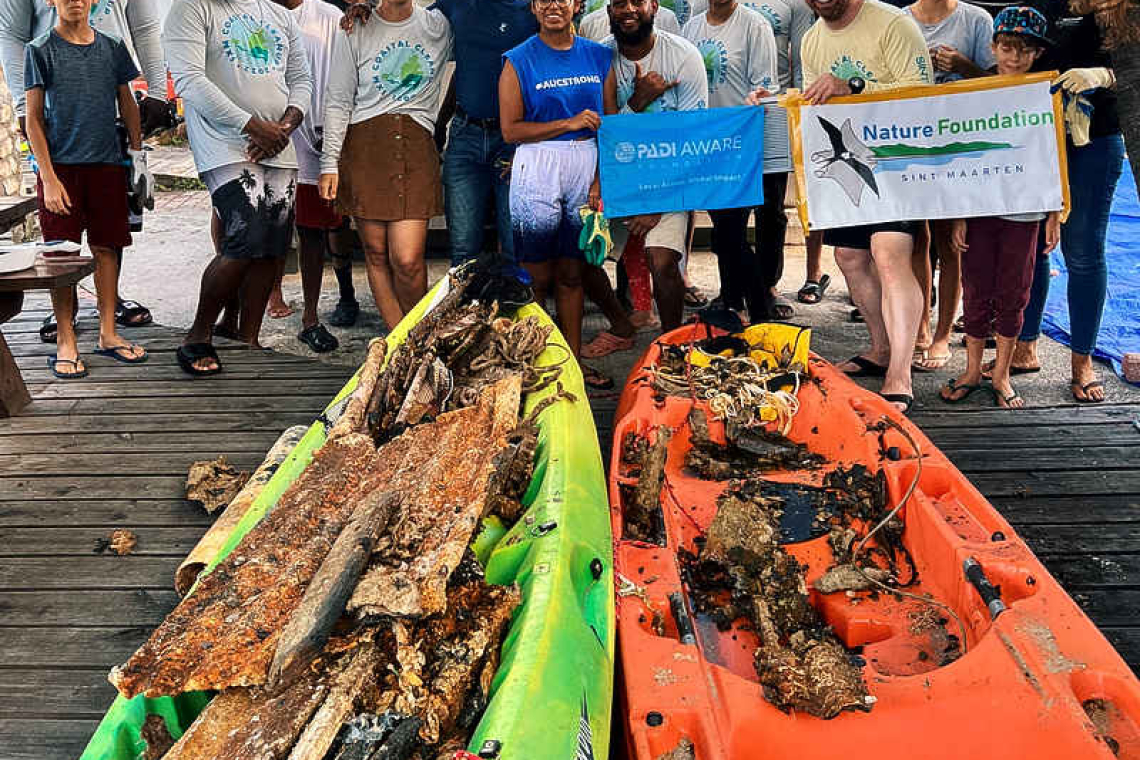 Three kayaks were filled with 458 pounds of marine debris and towed back for logging and proper disposal.

COLE BAY--A trained team of St. Maarten scuba divers went out for their second underwater clean-up of the year in an aim to reduce the amount of remaining Hurricane Irma debris still littering the island’s underwater coastline, on Saturday, November 19. 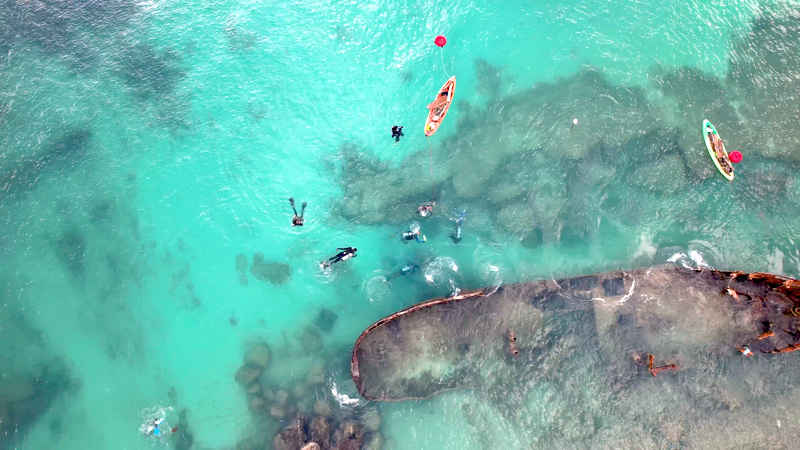 The participating dive boats each had a team of divers collecting debris from Simpson Bay where there is still a lot of roofing and other debris from Hurricane Irma.

As part of the SXM Coastal Clean-Up Project, 12 participants received scuba dive training during the summer months to safely search and recover small to medium-sized debris that remains underwater. The extensive training was finalized in October with the Professional Association of Diving Instructors (PADI) Divers Against Debris course, after which they were able to apply their skills and start removing the debris.

The participants, along with additional volunteers, were taken out by boats of dive schools SXM Divers and Dive Adventures, as well as The Scuba Shop.

The debris was brought to The Scuba Shop where the participants sort, weigh and log the debris before disposal.

The first Coastal Clean-Up of 2022 collected an impressive 613 pounds of debris from the Simpson Bay coastline, which consisted of PVC piping, roofing and other smaller hurricane debris items, as well as large amounts of single use plastics and everyday littering. In the second clean-up the team collected 458 pounds of the same kind of debris, in the exact same spot, just a few weeks later.

On November 19, some participants also volunteered in another clean-up held by American University of the Caribbean (AUC) School of Medicine, which resulted in another 424 pounds of collected debris from the same location.

“The number of debris that we keep collecting in a single, hour-long dive is sadly impressive” said Kim Frye of The Scuba Shop. “Due to the coastal currents the corner of Simpson Bay is a collection point, especially for the lighter plastics that in other places along our coastline float out to sea before we are able to remove them. In addition, every time we have heavy weather, the sand is moved over the seafloor and more debris is exposed in an area already ‘cleaned.’ The job seems endless, but I hope someday that we come back empty-handed from an underwater clean-up event.”

Having tied this project in with data collection programme PADI Aware Dive Against Debris and the European Union (EU) In-No-Plastics databases, Frye said, “We have collected data on our findings in the past two clean-ups, and can safely say that there is still a lot of roofing and PVC piping left from Hurricane Irma on our shores. This poses a huge risk during future storm activity, as pieces may get thrown onto shore or pushed into important marine environments with strong wave activity.

Frye said that the good news is that a decrease in the number of collected plastic bags was noted, which means that the site is becoming significantly cleaner. “Hopefully, this shows that our community members and visitors are reducing the amount of single-use plastic that is allowed to enter our environment.”

Head of Resilience for Community Resources (R4CR) Steve Duzanson said, “It is heart-warming to see these young adults engaging in environmental activities. Each and every project in this programme is so quite different from one another, whilst all still with the same aim to build a stronger and more resilient St. Maarten. This particular project does so by training young adults to become more aware of our island’s environment, and at the same time be prepared for future hurricanes to come. This project is a fantastic contribution to the World Bank Recovery Programme.”

Kidz at Sea wished to extend a special thanks to participating dive companies Dive Adventures, Ocean Explorers, SXM Divers and The Scuba Shop, St. Maarten Nature Foundation, as well as to the dedicated dive instructors and volunteers who have been a very important part in making this project happen.