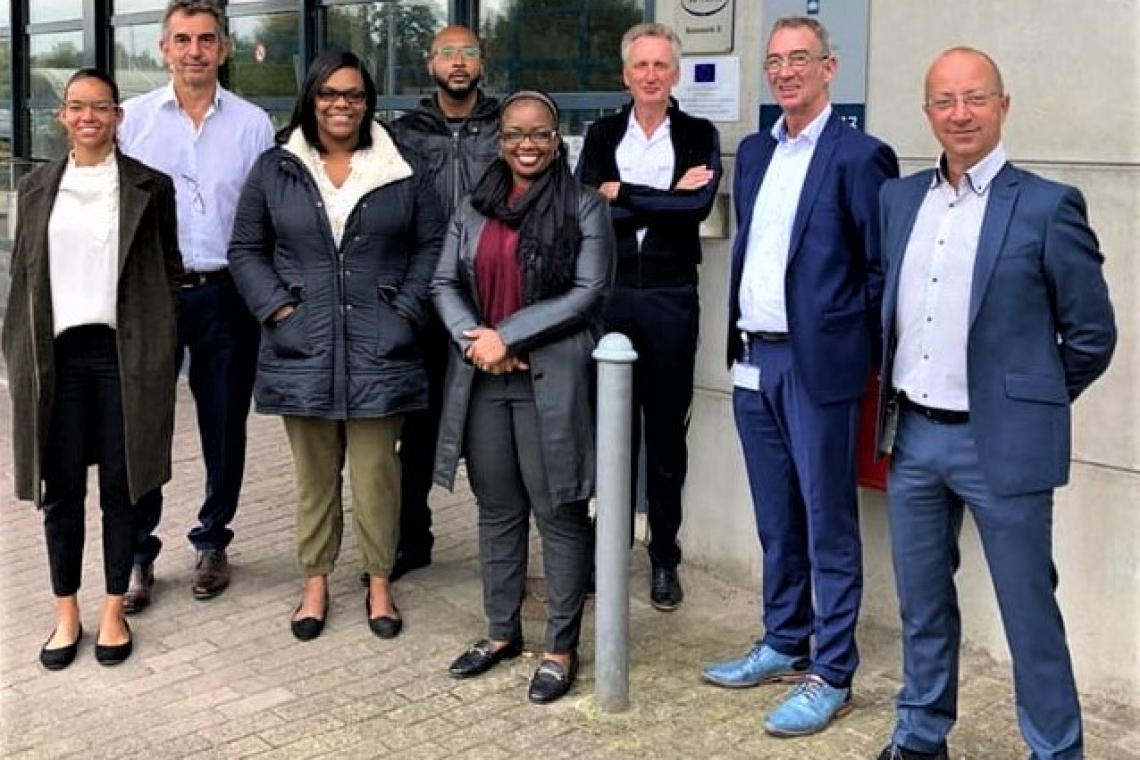 Minister Richardson met in Almelo with prison director Ton Golstein (second from the right) and his staff.

PHILIPSBURG--With Dutch support, St. Maarten intends to replace the Pointe Blanche prison that is comparable to the penitentiary institution in Almelo in the Netherlands, said Minister of Justice Anna Richardson.

Richardson visited the prison in Almelo, which has a maximum capacity of 190 detainees, on Tuesday. On the same day, Richardson also toured the Penitentiary Psychiatric Centre (PPC) section in Zwolle. Forensic care, which is provided in the PPC Zwolle, will also be necessary in St. Maarten’s new prison facility, Richardson said.

The St. Maarten government intends to have a new prison built in accordance with the latest standards. The Ministry of Justice will apply policy reforms to address inmate rehabilitation, Richardson said.

The penitentiary in Almelo was the first prison Richardson and her staff visited. They were welcomed by the institution’s director Ton Golstein. The institution in Almelo was selected as the prison to be visited due to its scale and size. “It is one of the smaller prisons in the Netherlands that can serve as an example to St. Maarten and from which we can learn a lot due to its comparable capacity,” Richardson said.

Golstein formed part of the Custodial Institutions Agency DJI group that came to St. Maarten to support the prison after Hurricane Irma in 2017. Before the year ended, the DJI group made a thorough analysis of the Pointe Blanche prison and House of Detention and produced a report that serves as the plan of approach to improve the prison today, Richardson explained. “Golstein and his colleagues are very familiar with the situation in St. Maarten. This allowed for meaningful dialogue and suggestions.”

Golstein introduced Richardson and her staff to the Extra Care Facility in the prison. “Such a department, specifically for vulnerable detainees, does not exist in St. Maarten,” said Golstein, who stressed that aftercare is crucial to prevent former inmates from falling back into a life of crime.

“We showed Minister Richardson our House of Recovery, where detainees from the region spend the final stage of their detention in a less secure setting and receive extra care and attention so that they can reintegrate and become productive members of society.”

Richardson was also given a tour of a large production facility called The Factory, which offers inmates as well as persons with intellectual disabilities an environment in which to work and earn money. The Factory is made possible in cooperation with stakeholders from the local business community.

Richardson visited the PPC section in the penitentiary in Zwolle in the afternoon. In this facility highly intensive care is provided in a secure setting to inmates with serious mental health and psychiatric disorders. The prison in Zwolle offers space to 350 inmates, including 146 spaces in the PPC section.

“In addition to our establishment, the prisons in Haaglanden, Vught and Zaanstad also have such a PPC facility,” said deputy branch director Marieke Verhoeff. Staff working at this PPC particularly have experience with the Dutch Caribbean and establishing a forensic care facility from the ground up.

Richardson aims to have such expertise applied in St. Maarten and to establish a similar, much-needed forensic care section for mentally challenged inmates. “Only then can they receive adequate care needed to treat and stabilise their condition,” Richardson said.