Airport going into hibernation, will use reserves to bridge cash shortfall 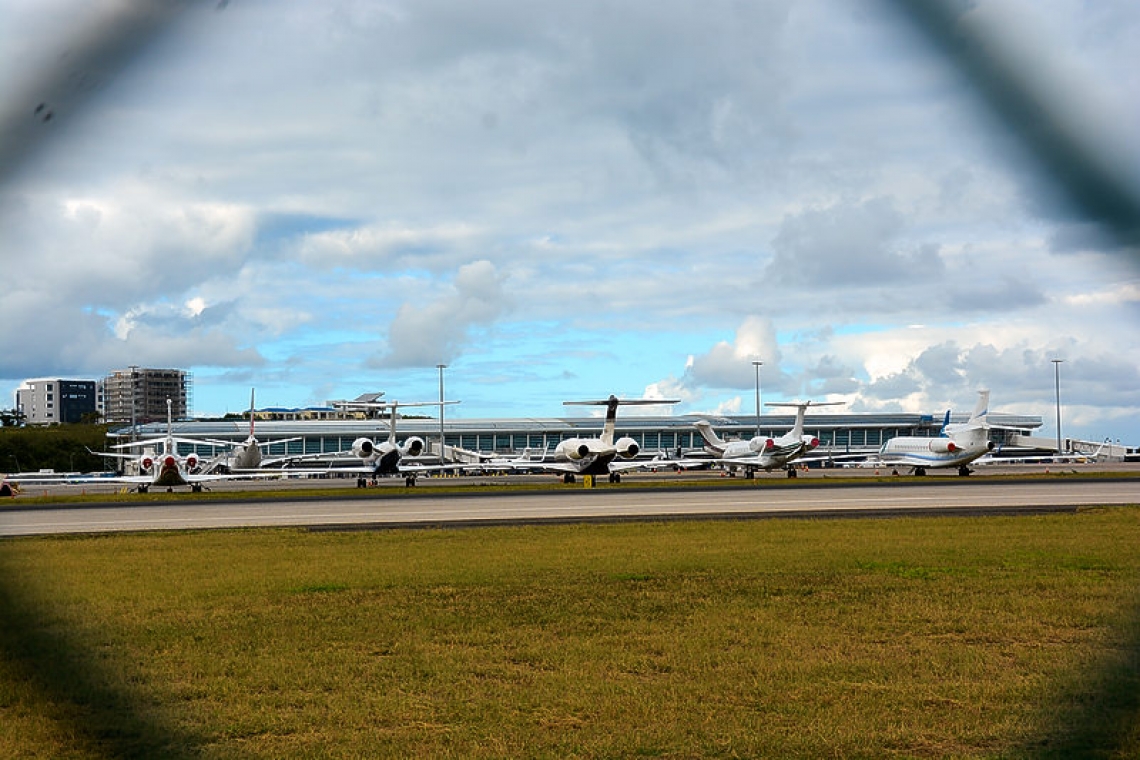 PHILIPSBURG--Princess Juliana International Airport operating company PJIAE officials told Members of Parliament (MPs) on Wednesday that the airport is shutting down to drastically slash expenses in response to the coronavirus COVID-19 crisis. However, the officials said the airport has enough funds available to see it through the end of the year and the reconstruction of the terminal building is still on target.

These statements were given in an urgent virtual public meeting on Wednesday afternoon that discussed the financial situation of Princess Juliana International Airport (PJIA), the funding for the reconstruction of the facility and the resignation of the airport’s chief financial officer (CFO).

According to PJIA chief executive officer (CEO) Brian Mingo, this year was projected to bring the airport back to 85 per cent of its pre-Hurricane Irma passenger numbers. However, with the worldwide spread of coronavirus COVID-19, the airport initiated its pandemic plan, which includes drastic trimming of cost and bridging the crisis with its available reserves.

Mingo said the airport will go into a “hibernation period” because of the crisis, which has put an almost complete standstill to air travel. The terminal building will be secured and closed, with operations moving to the smaller fixed-base operator (FBO) facility. During this period, only cargo, medical and relief flights would be possible, said PJIAE Financial Advisor Leo van der Meiden.

The airport’s cash liquidity will be able to carry the company into the third quarter, while liquidity support from the World Bank-administered St. Maarten Trust Fund will cover the airport’s expenses until the end of the year, he said.

The preparation for the airport’s reconstruction will continue despite the shutdown, said Van der Meiden. He said the conditions for the World Bank-administered grant and the European Investment Bank (EIB) loan have been fulfilled, but the airport is waiting on a letter of effectiveness from those financial institutions for the funds to be released. When the letter is issued, approximately $62 million in insurance proceeds held in escrow by the bondholders will be released.

According to PJIAE official Mirto Breell, the timeline for the terminal’s reconstruction is still on target, with the departure area scheduled to be completed in December 2021 and the total project ending around July 2022.

Breell said the tender process for these works will start in August 2020. The projects will be awarded in December 2020 with the first work to begin in January 2021.

Breell played a virtual walkthrough of the reconstructed terminal building for MPs. The new terminal will be nearly the same configuration as the old one, but will feature a stronger roof; new floor patterns, counter designs and elevators; more escalators, electronic border control systems, check-in kiosks and bag drop-off points; and larger flight information display screens.

In the first round of questions, Buncamper asked how much liquidity the airport has. He also asked whether the airport will be able to tap into government’s economic stimulus package.

He questioned whether airport employees will be put on mandatory vacation when the airport fully shuts down, or will be offered leave with pay. “How many employees are directly affected by the coronavirus crisis? How many subcontractors?” Buncamper asked.

Focussing on St. Maarten’s national carrier Windward Islands Airways International Winair, Buncamper asked whether any provisions have been considered by the airport to assist the airline. He mentioned lowering and eliminating landing, air traffic control (ATC) and parking fees. He asked whether any special terminal facilities have been made available for Winair in the reconstructed terminal building.

Emmanuel questioned the purpose of a work visit by Mingo and other airport representatives to architecture and design firm Corgan in February, and whether PJIAE has stopped paying the company.

He also asked whether PJIAE has enough money to make payroll in April and May, and whether the company will financially assist locally-owned companies at the airport.

MP Sarah Wescot-Williams of United Democrats (UD) asked about the air traffic numbers since the pandemic started, especially in relation to freight. She also questioned the measures that will be taken by the airport to secure the facility during the lockdown, mentioning reports of vandalism of an aircraft parked on the tarmac several days ago.

MP Raeyhon Peterson of Party for Progress (PFP) asked about the airport’s financial reports to Parliament and about the labour arrangements of airport workers.

“It seems a late stage to begin with mould remediation or removal, considering it is almost three years since Hurricane Irma has passed. … Could some explanation be given as to what areas of the airport will be subject to mould remediation? Has it been determined that this mould spread? Have any of these areas been trafficked by, or populated by, staff over these last two years? …

“We are facing two hurricane seasons in between completion of phase one and final delivery of the complete product. What measures will be taken to guard against the risk of a potential [hurricane – Ed.] impact? What is the status of PJIA’s [insurance] coverage with regard to calamities and disasters?” asked MP Melissa Gumbs of PFP.

He also asked whether employee parking can be placed at an off-site location so that the area can be used as additional ramp space.

MP Grisha Heyliger-Marten of UP Party also asked questions during the virtual meeting.

Some of these questions were answered by airport officials and Prime Minister Silveria Jacobs, who was also present during the meeting.

In response to Emmanuel’s question about the visit to Corgan, Mingo said it was a “reference visit.” He said PJIAE has a payment plan with Corgan and that these are ongoing.

In response to Gumbs’ question about mould remediation, Breell said that when the airport’s operations moved back into terminal building around the end of 2018, PJIAE only did mould remediation on the areas that were opened. He said remediation still needs to be undertaken on the 70 per cent of the building that is not being utilised.

Mingo said the insurance proceeds are necessary because remediation works and architectural and engineering fees cannot be paid out of the funds coming from the World Bank and the EIB.

Mingo also said the company has taken out insurance against hurricane strikes.

The other questions posed by MPs require some time for government and PJIAE to provide answers for.

The virtual meeting ended due to a lack of a quorum, as three MPs had logged off the session. The meeting is to be reconvened next week when the questions are to be answered.