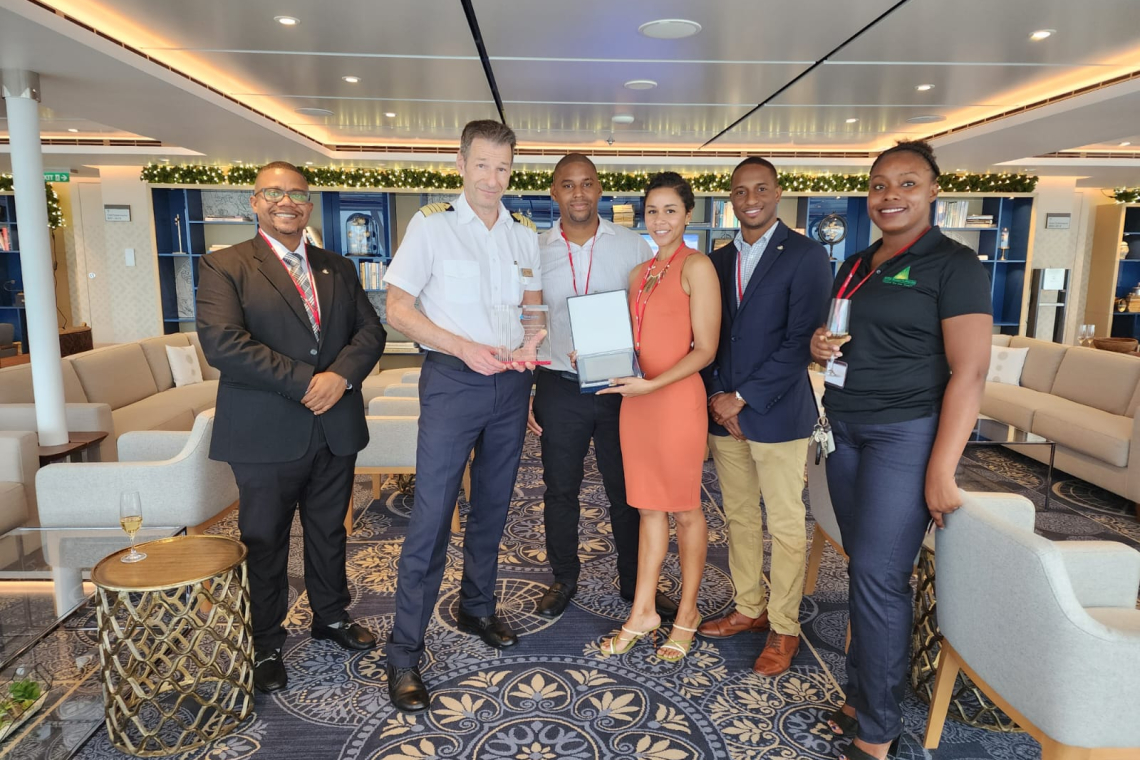 Representatives of Port St. Maarten Group, the ship’s agent, and the cabinet of the Ministry of TEATT along with the captain of Viking Neptune.

PHILIPSBURG--Two cruise ships made inaugural calls to Port St. Maarten at the beginning of the New Year, namely AIDAbella on January 2 and Celebrity Apex on January 3.

Three new cruise ships made inaugural calls for the month of December. According to Port St. Maarten Group (PSG) Chief Executive Officer (CEO) Alexander Gumbs, the arrival of the five new vessels is a strong indication of the destination’s popularity among cruise lines being a port in demand in the North-eastern Caribbean.

“The 2022-2023 cruise season is progressing very well,” Gumbs said on Sunday. “We are very pleased with the additional new vessels that have made inaugural calls so far for the season. We are moving forward with confidence as we continue to grow our cruise business.”

Celebrity Apex is the second ship in the Edge series. According to Celebrity Cruises, it has an innovative outward-facing design and visionary spaces that stand apart from anything else at sea, with the exception of its sister ship Celebrity Edge.

Celebrity Edge has cruise passenger double occupancy of 2910, and a gross tonnage of 129,500.

Celebrity Cruises is a cruise line headquartered in Miami, Florida, and a wholly-owned subsidiary of Royal Caribbean Group.

AIDAbella was built in 2008 and carries up to 2,050 passengers. The vessel has a gross tonnage of 69,203 and is the sister ship to AIDAdiva and AIDAluna. The vessel is part of the Sphinx Class and was built for AIDA Cruises.

AIDA Cruises is one of the leading tourism companies in Germany with its headquarters in Hanseatic city of Rostock. The cruise line has a fleet of 13 ships and employs 15,600 staff from 60 countries.

Viking Neptune made its inaugural call to Port St. Maarten on December 19, 2022. Viking Neptune is Viking’s 15th new ship that has been added to its overall fleet. Viking Neptune was in port with 537 guests and 461 crew. The cruise line caters to 50+ demographic and their eldest passenger onboard was 98.

The ship is identical to Viking’s other ocean ships, but this one is equipped with a small hydrogen fuel system, making it the cruise industry’s first ship to test the use of hydrogen power for onboard operations. Viking is using the small system as a test to determine how hydrogen fuel could be used at a larger scale in future newbuilds.

Viking has more than 250 awards to its name, including being the first cruise line to ever be named both the #1 Ocean Line and the #1 River Line in a single year in Travel + Leisure’s 2022 “World’s Best” Awards.

Carnival Celebration, a Carnival Cruise Line cruise ship part of the Excel-class, made its inaugural call to Port St. Maarten on December 8, 2022. Celebration made its debut at Port Miami in November.

Celebration is the second of Carnival’s new Liquefied Natural Gas (LNG)-powered ships. Its sister ship the Mardi Gras entered into service last year as the first ship in North America to run on an LNG propulsion system.

Carnival Corp. pioneered the introduction of LNG fuel in the passenger cruise sector as part of the company’s ongoing commitment to sustainability and emissions reduction.

Celebration was built by Meyer Turku shipyard in Finland and has a gross tonnage of 182,800. The vessel has 2,687 guest cabins and carries 1,735 crew.

Carnival Cruise Line is the largest cruise company in the world, based on passengers carried, and the flagship brand of Carnival Corporation & plc. Known as “America’s Cruise Line” for carrying more Americans and serving more U.S. homeports than any other, Carnival was named the four-time winner of Best Ocean Cruise Line in USA Today’s 10Best Awards and Best Domestic Cruise Line by Travel Weekly readers for five consecutive years.

Azamara Onward, a cruise ship that is part of Azamara cruise line, an upmarket company considered a leader in Destination Immersion® experiences, made its inaugural call to Port St. Maarten on December 6, 2022.

The new cruise vessel was christened on May 2, 2022, in Monte Carlo, Monaco, and thereafter departed on its maiden voyage along the Italian coast. Azamara’s entire fleet of four vessels officially returned to the high seas on May 26, 2022.

Azamara, the independent cruise line will visit 362 unique ports around the world, with 392 overnight stays, 862 late nights, and more than 3,000 shore excursions, nearly 1,000 of which have been created since the pandemic began.