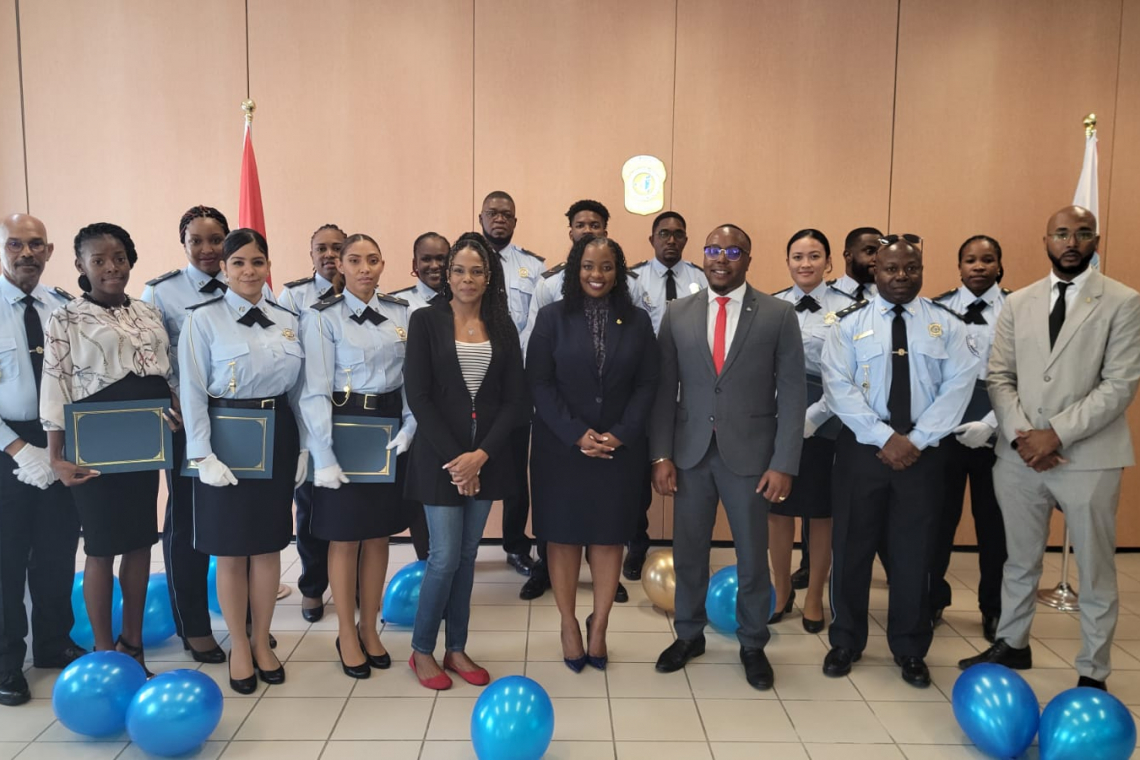 PHILIPSBURG--Twelve enthusiastic new Customs officers of the Class of 2022 took their oath in the presence of Minister of Justice Anna Richardson at a symbolic ceremony held at the Government Administration Building on Friday, April 22.

This is the first group of cadets to complete their training course carried out by the Customs Department on the directives of Minister Richardson.

The ceremony began with the cadets marching from Postal Services St. Maarten to the entrance of the Government Administration Building where they were inspected by Doran and Richardson.

Doran said: “I am very proud of the 12 cadets who have all dedicated their time to undergo training in pursuit of a law enforcement career. Our country needs and appreciates the contributions these newly-sworn-in Customs officers will make in protecting our borders. I encourage them to continue striving for excellence as they now serve as role models within our community.”

Richardson addressed the cadets during the ceremony, expressing her profound gratitude for their decision to join the justice system in the interest of safeguarding the country from harmful goods, drugs or weapons intended to enter the border.

“You have a challenging journey ahead which you have been duly prepared for, challenges where your integrity and call for duty will be greatly tested,” Richardson said. “Nonetheless, I encourage you to never stop learning and to lean on each other and your management team during challenging times, as it is only a matter of working together that we become stronger in moving this country forward.”

Customs St. Maarten Management Team member Franklin Bernadina explained that this was the first time the Customs Department had done its own recruitment and organised and executed its own training from start to finish.

“We have had much help along the way,” Bernadina said. “Minister Richardson stepped in and gave us the go-ahead to do the Customs training in-house with a deadline set for March 2022 which was met. We were committed to succeed, as we gave our word to the minister and failure was not an option.”

After recounting the days of training experienced by the cadets, he encouraged them to reflect on the words of the oath they would be taking and told them that if they abide by their oath, their integrity would never be questioned.

“During your journey as a Customs officer, you will feel overwhelmed at times, things may not go as you would expect, but you must keep moving,” Bernadina said as he addressed the cadets. “Commit to achieving excellence in all that you do and never settle.”

After Bernadina read the oath, the 12 cadets were presented with their certificates and thereafter sworn in as Customs Officers and civil servants in the government of St. Maarten by Minister Richardson.

She said she is more than elated that this is the first group of Customs officers to have been part of a graduation ceremony that will be repeated for the next batch of cadets to undergo the Customs training lasting six months.

“I take this time to thank key persons who were instrumental in seeing this training through, including Mr. Otto de Vries of Customs the Netherlands, Customs St. Maarten Management Team, Head of the St. Maarten Caribbean Coast Guard substation Mr. Roberto Levenstone, Chief of Police Carl John, Police Inspector Sharlon Cathalina and the families of the newly-sworn-in Customs officers.”

Customs St. Maarten has been strengthened over the past two years with the addition of new vehicles, x-ray scanning equipment and the procurement of software to collect much-needed data on the import and transport of goods. The department, now consisting of a total staff of 44 officers, including office personnel, will be embarking on delivering refresher courses throughout the year as needed to ensure that all Customs officers remain up-to-date on their training.