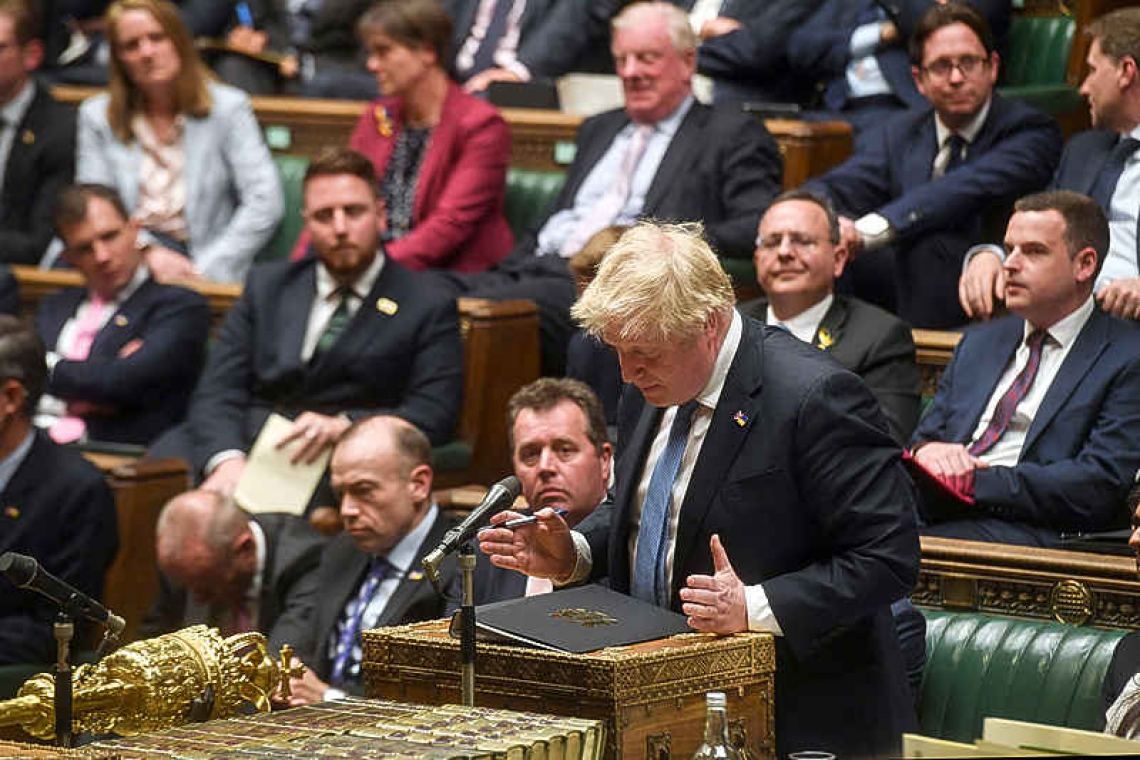 LONDON--British Prime Minister Boris Johnson apologised to parliament on Tuesday after he was fined by police for breaking lockdown rules, saying he did not know a birthday gathering at the height of the pandemic was in breach of the rules he had set.

Opposition lawmakers argue that the prime minister must go, saying he set stringent rules during COVID-19, broke those rules in Downing Street and then repeatedly lied to parliament when he said all guidelines had been met.
Johnson told the House of Commons he had not deliberately mislead parliament but said it had never occurred to him that he was in breach of the rules. He acknowledged that the public had a right to expect better.
His apology came as the Speaker of the House said a vote could be held on Thursday into whether Johnson should be investigated over claims he misled parliament. Under the ministerial code, knowingly misleading parliament is an offence that should result in resignation.
"As soon as I received the notice (from the police), I acknowledged the hurt and the anger, and I said that people had a right to expect better of their prime minister," Johnson told parliament.
Labour leader Keir Starmer accused Johnson of failing to respect the sacrifices made by the British public during lockdowns, and of demeaning his office. Urging him to resign, he said the prime minister had the chance to: "bring decency, honesty and integrity back into our politics and stop the denigration of everything that this country stands for."
Johnson told parliament in December that "all guidance was followed completely" over the lockdown restrictions. He was fined by the police last week after an internal inquiry found Downing Street held alcohol-fuelled parties at a time when people were not allowed to attend funerals or visit the sick.
Initial reports of the parties caused a furore in Britain, but pressure from Johnson's own lawmakers has abated since Russia's invasion of Ukraine, in which he has sought to play a leading role in the West's response. While a handful have repeated calls for him to go, most say now is not the time.
However Mark Harper, a former Conservative chief whip who once helped maintain party discipline, used the occasion to tell Johnson in the chamber that he needed to quit, saying he did not believe "he is worthy of the great office that he holds."
Lawmakers will now vote on Thursday on whether Johnson should be referred to parliament's privileges committee for an inquiry. However, the motion is unlikely to pass because Johnson retains the support of most lawmakers in his Conservative Party and can still command a majority in parliament.
In his first statement to parliament since being handed the fine, Johnson attempted to deflect some of the criticism by talking about other issues he is dealing with, including the war in Ukraine, the energy crisis and immigration. But the police have investigated 12 gatherings in Downing Street and the prime minister could yet be fined again.
The pressure will also build, with other Conservative lawmakers expected to take the party's performance in local elections on May 5 into account, along with voter perceptions of the prime minister. A poll by J L Partners for The Times newspaper, which asked almost 2,000 people to give their view of the prime minister in a few words, found comments from 72% of respondents were negative, compared with 16% that were positive. The most common word used was "liar", it reported. "Buffoon" featured highly.
John Whittingdale, a former Conservative minister, said that while many of his constituents were angry, now was not the time to replace the prime minister because of the war in Ukraine. "We currently face the gravest crisis in our global security for a long time and it is essential that we remain focused on beating Putin and stopping the aggression against Ukraine," he said.