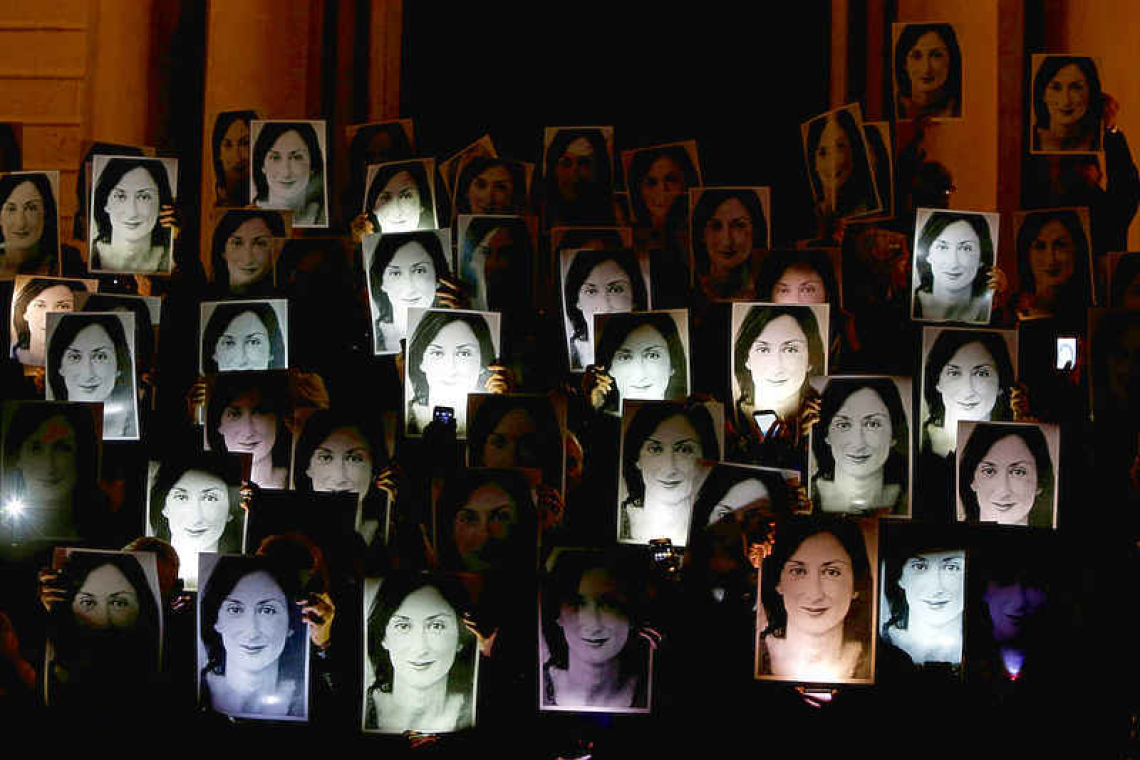 VALLETTA--When a bomb exploded on the island of Malta three years ago, killing a campaigning journalist, Daphne Caruana Galizia, it sent a tremor across Europe, seeming to sum up a growing criminal threat to those who challenged corruption.

In the days after the Oct. 16, 2017, attack, family and friends questioned whether the murderers would ever be found. In the previous 15 years, there had been 27 other criminal explosions on Malta that had killed five people. Only two of the cases had been solved, police records show.
Fast forward three years, and, while no-one has been convicted, three men have been charged with planting and triggering the bomb, while one of the country's richest businessmen, Yorgen Fenech, is in jail accused of masterminding her death. They deny the charges.
In addition, a self-confessed "middleman" named Melvin Theuma has been given a presidential pardon in return for providing evidence, including hours of secret recordings of conversations between himself and Fenech.
Paul Caruana Galizia, one of Daphne's three sons, said the truth was emerging, albeit painfully slowly. "Those who wanted to silence my mother made a terrible miscalculation," he said.
Still, evidence from preliminary hearings and a parallel public inquiry, set up by Malta's government, has done little to assuage concerns raised by Caruana Galizia's reporting that the smallest country in the European Union may be riddled with corruption.
Legal hearings since the arrest last November of Fenech have portrayed a police investigation bedeviled by leaks. Fenech is a 38-year-old multimillionaire with an array of holdings, including a stake in the country's main electricity generator, Electrogas Malta. Evidence presented by the prosecution and Fenech's defence team indicated that the accused men had access to inside knowledge throughout the police inquiry of Caruana Galizia's murder, including tip-offs about imminent arrests and surveillance. This inside knowledge, court evidence suggests, led the accused to use encryption for their phone calls and to wipe devices of data.
In court testimony, Theuma stated that most of the inside information was shared by Fenech, who was kept informed by Keith Schembri, the chief of staff of Malta's then prime minister, Joseph Muscat. In testimony to police, presented to court, Fenech said Schembri passed on "a great deal of information" about the investigation to him, including that Fenech's phone was tapped and a warning to be careful. Questioned under oath, Schembri denied leaking. He says he never discussed the case with Fenech, or with anyone not officially briefed by police.
Separately, the public inquiry, which is examining the background to Caruana Galizia's death, has heard that law enforcement authorities were reluctant to investigate her accusations of corruption, in particular those she raised against Schembri and the former energy minister, Konrad Mizzi. As previously reported by Reuters, Caruana Galizia accused Schembri and Mizzi of setting up offshore companies with the intention of accepting bribes. Caruana Galizia didn't provide proof, and both men deny the accusations.
Although no evidence has emerged that links Mizzi to the murder case, police have told the courts Schembri is a "person of interest." Schembri has been twice arrested and released without charge. The first arrest, in December 2019, was in connection with the murder; the most recent arrest, in September 2020, followed the freezing of his assets in a separate probe after a court found "reasonable suspicion" of money laundering.
Schembri denies any wrongdoing and any knowledge of the murder or its perpetrators.
Fenech denies the charges against him of complicity to murder. Instead, his lawyers have accused Schembri of instigating the murder. Under interrogation, according to police testimony, Fenech quoted Schembri as telling him: "Find someone to kill Daphne." Fenech, police testified, had told them the contract for the murder was 150,000 euros. Fenech didn't elaborate, police said.
Under the legal procedure, Fenech has not yet been required to file his defence or fully explain how he will contest the accusations. Wayne Jordash, a lawyer for Fenech, said the testimony of Theuma, the self-professed middleman in the plot, was "replete with unreliable claims and unexplained contradictions." Jordash said Fenech "urges the most scrupulous of investigations to identify the perpetrators of this terrible crime. He is confident that such an investigation will demonstrate his innocence."
The close friendship between Fenech and Schembri led, after Fenech's arrest, to the resignation of Prime Minister Muscat in December 2019. Muscat said he was stepping down to "shoulder political responsibility." Muscat, court evidence showed, was also an acquaintance of Fenech. They shared friendly WhatsApp messages, and Muscat invited Fenech to a birthday party in February 2019, even as Fenech was already under police suspicion of masterminding the killing.
Muscat, who was kept informed by police and the country's security service of the investigation's progress, said he had been told by the security service to act normally towards Fenech to avoid tipping him off.