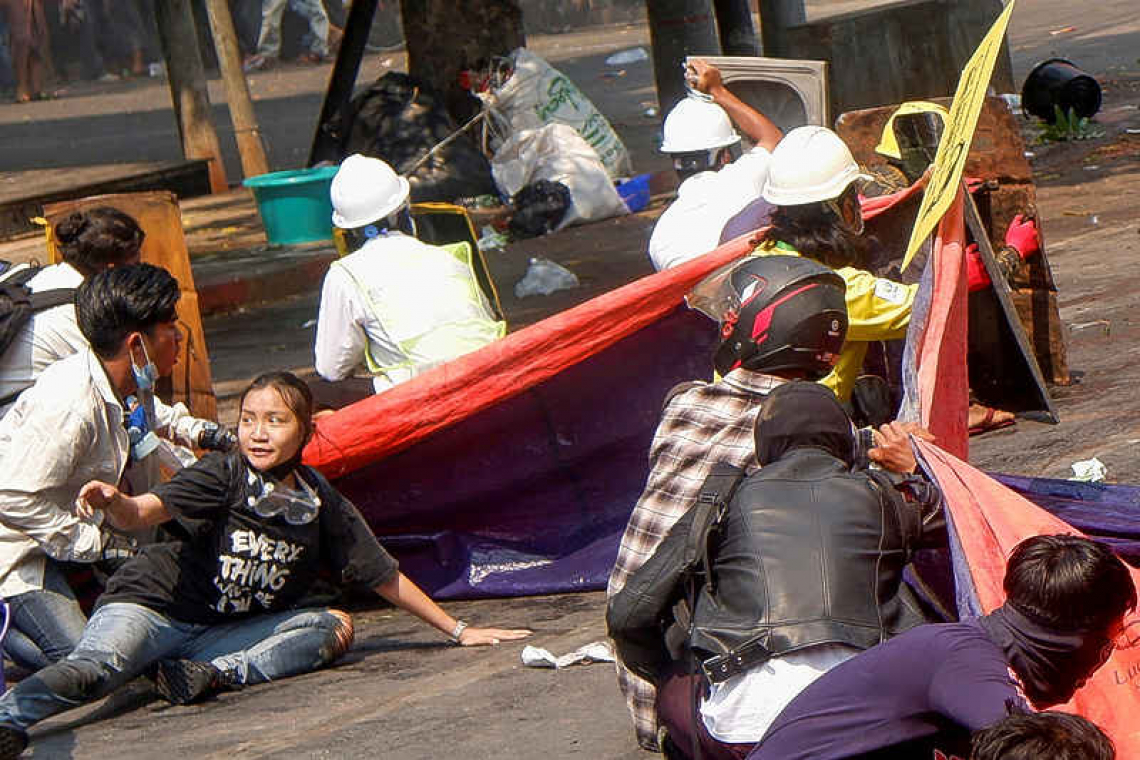 MYANMAR- - Thirty-eight people were killed in Myanmar as the military quelled protests in several towns and cities on Wednesday, the United Nations said, the most violent day since demonstrations against last month's military coup first broke out.

Police and soldiers opened fire with live rounds with little warning, witnesses said.
The bloodshed occurred one day after neighbouring countries had called for restraint in the aftermath of the military's overthrow of the elected government of Aung San Suu Kyi.
"It's horrific, it's a massacre. No words can describe the situation and our feelings," youth activist Thinzar Shunlei Yi told Reuters via a messaging app.
The dead included four children, an aid agency said. Hundreds of protesters were arrested, local media reported.
"Today it was the bloodiest day since the coup happened on the 1st of February. We had today — only today — 38 people died. We have now more than over 50 people died since the coup started, and many are wounded," United Nations special envoy on Myanmar, Christine Schraner Burgener, said in New York.
A spokesman for the ruling military council did not answer telephone calls seeking comment.
Schraner Burgener said that in conversations with Myanmar's deputy military chief Soe Win, she had warned him that the military was likely to face strong measures from some countries and isolation in retaliation for the coup.
"The answer was: 'We are used to sanctions, and we survived'," she told reporters in New York. "When I also warned they will go (into) isolation, the answer was: 'We have to learn to walk with only few friends'."
The U.N. Security Council is due to discuss the situation on Friday in a closed meeting, diplomats said.

Sustained Shooting
Ko Bo Kyi, joint secretary of Myanmar's Assistance Association for Political Prisoners rights group, had said earlier the military killed at least 18. But the toll rose by the end of the day.
In the main city Yangon, witnesses said at least eight people were killed, seven of them when security forces opened sustained fire in a neighbourhood in the north of the city in the early evening.
"I heard so much continuous firing. I lay down on the ground, they shot a lot," protester Kaung Pyae Sone Tun, 23, told Reuters.
In Washington, U.S. State Department spokesman Ned Price said the United States was "appalled" by the increase in violence. The administration of President Joe Biden was evaluating "appropriate" measures to respond and any actions would be targeted at Myanmar's military, he added.
The United States has conveyed to China that it is looking for Beijing to play a constructive role in Myanmar, the spokesman said.
The European Union said the shootings of unarmed civilians and medical workers were clear breaches of international law. It also said the military was stepping up repression of the media, with a growing number of journalists arrested and charged.
In the central town of Monywa, six people were killed, the Monywa Gazette reported. Others were killed in the second-biggest city Mandalay, the northern town of Hpakant and the central town of Myingyan.
Save the Children said in a statement four children were among the dead, including a 14-year-old boy who Radio Free Asia reported was shot dead by a soldier on a passing convoy of military trucks. The soldiers loaded his body onto a truck and left the scene, according to the report.

'We Shall Overcome'
Security forces breaking up protests in Yangon detained about 300 protesters, the Myanmar Now news agency reported.
Video posted on social media showed lines of young men, hands on heads, filing into army trucks as police and soldiers stood guard. Reuters was unable to verify the footage.
Images of a 19-year-old woman, one of two shot dead in Mandalay, showed her wearing a T-shirt that read "Everything will be OK".
Police in Yangon ordered three medics out of an ambulance, shot up the windscreen and then kicked and beat the workers with gun butts and batons, video broadcast by U.S.-funded Radio Free Asia showed. Reuters was unable to verify the video independently.
Democracy activist Esther Ze Naw told Reuters that the sacrifices of those who died would not be in vain.
"We shall overcome this and win," she said.
On Tuesday, the Association of Southeast Asian Nations (ASEAN) failed to make a breakthrough in a virtual foreign ministers' meeting on Myanmar.
While united in a call for restraint, only four members - Indonesia, Malaysia, the Philippines and Singapore - called for the release of Suu Kyi and other detainees.
"We expressed ASEAN's readiness to assist Myanmar in a positive, peaceful and constructive manner," the ASEAN chair, Brunei, said in a statement.
Myanmar's state media said the military-appointed foreign minister, Wunna Maung Lwin, attended and "apprised the meeting of voting irregularities" in the November election.
The military justified the coup by saying its complaints of voter fraud in the Nov. 8 vote were ignored. Suu Kyi's party won by a landslide, earning a second term.
The election commission said the vote was fair.
Junta leader Senior General Min Aung Hlaing has pledged to hold new elections but given no time frame. U.N. envoy Schraner Burgener said his deputy Soe Win told her that "after a year they want to have another election."
Suu Kyi, 75, has been held incommunicado since the coup but appeared at a court hearing via video conferencing this week and looked in good health, a lawyer said.