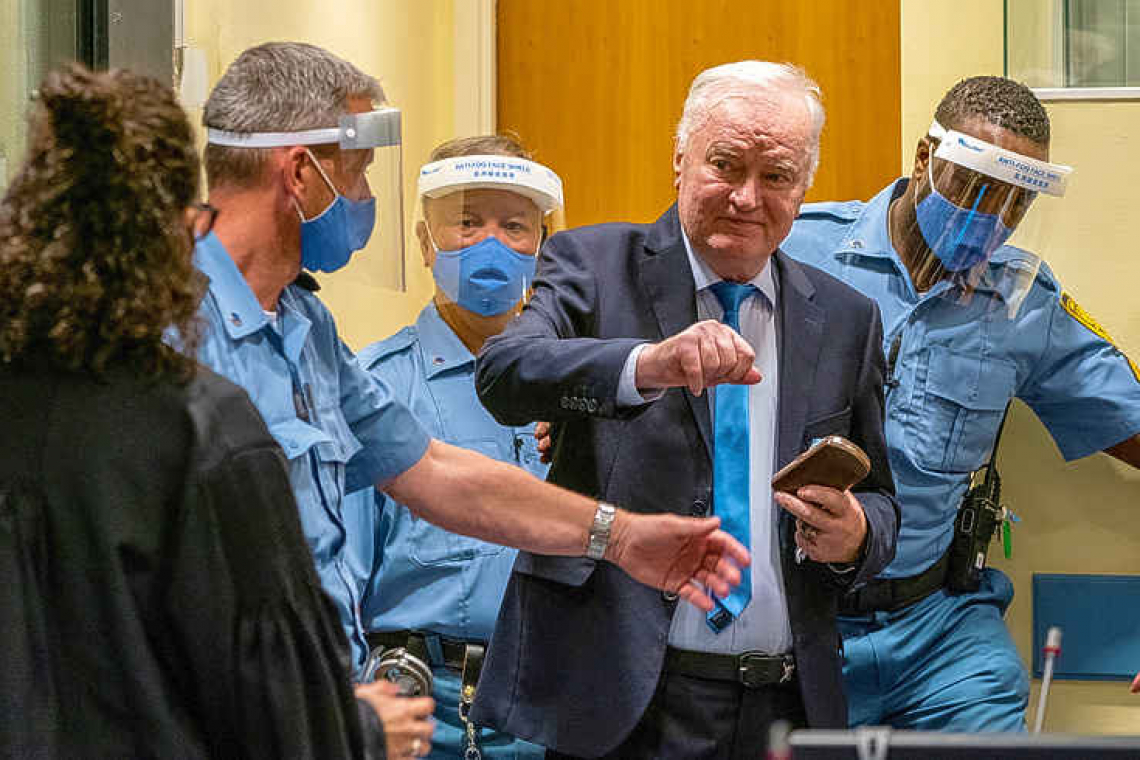 Mladic, 78, led Bosnian Serb forces during Bosnia's 1992-95 war. He was convicted in 2017 on charges of genocide, crimes against humanity and war crimes including terrorising the civilian population of the Bosnian capital Sarajevo during a 43-month siege, and the killing of more than 8,000 Muslim men and boys taken prisoner in the eastern town of Srebrenica in 1995.
"His name should be consigned to the list of history's most depraved and barbarous figures," chief tribunal prosecutor Serge Brammertz said after the verdict. He urged all officials in the ethnically divided region of former Yugoslavia to condemn the ex-general.
Mladic, who had contested both the guilty verdict and life sentence at his trial, wore a dress shirt and black suit and stood looking at the floor as the appeals judgment was read out in court in The Hague. The appeals chamber "dismisses Mladic appeal in its entirety..., dismisses the prosecution's appeal in its entirety..., affirms the sentence of life imprisonment imposed on Mladic by the trial chamber," presiding judge Prisca Nyambe said.
The outcome caps 25 years of trials at the ad hoc International Criminal Tribunal for the Former Yugoslavia, which convicted 90 people. The ICTY is one of the predecessors of the International Criminal Court, the world's first permanent war crimes court, also seated in The Hague.
"I hope that with this Mladic judgment children in (Bosnia's Serb-run entity) Republika Srpska and children in Serbia who are living in lies will read this, " Munira Subasic, whose son and husband were killed by Serb forces that overran Srebrenica, said after the ruling, highlighting Serb genocide denial.
Many Serbs still regard Mladic as a hero, not a criminal. Post-war Bosnian Serb leader Milorad Dodik, now chairing Bosnia's tripartite inter-ethnic presidency, denounced the verdict. "It's clear to us there is an attempt here to create a myth about genocide that never occurred," Dodik said.
In Washington, the White House praised the work of the U.N. tribunals in bringing perpetrators of war crimes to justice. "This historic judgment shows that those who commit horrific crimes will be held accountable. It also reinforces our shared resolve to prevent future atrocities from occurring anywhere in the world," it said in a statement.
The appeals judges said Mladic, who after his ICTY indictment was a fugitive for 16 years until his 2011 capture, would remain in custody in The Hague while arrangements were made for his transfer to a state where he will serve his sentence. It is not yet known which country will take him.
Lawyers for Mladic had argued that the former general could not be held responsible for possible crimes committed by his subordinates. They sought an acquittal or a retrial.
Prosecutors had asked the appeals panel to uphold Mladic's conviction and life sentence in full. They also wanted him to be found guilty of an additional charge of genocide over a campaign of ethnic cleansing - a drive to expel Bosnian Muslims, Croats and other non-Serbs in order to carve out a Greater Serbia - in the early years of the war that included brutal detention camps that shocked the world.
That prosecution appeal was also dismissed. The 2017 verdict found that the ethnic cleansing campaign amounted to persecution - a crime against humanity - but not genocide.
United Nations human rights chief Michelle Bachelet said on Tuesday the final Mladic ruling meant the international justice system had held him to account. "Mladic’s crimes were the abhorrent culmination of hatred stoked for political gain," Bachelet said in a statement.
The lower ICTY court ruled Mladic was part of "a criminal conspiracy" with Bosnian Serb political leaders. It also found he was in "direct contact" with then-Serbian President Slobodan Milosevic, who died in 2006 shortly before the verdict in his own ICTY trial for genocide and crimes against humanity.
Mladic was judged to have played a decisive role in some of the most gruesome crimes committed on European soil since the Nazi Holocaust of World War Two. The tribunal determined that Mladic was pivotal in the Srebrenica slaughter - which occurred in a U.N.-designated "safe area" for civilians - since he controlled both the military and police units involved.