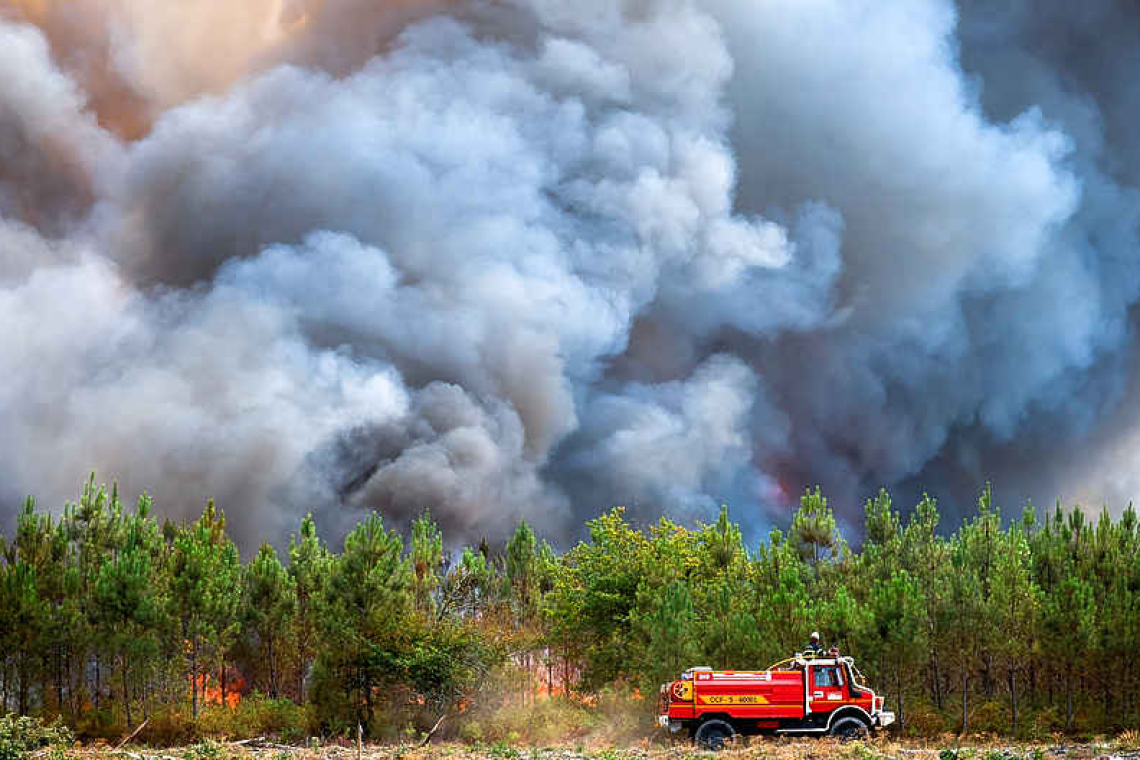 HOSTENS, France--A "monster" wildfire raged for a third day in southwestern France on Thursday, ravaging forests and forcing 10,000 people to evacuate their homes.

With no let-up in scorching temperatures likely before the weekend, firefighters backed by water-bombing aircraft battled on many fronts, saying the massive fire could change direction at any moment. "It's an ogre, it's a monster," Gregory Allione from the French firefighters body FNSPF told RTL radio.
Wildfires have broken out across Europe this summer as successive heatwaves bake the continent and renew focus on climate change risks to industry and livelihoods.
Valentine Dupy took photos of her house with her phone before being evacuated from Belin-Beliet, at the heart of the Gironde region "just in case something happens". "It was like an apocalypse. Smoke everywhere ... and planes throwing orange powder onto the fire."
Firefighters said they had managed to save her village, transformed into a ghost town after police told residents to evacuate as the flames approached. But the blaze reached the outskirts, leaving wrecked houses and charred tractors in its wake.
"We've been lucky. Our houses were saved. But you see the catastrophe all over there. Some houses could not be saved," said resident Gaetan, pointing to houses burnt to the ground.
Support was on its way from across Europe, with 361 firefighters, as well as trucks and waterbombing aircrafts, expected to back up the 1,100 French firefighters already on the ground. "We are still in the phase of (trying to) confine the fire, direct it where we want it, where there is less vegetation, where our vehicles can best position themselves ... so we can eventually fix it, control it and extinguish it," said Matthieu Jomain, a spokesperson for the Gironde firefighers.
More than 60,000 hectares (230 square miles) have gone up in flames so far in France this year, six times the full-year average for 2006-2021, data from the European Forest Fire Information System shows. French authorities said temperatures in the Gironde region would reach 40 Celsius (104 Fahrenheit) on Thursday and stay high until Saturday. Firefighters warned of an "explosive cocktail" of weather conditions, with wind and the tinder-box conditions helping fan the flames.