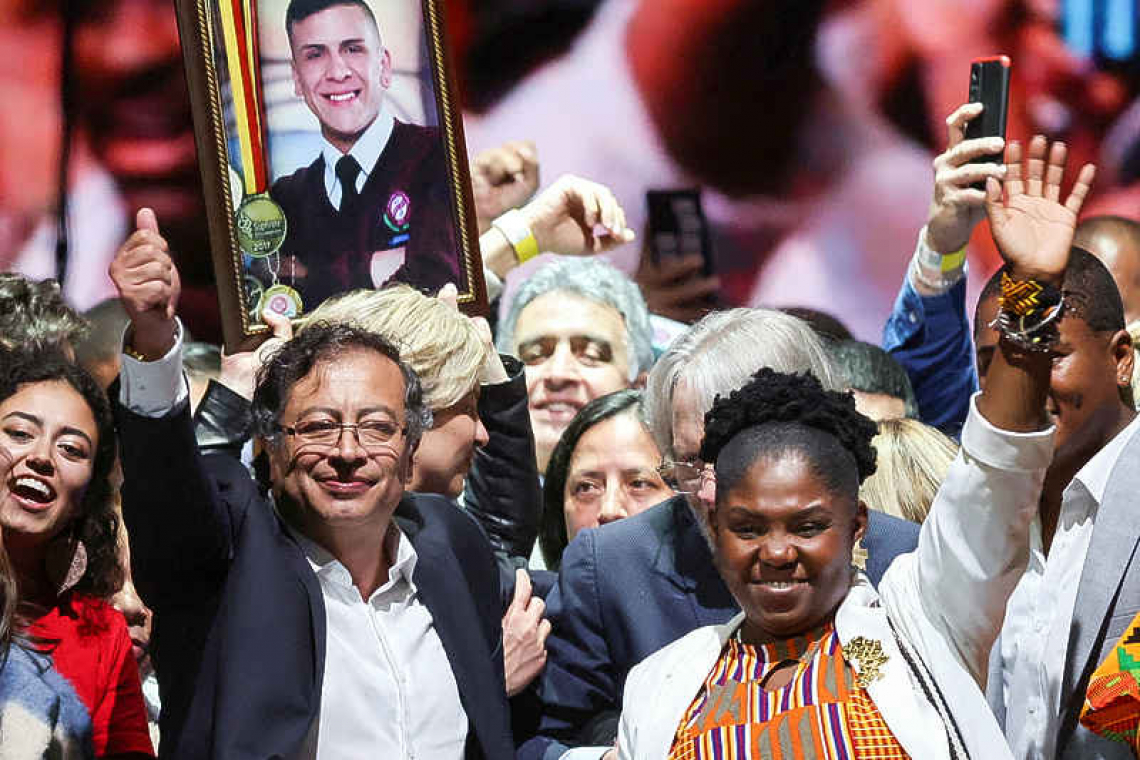 Colombian left-wing presidential candidate Gustavo Petro and his candidate for Vice-President Francia Marquez of the Historic Pact coalition celebrate after Petro's victory in the second round of the presidential election, at the Movistar Arena, in Bogota, Colombia on Sunday.

BOGOTA/BUCARAMANGA--Leftist Gustavo Petro, a former member of the M-19 guerrilla movement, who has vowed profound social and economic change, won Colombia's presidency on Sunday, the first progressive to do so in the country's history.

Petro beat construction magnate Rodolfo Hernandez with an unexpectedly wide margin of more than 700,000 votes in what analysts said was a demonstration of Colombians' eagerness for efforts to combat deep inequality.
Petro, a former mayor of capital Bogota and current senator, has pledged to fight inequality with free university education, pension reforms and high taxes on unproductive land. He won 50.5% to Hernandez's 47.3%.
Petro's proposals - especially a ban on new oil projects - have startled some investors, though he has promised to respect current contracts. His victory was likely to cause market jitters until his cabinet is announced, analysts told Reuters on Sunday.
"From today Colombia changes; Colombia is different," Petro told cheering supporters in Bogota's concert arena. "Change consists precisely in leaving behind sectarianism."
"It is not a time for hate, this government, which will begin on Aug. 7, is a government of life," he said.
Alejandro Forero, 40, who uses a wheelchair, cried as results came in. "Finally, thank God. I know he will be a good president and he will help those of us who are least privileged. This is going to change for the better," said Forero, who is unemployed.
Thousands of people took to the streets in Bogota to celebrate, with some dancing near its largest polling place under intermittent rain. This campaign was Petro's third presidential bid and his victory adds the Andean nation to a list of Latin American countries that have elected progressives in recent years. Petro's victory showed people in Colombia - where nearly half the population lives in some form of poverty - are eager to fight inequality, said Daniela Cuellar of FTI Consulting.
"What the Colombian population demonstrated today is that they are seeking a government focused on key social issues," she said. "Colombia's longstanding ailments of inequality, which were exacerbated by COVID-19, have contributed to the electorate seeking a shift."
But a fragmented congress, where a dozen parties have seats, will act as a check on Petro's proposals. "Colombia's institutional strength and rule of law appear sufficiently robust for the country to maintain economic stability," Cuellar said. "Moreover, campaigning is not governing, Petro's policies will be more moderate."
"Even if he tries to pass radical reforms, he does not have the congressional support to implement them," she added.
Petro, 62, said he was tortured by the military when he was detained for his involvement with the guerrillas, and his potential victory had high-ranking armed forces officials bracing for change. Petro's running mate, Francia Marquez, a single mother and former housekeeper, will be the country's first Afro-Colombian woman vice-president.