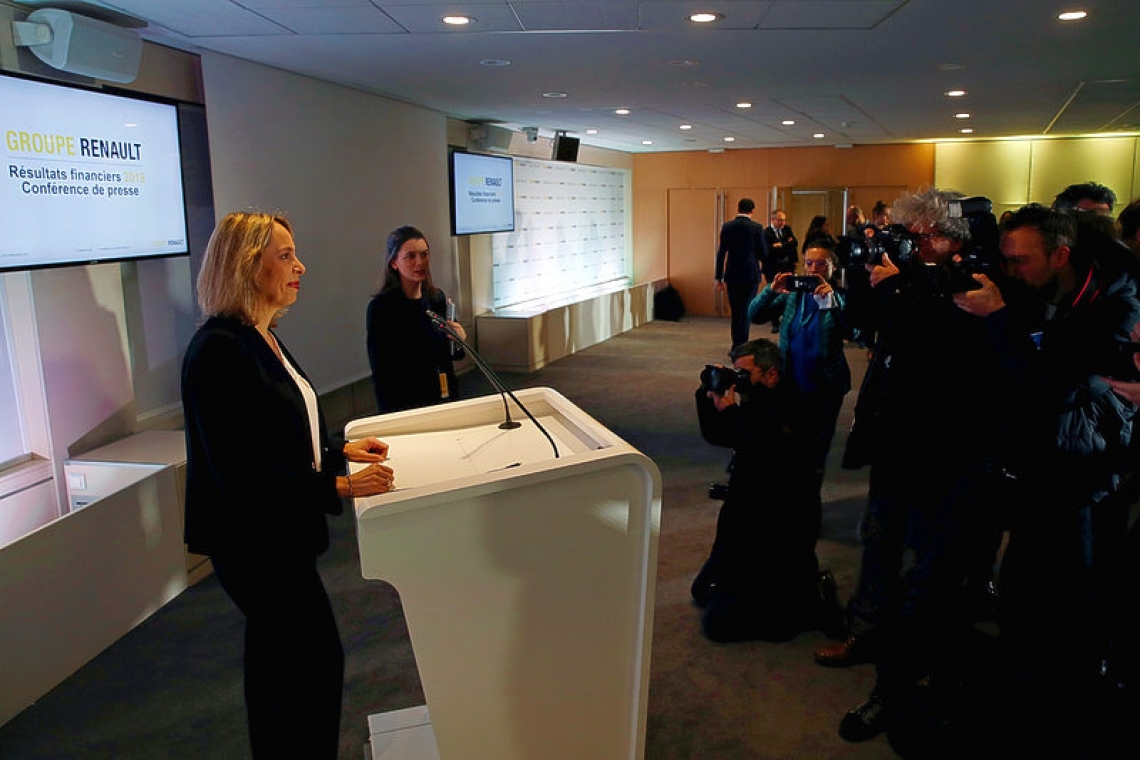 PARIS--Renault's first loss in a decade triggered a no-taboos commitment to cut costs by 2 billion euros ($2.2 billion) over the next three years from the carmaker on Friday, as it tries to put the Carlos Ghosn affair behind it.

As ex-Volkswagen brand manager Luca de Meo prepares to take over as chief executive of the French automaker, which has been rocked by the Ghosn scandal, it did not exclude job cuts in a promised review of its performance across all factories.
Like many auto industry rivals, including its alliance partner Nissan, Renault is grappling with tumbling demand in key markets like China, and said it expects the sector to be hit further this year, including in Europe. In a reflection of this sobering assessment of the market outlook, Renault set a lower operating margin target of between 3% and 4% for 2020, down from 4.8% in 2019, and cut its proposed dividend against 2019 by almost 70% from a year earlier.
While Renault faces high investment costs to produce cleaner car models and supply chain problems due to China's coronavirus outbreak, a major challenge remains moving on from the scandal involving former boss-turned fugitive Ghosn, which strained its relations with Nissan and paralysed joint projects.
"It has been a tough year for Groupe Renault and the alliance," acting Chief Executive Clotilde Delbos said on a conference call, adding that the broader autos downturn had hit the company "right when we were facing internal difficulties."
Renault could not afford to wait for De Meo's arrival in July to attack costs, Delbos said, adding that nothing would be "taboo" as it reviews its business.
Meatier goals would be made public in May, she said, alongside joint plans with Nissan, as executives repeated assurances that the alliance was on track. Delbos also stressed that Renault's automotive operational free cash flow, under scrutiny from analysts, would be positive in 2020 after stripping out restructuring costs.
"We're very confident that there is no topic on cash availability within the group," Delbos said.
Renault shares recovered from falls in early trading, and were up 1.8% at 1200 GMT despite it posting a loss of 141 million euros ($153 million) for the group share of net income. This followed charges linked to some of its Chinese joint ventures, where it said performance needed to improve, while the contribution from Nissan, in which Renault has a 43% stake, also fell and it was hit by a French deferred tax charge.
Nissan this week had its first quarterly loss in nearly ten years and cut its operating profit forecast.
Ghosn, who ran Renault and oversaw its alliance with Nissan, was arrested in Japan in late 2018 on financial misconduct charges, but fled to Lebanon in December. He has denied wrongdoing and hit out at his past employers, saying the Renault-Nissan alliance was all but dead without him.
De Meo, who used to run Seat, is taking over from Delbos, who is also Renault's financial chief and who stepped temporarily into the CEO role after Thierry Bollore, a long-standing Ghosn ally, was ousted in October.
Renault forecast that the global auto market would fall in 2020, with sales in Europe and Russia down around 3%, after it was penalised by its performance in the likes of Argentina and Turkey in 2019 and its withdrawal from Iran continued to weigh.
The group has a factory in Wuhan, the epicentre of the coronavirus epidemic, which has been in lockdown, and the firm said other plants might come on and off in the coming weeks due to supply chain interruptions. Renault's group sales fell 3.3% to 55.53 billion euros in 2019, down 2.7% at constant exchange rates, and it forecast these would be flat in 2020.