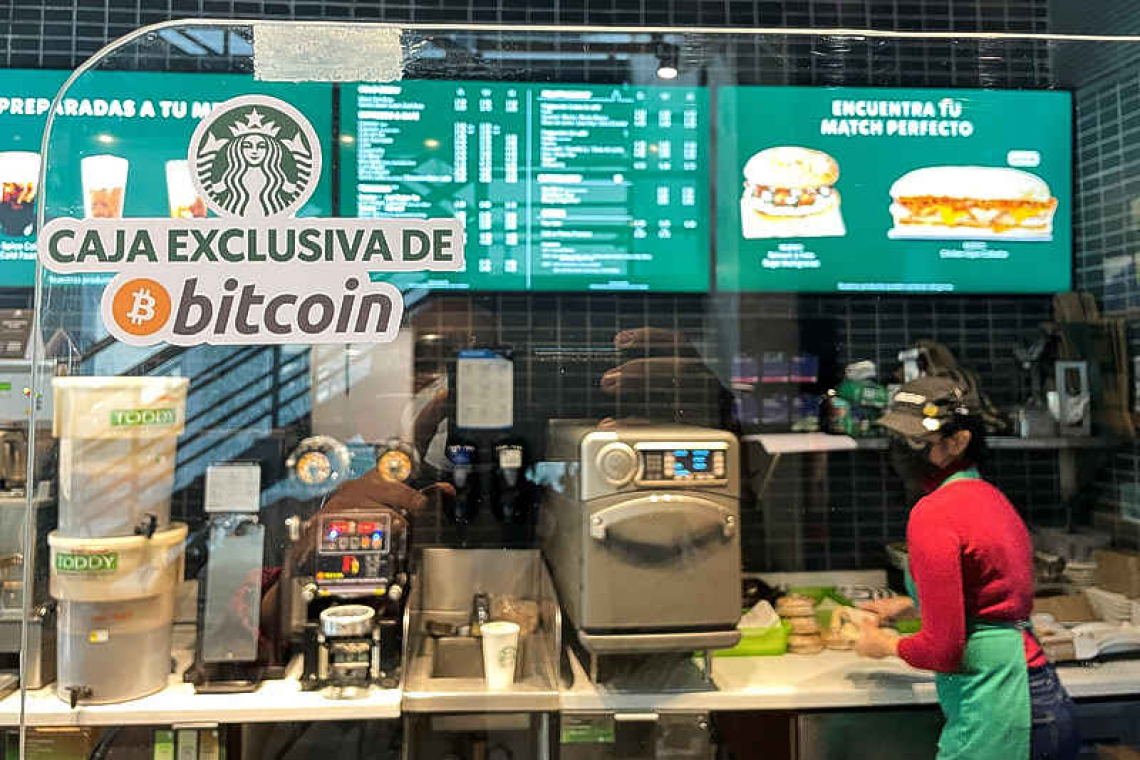 SAN SALVADOR--El Salvador's historic adoption of bitcoin as legal tender on Tuesday was beset by teething problems, as an angry protest by mistrustful citizens, technological glitches and a dip in the cryptocurrency clouded the rollout.

The bold experiment got off to a bumpy start when shortly after midnight, Salvadoran President Nayib Bukele complained the government-backed bitcoin app was not available on various internet platforms including Apple and Huawei.
Bukele used his Twitter account to press online stores to stock the app, or digital wallet, known as Chivo, and Huawei later began making it available. But when the app proved unable to cope with user registrations, the government unplugged it in order to connect to more servers and increase capacity.
Still, as the app began appearing on more platforms, Bukele was by afternoon retweeting videos posted on social media with people making payments using bitcoin at retailers in El Salvador including McDonald's Corp and Starbucks Corp. "El Salvador is taking a great step forward today," said Carlos Garcia, who went to a booth at a San Salvador shopping mall giving out advice on how the new currency would work.
Starbucks' El Salvador unit said it was accepting bitcoin for purchases at its restaurants, drive-through facilities or to go.
Promising $30 of bitcoin for each user, Bukele has pushed for its adoption, saying it will help Salvadorans save $400 million a year on commissions for remittances, while giving access to financial services to people with no bank account. "We must break the paradigms of the past," Bukele tweeted. "El Salvador has the right to advance towards the first world."
Bukele, 40, is one of the most popular presidents in the Americas, but has been accused of eroding democracy. Opinion polls showed Salvadorans are skeptical about using bitcoin, fearing its volatility and unsure of how it will work.
More than 1,000 people held a protest in San Salvador on Tuesday against the adoption of bitcoin, burning a tire and setting off fireworks in front of the Supreme Court.
As the currency's price wobbled, the government purchased an additional 150 bitcoins on Tuesday, worth around $7 million. Still, the poorest may struggle to access the technology needed to make bitcoin work in El Salvador, where nearly half the population has no internet access and many more only have spotty connectivity.
"I'm going to continue suffering with or without bitcoin," said sweets seller Jose Herrera, who said he had trouble accessing a mobile phone.
Some say the adoption of bitcoin may fuel illicit transactions and financial instability. It has already muddied the outlook for more than $1 billion in financing that El Salvador is seeking from the International Monetary Fund (IMF).
Ahead of the launch, El Salvador bought 400 bitcoins worth around $20 million, Bukele said, helping drive its price above $52,000 for the first time since May. Hours later, bitcoin had weakened and last traded down 0.51% at $46,561.74.
Ethereum, another crypto currency, fell 0.32% to $3,404.05, while crypto exchange Coinbase Global slid 4.18% after reporting delays in some transactions on its platform.
The change means businesses should accept payment in bitcoin alongside the U.S. dollar, which has been El Salvador's official currency since 2001 and will remain legal tender. It remains unclear whether businesses will be penalized if they do not accept bitcoin.
In the run-up to the launch, the government installed ATMs that allow bitcoin to be converted into dollars and withdrawn without commission from the digital wallet Chivo. Bukele blamed Apple Inc, Alphabet Inc's Google and Huawei's app download platforms for the initial Chivo delay.
"Release him! @Apple @Google and @Huawei," Bukele wrote in a tweet, which was accompanied by a red-faced "angry" emoji. The wallet was later available from Huawei and Apple.
A spokesman for Huawei said the company's platform showed less than a thousand installations by late afternoon on Tuesday. "Like all innovations, El Salvador's bitcoin process has a learning curve," Bukele said in a tweet. "Not everything will be achieved in a day, or in a month."