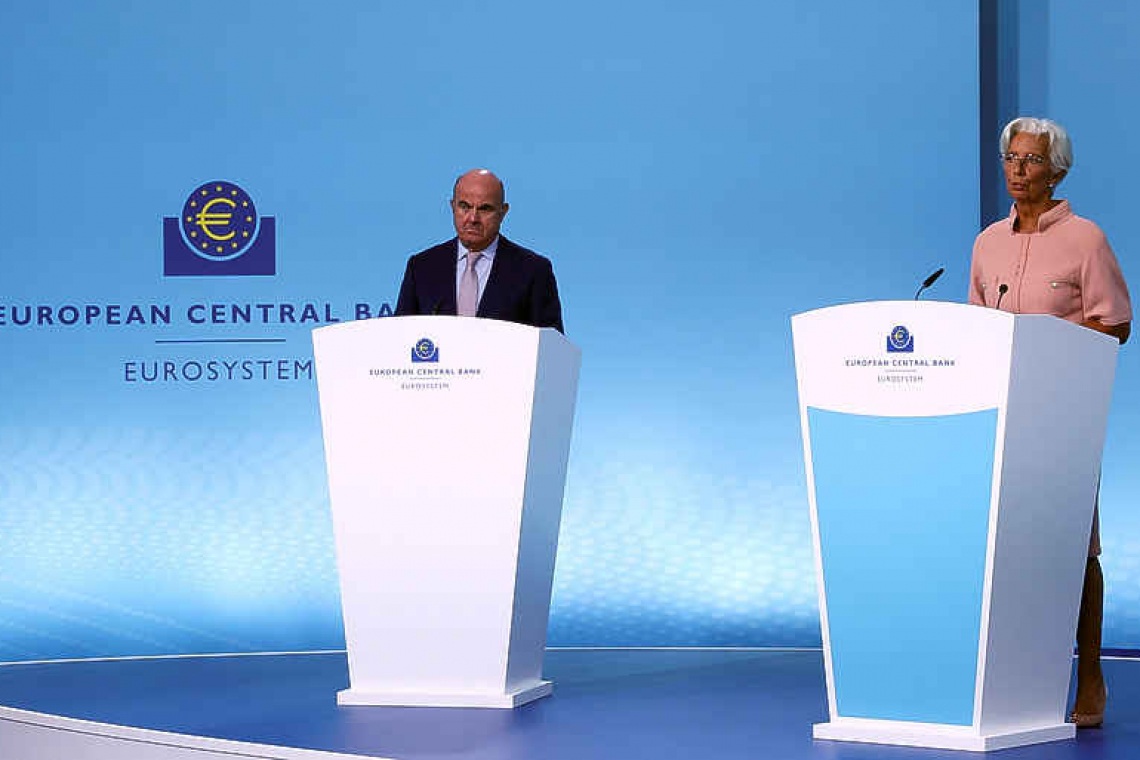 FRANKFURT--The European Central Bank will trim emergency bond purchases over the coming quarter, it said on Thursday, taking a first small step towards unwinding the emergency aid that has propped up the euro zone economy during the coronavirus pandemic.

After the ECB pulled out all the stops last year as COVID-19 ravaged the economy, high vaccination rates across Europe are bolstering recovery prospects and policymakers have been under pressure to acknowledge that the worst is over. The ECB did so by slowing the pace of its Pandemic Emergency Purchase Programme (PEPP), which has kept borrowing costs low as governments took on unprecedented amounts of debt to finance the response to the pandemic.
But with rising U.S. infection rates making the Federal Reserve hesitant to wind down its stimulus, the ECB was keen to stress it wasn't about to close the money taps. "The lady isn't tapering," ECB President Christine Lagarde told a news conference to explain the decision, using a turn of phrase reminiscent of former British Prime Minister Margaret Thatcher's famous declaration "the lady's not for turning".
"What we have done today ... unanimously, is to calibrate the pace of our purchases in order to deliver on our goal of favourable financing conditions. We have not discussed what comes next," she said.
Lagarde pushed back a decision on how to wind down the 1.85 trillion euro PEPP to December and stressed that, even if that happens, the ECB will continue keeping credit cheap in its quest to boost inflation to its target. "The day when PEPP is over ... the job is not finished because we are still targeting 2%," Lagarde said.
With the economy now on a stronger footing, the ECB said that favourable financing conditions could be maintained with a "moderately lower pace" of asset purchases compared to the 80 billion euros it bought per month during the past two quarters. It provided no numerical guidance for the three months ahead, but three sources with knowledge of the discussion said that policymakers set a monthly target of between 60 billion and 70 billion euros, with flexibility to buy more or less, depending on market conditions.
Highlighting policymakers' caution, the bank also maintained a longstanding pledge to ramp stimulus back up if markets turn and financing conditions require it.
While Lagarde struck an optimistic tone on the labour market, she stressed that future recovery prospects still depended on the continued success of Europe's vaccination programme and the trajectory of infections across the world. "We are not out of the woods, we are not on the green, as the golf players will appreciate," Lagarde said.
The ECB upgraded its growth forecast for this year to 5% from a previous 4.6% target and raised inflation expectations. Inflation is now seen at 2.2% this year, falling to 1.7% next year and 1.5% in 2023 - well below the ECB's 2% target.
Prices rose by 3% year-on-year in August, according to preliminary estimates, a commodity-fuelled pinch that is being felt by many consumers. But Lagarde said policymakers continued to believe that wage pressures were modest and that supply bottlenecks currently hitting materials and equipment would start to ease.