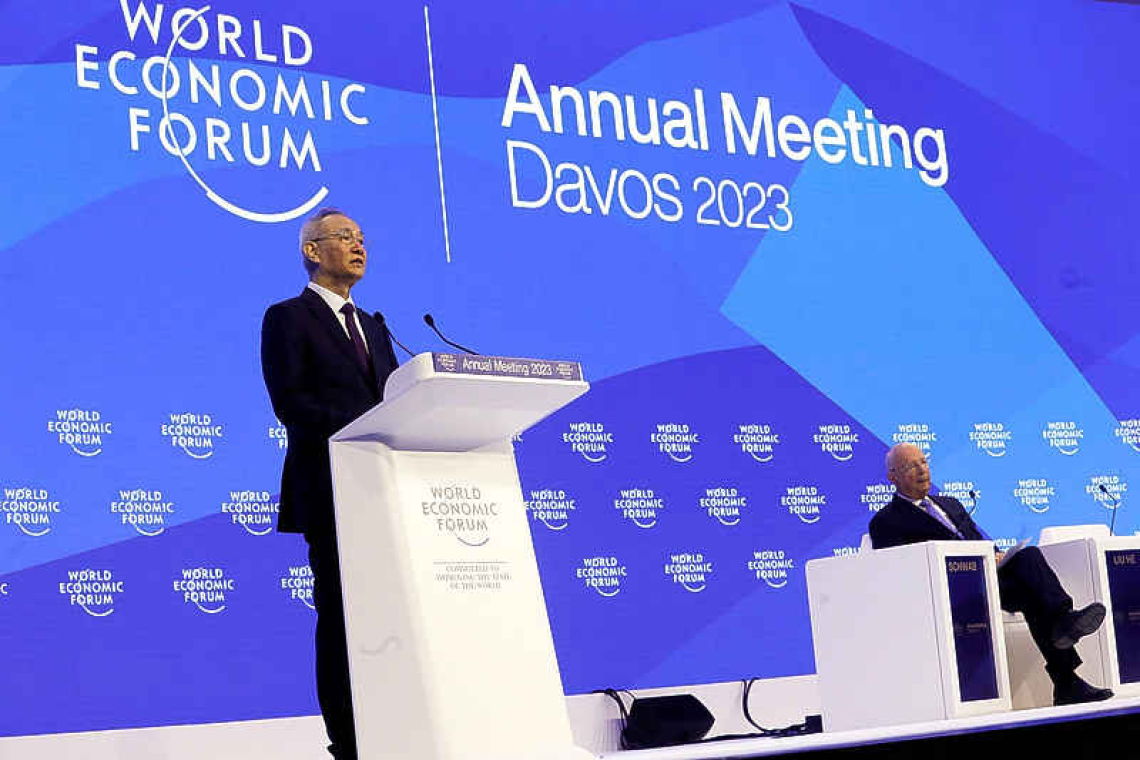 DAVOS, Switzerland--China's Vice-Premier Liu He welcomed foreign investment and declared his country open to the world on Tuesday after three years of pandemic isolation.

Liu's explicit pitch to global leaders gathered in Davos made it clear China wants international investors to play a key role in Beijing's attempts to revive its slowing economy. "Foreign investments are welcome in China, and the door to China will only open up further," Liu, a top economic tsar and confidant of President Xi Jinping, said.
His speech to the World Economic Forum's (WEF) annual meeting mentioned "strengthening international cooperation" and "maintaining world peace" 11 times. Liu made his speech as the release of new population data sounded an alarm on a demographic crisis with profound implications for the world's second largest economy. New GDP data also showed economic growth slumped in 2022 to the worst level in nearly half a century.
Liu's visit to the Swiss ski resort is the first trip abroad by a high-level Chinese delegation since Beijing abruptly began dropping its "zero-COVID" curbs that shielded its 1.4 billion people from the coronavirus last month. That policy also cut off China from the rest of the world for the past three years, stifling foreign investment.
At Davos, Liu is sitting down with CEOs of finance, tech, consumer and industrial companies, a Chinese official familiar with the matter told Reuters. He will also meet other world leaders.
In his speech, Liu said he had caught up with many old friends, having last attended Davos in 2018. Former U.S. Treasury Secretary Lawrence Summers told Reuters he spoke with Liu on Monday for more than an hour, without giving details. On Wednesday, Liu will meet U.S. Treasury Secretary Janet Yellen in Zurich for their first in-person meeting, although they have met virtually three time since she took office.
Liu's speech was another sign of Beijing's increased engagement with other countries in recent weeks. A recent thawing of relations with Australia paved the way for China to resume imports of Australian coal after a three-year halt. And in November, Chinese President Xi Jinping and U.S. President Joe Biden met on the Indonesian island of Bali where they agreed to follow-ups, including a planned visit to China by Secretary of State Antony Blinken in early 2023.
The visit by the high-level Chinese delegation to Davos also contrasted with the conspicuous absence of Russia, a key ally whose invasion of Ukraine China has refused to condemn. China's relations with the U.S. and its allies have grown more tense throughout the COVID-19 pandemic, with Beijing and Washington sparring on issues from technology to Taiwan.
The bosses of global investor Fidelity International and accountancy giant EY on Tuesday were among the business leaders attending Davos who voiced concern about a potential decoupling of the two economies. Liu's speech was aimed at addressing investor concerns, said Xingdong Chen, Chief China Economist and Head of BNPP Markets. "Liu He, on behalf of Xi, wants to clarify the policy confusion and misunderstanding, and to reassure the world China will continue the market-oriented reform and opening."
The speech, he said, explained key concepts the ruling Communist Party has been pushing, such as the Chinese model of modernization and common prosperity. "It seems the new leaders are reversing leftward policy changes and re-embarking on Deng Xiaoping’s line of reform and opening," he added.
Whether global investors and leaders buy into China's new sales pitch remains to be seen. U.S. Congressman Seth Moulton, also in Davos, said he was highly worried about China's stance on Taiwan. Moulton, a Democrat, said the shift in tone did nothing to allay his fears.
Earlier, European Commission President Ursula von der Leyen said Europe must seek to work and trade with China, rather than decouple from it. But she cautioned that Chinese subsidies were restricting access to the clean tech sector for European companies.
In addition to zero-COVID, the Chinese economy has been squeezed by a crisis in its vast property sector and a wide-ranging regulatory crackdown on sectors from technology to education, which have in turn hit foreign investment sentiment.
Liu referred to efforts by Chinese authorities to resolve a liquidity crunch in its real estate sector. He also said the country would continue to promote entrepreneurship and support the private sector, echoing recent signals from top Chinese officials that they would ease the crackdown.