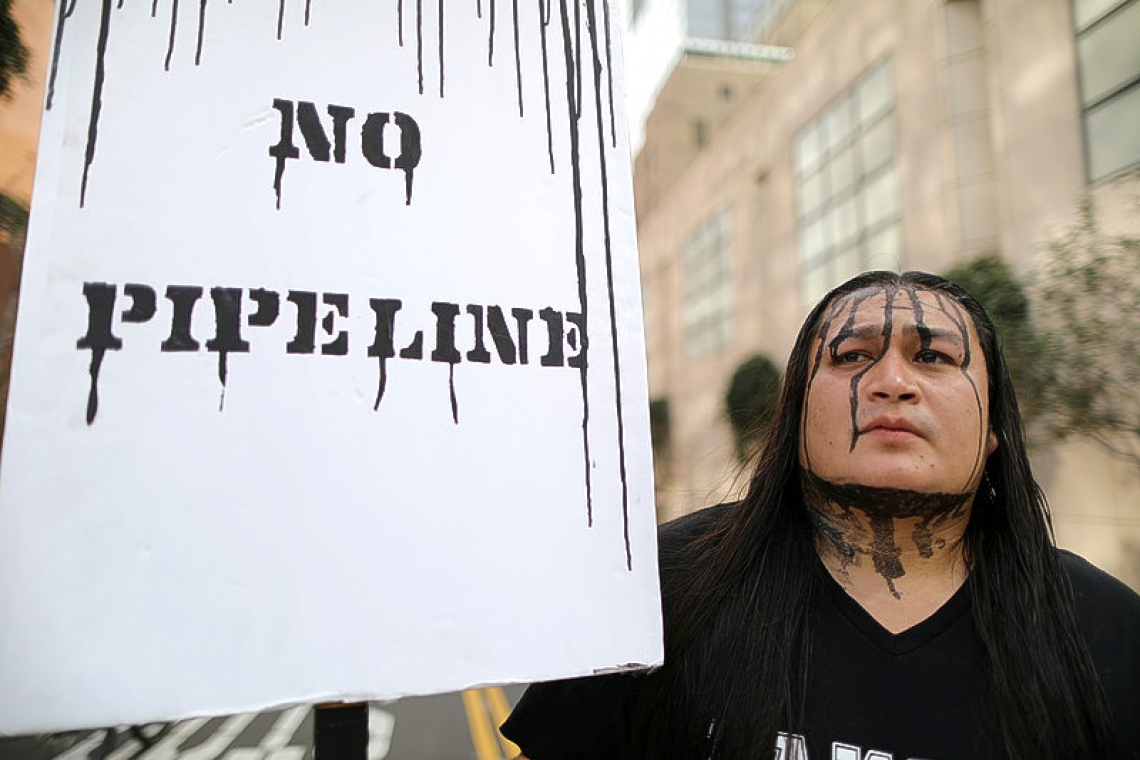 NEW YORK/WASHINGTON--A U.S. court ordered the shutdown of the Dakota Access oil pipeline on Monday over concerns about its potential environmental impact, a big win for the Native American tribes and green groups who fought the major pipeline's route across a crucial water supply for years.

The decision by U.S. District Court for the District of Columbia followed the cancellation of another high-profile U.S. pipeline project on Sunday and came as a blow to the Trump administration's efforts to lift the domestic fossil fuels industry by rolling back environmental red tape.
According to the ruling, the U.S. Army Corps of Engineers violated the National Environmental Policy Act (NEPA) when it granted an easement to Energy Transfer LP to construct and operate a segment of the oil pipeline beneath Lake Oahe in South Dakota, because they failed to produce an adequate Environmental Impact Statement (EIS).
The court ordered Energy Transfer to shut and empty the 570,000 barrel-per-day (bpd) line within 30 days, closing off the biggest artery transporting crude oil out of North Dakota's Bakken shale basin to Midwest and Gulf Coast regions.
"Given the seriousness of the Corps' NEPA error, the impossibility of a simple fix, the fact that Dakota Access did assume much of its economic risk knowingly, and the potential harm each day the pipeline operates, the Court is forced to conclude that the flow of oil must cease," it said.
It is rare for regulators or officials to force an oil pipeline to be drained, unless it is in the aftermath of a spill, oil market sources said.
Energy Transfer said it is looking at legal and administrative measures to avoid a shutdown, and was considering an appeal if those efforts fail. Preparing a thorough EIS could take about thirteen months, according to an estimate by the Army Corp.
Consultancy Rapidan Energy Group said the ruling casts long-term doubts over the future of the pipeline, which has only been operating for about three years. "With odds of a temporary stay on appeal only 30%, the court-ordered DAPL shutdown on Aug. 5 should last at least 10-12 months if Donald Trump wins re-election and permanently if not," said in a note.
The ruling comes a day after Dominion Energy Inc and Duke Energy Corp decided to abandon the $8 billion Atlantic Coast Pipeline, meant to move West Virginia natural gas to East Coast markets, after a long delay to clear legal roadblocks almost doubled its estimated cost.
Native American and environmental groups cheered the court ruling. "Today is a historic day for the Standing Rock Sioux Tribe and the many people who have supported us in the fight against the pipeline," said Chairman Mike Faith of the Standing Rock Sioux Tribe, which had led protests and legal efforts against the project. "This pipeline should have never been built here. We told them that from the beginning."
Greenpeace USA Climate Director Janet Redman called the pipeline setbacks a victory in the fight against climate change.
The Trump administration, Republican lawmakers and industry groups, meanwhile, blamed activists and said the pipeline setbacks would cost the U.S. economy. "I'm not quite sure what they're cheering except for perhaps the loss of jobs all throughout America," U.S. Energy Secretary Dan Brouillette said during an interview on Fox Business Network.
"Shutting down the Dakota Access Pipeline would have devastating consequences to North Dakota and to America's energy security. This terrible ruling should be promptly appealed," said Kevin Cramer, North Dakota Senator and Trump ally.
Democratic presidential candidate Joe Biden's campaign declined to comment.