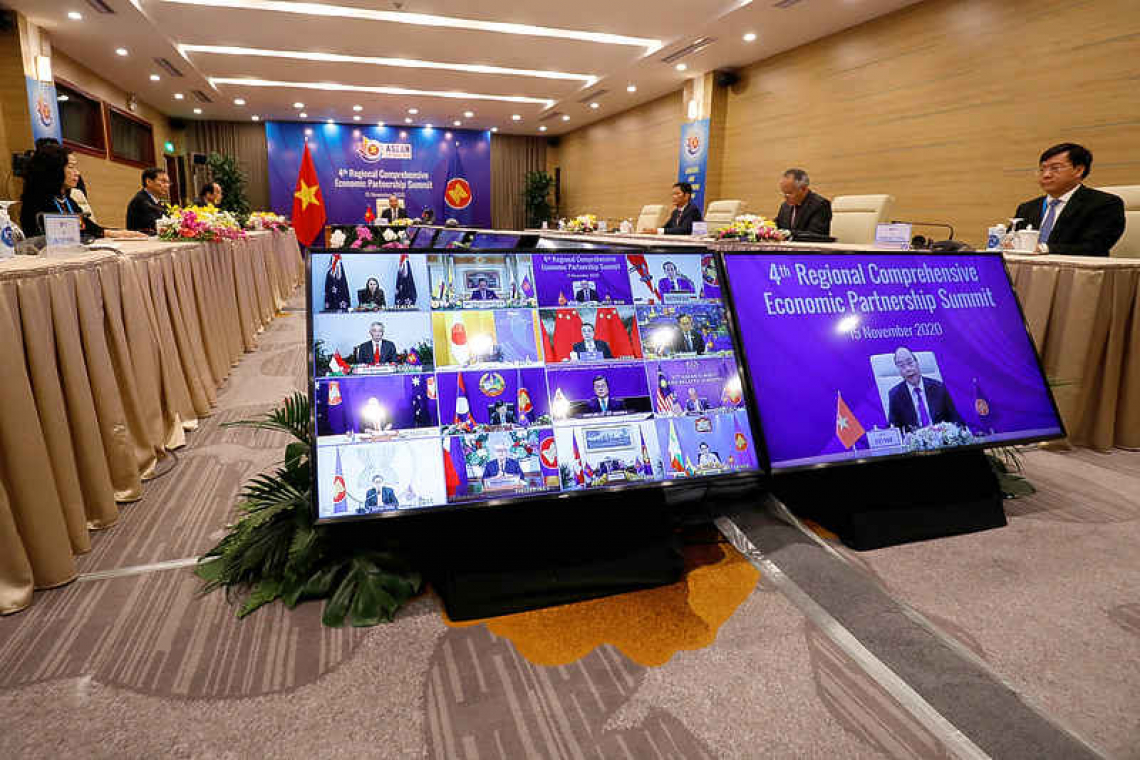 The signing of the Regional Comprehensive Economic Partnership (RCEP) at a regional summit in Hanoi, is a further blow to the group pushed by former U.S. president Barack Obama, which his successor Trump exited in 2017.
Amid questions over Washington's engagement in Asia, RCEP may cement China's position more firmly as an economic partner with Southeast Asia, Japan and Korea, putting the world's second-biggest economy in a better position to shape the region's trade rules. The United States is absent from both RCEP and the successor to the Obama-led Trans-Pacific Partnership (TPP), leaving the world's biggest economy out of two trade groups that span the fastest-growing region on earth.
By contrast, RCEP could help Beijing cut its dependence on overseas markets and technology, a shift accelerated by a deepening rift with Washington, said Iris Pang, ING chief economist for Greater China.
RCEP groups the 10-member Association of Southeast Asian Nations (ASEAN), China, Japan, South Korea, Australia and New Zealand. It aims in coming years to progressively lower tariffs across many areas.
The deal was signed on the sidelines of an online ASEAN summit held as Asian leaders address tensions in the South China Sea and tackle plans for a post-pandemic economic recovery in a region where U.S.-China rivalry has been rising. In an unusual ceremony, held virtually because of the coronavirus pandemic, leaders of RCEP countries took turns standing behind their trade ministers who, one by one, signed copies of the agreement, which they then showed triumphantly to the cameras.
"RCEP will soon be ratified by signatory countries and take effect, contributing to the post-COVID pandemic economic recovery," said Nguyen Xuan Phuc, prime minister of Vietnam, which hosted the ceremony as ASEAN chair.
RCEP will account for 30% of the global economy, 30% of the global population and reach 2.2 billion consumers, Vietnam said.
China's finance ministry said the new bloc's promises include eliminating some tariffs within the group, including some immediately and others over 10 years. There were no details on which products and which countries would see immediate reduction in tariffs.
"For the first time, China and Japan reached a bilateral tariff reduction arrangement, achieving a historic breakthrough," the ministry said in a statement, without giving further details. The deal marks the first time rival East Asian powers China, Japan and South Korea have been in a single free trade agreement.
Despite being outside RCEP and having been in the administration that propelled the TPP, President-elect Joe Biden - Obama's vice president - is unlikely to rejoin the TPP anytime soon, analysts said, as his government will have to prioritise handling the COVID-19 outbreak at home.