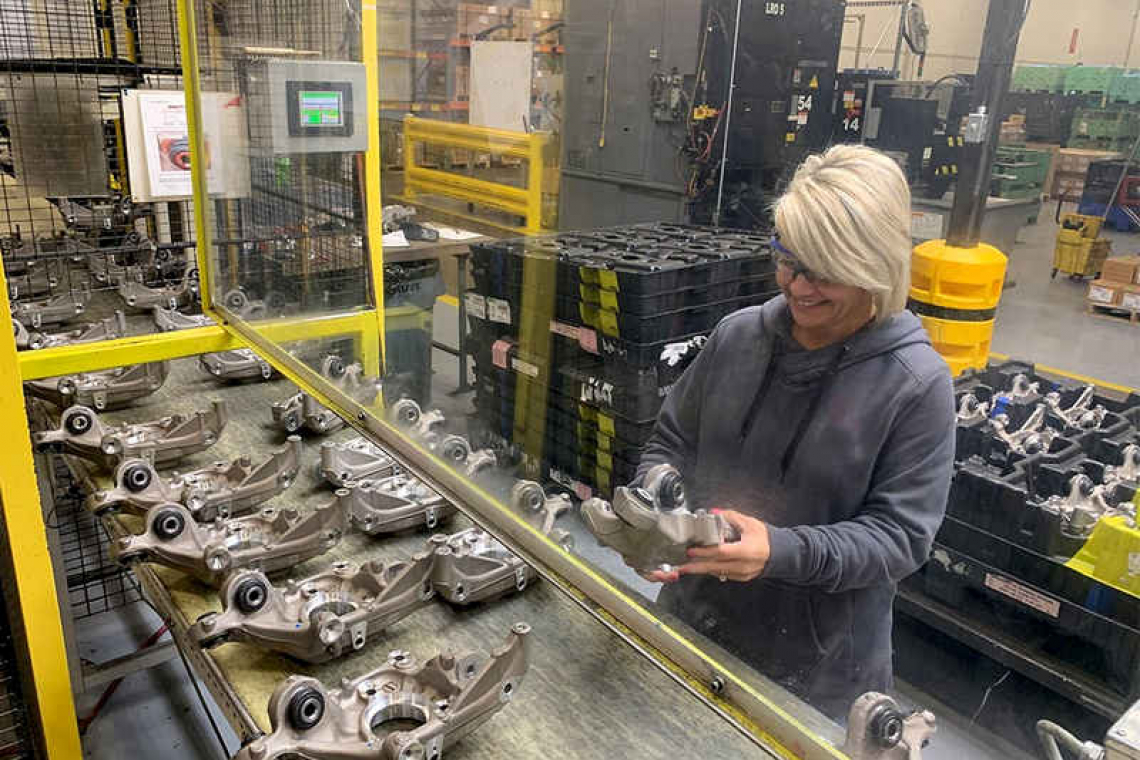 DETROIT, Michigan--Millions of U.S. workers have lost their jobs to the pandemic, but in the auto industry, suppliers are scrambling to find enough people to staff production lines, resorting to such approaches as rewards for good attendance and at-work teachers to lure job seekers.

At auto parts maker Mobex Global, Chief Executive Joe Perkins said he is boosting pay and offering bonuses to help fill 80 job openings. His engineering and machining company is running more overtime to meet rising demand.
"It is the most critical issue in our company," said Perkins, whose firm has 12 U.S. plants and counts General Motors Co and Ford Motor Co among its customers.
"We're using almost 10 staffing companies across the plants," he told Reuters. "We're using multiple jobs boards, ZipRecruiter, LinkedIn, Monster, local news stations, down to lawn signs, local papers, billboards, public transportation, church bulletins, you name it."
The U.S. auto industry usually is the first in and the last out of an economic slump. The coronavirus crisis is different. Demand for new vehicles has rebounded. But fears of catching COVID-19 and problems caring for school-age children are keeping many workers at home, compelling employers to raise pay despite the high national jobless rate, industry executives said.
Many suppliers are dealing with absenteeism rates of 10-15%, said Brian Collie, head of Boston Consulting Group's global auto practice. That has led the United Auto Workers to give the Detroit automakers more latitude on using temporary workers to cover for absent full-time employees, union President Rory Gamble told Reuters.
John Dunn, Americas CEO for Clean Energy Systems, a Plastic Omnium unit that makes fuel and emissions-reduction systems, said his company has raffled gifts to employees in reward for good attendance.
"We'd like to ship more," said Andreas Weller, CEO of aluminum parts maker Aludyne, whose company is struggling to fill 200 open jobs, mostly in western Michigan and Georgia. "We haven't shut anybody down yet, but we'd like to be in a better position in terms of inventory."
Like all companies in the auto sector, suppliers' profits were hurt during the shutdown and now they are seeing more hits as they are forced to raise pay to attract workers and run more overtime to meet demand. Hourly pay in the auto sector has crept up to $28.21 in September from $27.65 in July and $27.57 a year ago, according to the U.S. Bureau of Labor Statistics. Meanwhile, overtime at auto parts plants jumped to higher levels than before the outbreak, averaging 4.3 hours a week in August, up from 3.8 hours in January and February.
"The hottest topic has been wage, wage, wage," said Dan Spallone, a vice president with staffing company Adecco who works with Midwest manufacturers. "There has to be return on investment for candidates to re-enter the workforce." He said he has seen pay for plant workers rise as much as $5 an hour.
The pressure is even more intense for smaller suppliers as their wage rates are lower than the automakers' and large suppliers', industry officials said. The national unemployment rate stood at 7.9% in September and federal officials said people misclassifying themselves as "employed but absent from work" meant the rate actually would have been 8.3%. In durable goods manufacturing, however, the labour market is tighter, with an unemployment rate of 5.7%.
Indiana, for instance, lost almost 85,000 manufacturing jobs in March and April but subsequently regained almost 51,000 through August, bringing employment in the sector to about 501,000 people. Michigan's auto sector employment was almost halved to about 96,000 people at the height of the outbreak in April, but rebounded 71% through August.
That tighter job market has suppliers taking unusual steps to attract and retain employees. Friday pizza parties are just the price of entry. One laser mechanics company outside Detroit hired a teacher to help employees' children with their virtual schooling from the company's training room as a way to encourage attendance, according to Dan Hearsch, managing director in the auto practice for consultancy AlixPartners.
Fear of overworking employees has CEOs altering work shifts as a way to minimize overtime, industry officials said.